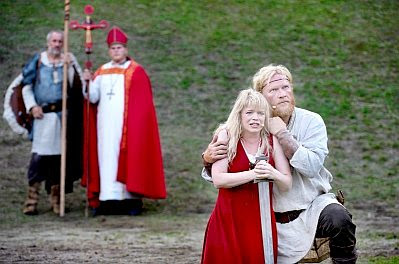 Our Norwegian correspondent The Observer has filed a follow-up report on the controversy over the historic site of Stiklestad. He includes this note:

This is another article concerning the Stiklestad controversy. It’s good to know that not everything is doom and gloom in Norway today. There are still people who are willing to stand up for their ideals and values.

I believe that we are going to see more of this, not only in Norway but all over the Western world. People have simply just had enough.

NB: Olsok is Norwegian for “Olaf’s wake”, and is a celebration for King Olaf Haraldson, who died at the battle of Stiklestad on July 29, 1030.

The translated article from Trønder-Avisa:

Stiklestad belongs to us, not the Muslims

Campaigners from all over the country will attend this summer’s Olsok celebrations in Stiklestad and demonstrate against religious dialogue on what they perceive to be sacred ground.

“Stiklestad is sacred. Stiklestad belongs to us and not the Muslims. Those who wish for dialogue can go to Medina,” says Eivind Lundager, spokesperson for the newly-formed organization.

They will be there this year and at every future Olsok as long as the threat of transforming Stiklestad exists.

The new organization began as a direct result of former Bishop of Oslo Gunnar Stålsett’s idea published in an article in Trønder-Avisa for establishing an international, permanent venue for interreligious issues and reconciliation in Stiklestad. Stålsett also proposed that the organization “Religions for Peace” should host an interreligious conference there.

There has been an intense debate in the Christian community in Norway, and detractors of Stålsett’s vision have formed an organization with branches in Levanger and Oslo. They are prepared go to Stiklestad and join forces next week where they will express their opinions on the new inter-faith proposal.

Who’s behind the new organization?

Eivind Lundager describes the organization as a popular movement based on the “Haugianske spirit’ of Hans Nilsen Hauge who had the ability to motivate people from all over the country. The organization wishes to follow Hauge’s example.

“In our group you’ll find people from all walks of life. We are teachers, historians, artists, priests and theologians. We all believe that things are heading in the wrong direction. The politicians don’t seem to realize that there are certain things that are sacred,” says Lundager, who describes himself as cross-denominational, worried that we as a society are losing our foundation.

Besides Lundager, the interim board also consists of Ragnhild Heggdal from Levanger, Arnhild Gjendem from Oslo and Greta Aune Jotun from Trondheim.

In the petition the campaigners state that Stiklestad is a unique piece of cultural history, which is important to our roots, our identity, our values and our traditions. “If other religions are allowed to establish a base here, the place of our historical roots, there is a real danger that the foundation that our nation is built upon will be weakened.”

It also states that “We have noticed that the term ‘dialogue’ is undefined, and that it can along with other diffuse peace concepts easily be misused as political leverage in the hands of an elite, in an attempt to weaken Stiklestad as an important milestone in the history of Norway, and to introduce foreign religions by means of a ‘multicultural centre’. This is completely wrong. It is also an attempt to introduce ideologies that not only challenge our historical roots and cultural heritage, but also threatens our freedom and democracy.”

The petition also states that Stiklestad needs to be protected for future generations — and that there is a need to protect it from new political and religious experiments.

Going ahead as planned

The Director of Stiklestad National Culture, centre Turid Hofstad, says that the events will go ahead as planned.

“We have registered that there are strong reactions to Gunnar Stålsett’s proposal to use Stiklestad as an arena for inter-religious dialogue. People are of course allowed to express different views and opinions, as long as they stay within the limits of the freedom of speech that exists in Norway. We don’t expect that this will interfere with the arrangements, and that these will go ahead as planned.”

Gunnar Stålsett declined to make a comment on the planned demonstration. The Petition:

Petition against a multicultural centre at Stiklestad!

On July 2, 2011, Trønder-Avisa published an article about a proposal to transform the Stiklestad National Culture centre into a multicultural centre for politics, religions and “dialogue”. The process seems to be well under way for this year’s Olsok program with the invitation of this year’s Olsok’s profile, Foreign Minister Jonas Gahr Store — whose speech in Stiklestad will be in tune with that of former Bishop of Oslo and politician Gunnar Stålsett. We disagree with this, and we have decided to establish a national organization which will employ a wide range of methods to oppose this proposal — beginning at this year’s Olsok and during every other Olsok as long as this attempt at transforming Stiklestad continues.

No to the establishment of a multicultural centre in Stiklestad!

Stiklestad is an important historical and national footprint and a very visible crossroads in the history of Norway, primarily associated with the introduction of Christianity in Norway. Olav Haraldsson is also significant in this sense by paving the way into a new era. He introduced a new national authority that helped build the nation, of which we can still see the remnants today. A new era arrived in 1030 that became an important milestone, a vision, a concept; in short, a monumental event in our history and a transition to a more civilized society. Stiklestad is still a very strong symbol and an historical footprint!

It’s a piece of cultural history which is unique to us, that belongs to our roots, our identity, our values and our traditions. The Frostating law states “With law the land shall be built, and it shall not be destroyed by illegality”. The Constitution confirms this, and the constitution can’t be changed without the people’s consent. Both the Mosaic and Christian law are cornerstones in our cultural heritage. These values were and are today helping to improve communities, and we would like to share them with others. If other religions are allowed to establish a base here, the place of our historical roots, there is a real danger that the foundation upon which our nation is built will be weakened.

We have noticed that the term” dialogue “is undefined and that it can along with diffuse peace concept easily be misused as political leverage in the hands of an elite, as means of trivializing Stiklestad’s significance as a crossroads in the history of Norway, and to introduce foreign religions by means of a “multicultural centre”. This is completely wrong. It is also an attempt to introduce ideologies that not only challenge our historical roots and cultural heritage, but also threaten our freedom and democracy.

What Norway needs now is the exact opposite. There are clear indications that ignorance, indifference and poor knowledge of history are on the rise. Our history, our values, our democracy and our identity must be made more obvious for future generations. Values that used to be, still are, and will continue to be building blocks, with norms and laws which we would love to share with others on our own terms, and not dictated by the political elite.

The Frosta Parliament is the oldest and the most unambiguous legal system in Norway. With the introduction of the Mosaic and Christian law, the Judeo-Christian building blocks that go back several thousand years, civilized societies were created, and it gave us our democracy. This is the mold, the platform and the atmosphere that gave us a nation, which again gave us our freedom which so many of our forefathers gave their lives for — and that still means a lot for us today. We still believe that this is worth fighting for. Do not rob us of our past. We had expected that one battle in Stiklestad would be enough.

It is completely senseless to transform Stiklestad, of all places, into a centre for several religions, including Islam, as former Bishop of Oslo and politician Gunnar Stålsett and the political elite are now proposing, without consulting the people first. It’s a sign of a democratic deficit. What about our voices? This “dialogue” would perhaps be more useful in a place like Medina in Saudi Arabia? Foreign Minister Jonas Gahr Store, Prime Minister Jens Stoltenberg, and former Oslo Bishop Gunnar Stålsett should perhaps take their dialog there? By all means they can bring their own well-groomed camels, desert, and private cemetery. Stiklestad is not the correct location to host a “multicultural” experiment, nor is it the correct location to throw around political rhetoric linked to undefined dialogue or vague peace terms.

Where are the politicians who will defend our values? Where are our bishops? Where are our Christian leaders? If they have lost the voice that reflects our real values we reserve the right to choose new leaders, who are better able to serve the people they are meant to represent — that are more in line with what we have mentioned here and with the cultural heritage that goes back to Stiklestad in 1030.

Do not rob us of our history!

Do not destroy our historical roots!

Do not destroy our values and heritage!

Protect Stiklestad for future generations — and protect it from new political and religious experiments!