The Heritage Foundation has a few things to say about our mind-bending tax burden: [Emphases throughout this post are mine — D]

While Democrats want tax increases on the table in debt negotiations, Republicans have reiterated their “no tax-hike” stance — a position they reiterated following… [the latest] unemployment report that revealed only a measly 18,000 jobs were created last month.

In reality, 18K jobs in an economy the size of America’s is so horrifically minuscule that if President Obama truly understood the ramifications of these numbers, he’d crawl under his desk until someone came to take him away. 18,000 jobs = EPIC FAIL by even a statist’s definition.

As the Baron said over coffee, the mistake the Republicans made this past week was in even considering “negotiating” with the Dems. Democrats don’t “do” good-faith negotiation; that attitude is a top-down problem, starting in the Oval Office and sifting finally onto the heads of us regular folks. Obama thinks we shouldn’t be worrying about things like the debt. In the short video below the fold, O tells us to go out and live our ordinary lives and let the professionals take care of the Debt. In other words, please don’t notice that he has no idea how to fix this mess. But he doesn’t need to know; he’s the One We Were waiting For. He’s Godot.

If that [the 18K jobs increase] isn’t enough reason to keep Democrats from proposing tax increases, perhaps the ambiguity of our nation’s economic future is.Americans are set to face the highest tax burden in history. Families will be hit by unprecedented taxation levels by 2020 without the extension of current tax rates. This means more economic stagnation and less prosperity.

What part of Obama’s “I won” rulebook do Republicans not understand? Present-day Dems do not negotiate, they strong arm, smear and threaten. (Think of the nomenklatura minus assassinations.) 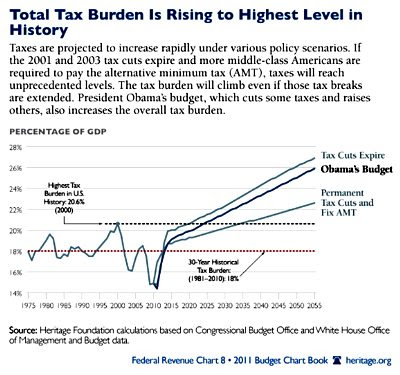 [Blogger image sizes are limited. To see a larger version of the chart go here].

In that same post, the Heritage Foundation gives the credit to ALEC:

The American Legislative Exchange Council has found that higher taxes, new spending, and more debt will deepen the financial crisis. If tax hikes are included in any sort of deal, it is only a matter of time before workers, employers and the entire nation are burdened by more than they can handle.

The Debt isn’t rocket science, but our president says Americans shouldn’t worry their cute li’l heads about it. This subject is for professional politicians only:

[Thanks to CNS for the video]

The man’s evasions, condescension (not to mention his high-fivin’shuckin’ and jivin’) continue to astound. In reality, he’s clueless about how the free-market system operates. Or rather, what of it he understands, he dislikes. He didn’t make his millions by starting up a business and hiring people. Instead, he learned early on to milk the Government Goat and he thinks y’all should do the same.

The lawyer/blogger at Legal Insurrection perfectly posed our Feckless Fearless Leader in his own self-created dilemma. Hard to feel sorry for a man who “done it to his ownself” as they say around here:

The only way for Obama to stimulate the enormous private sector job growth needed to ensure Obama’s reelection is for Obama to announce he is not running for reelection, which would unleash a wave of investment and economic activity not seen since the Great Depression.

This ginormous problem is “Obama’s Catch 2012” and it should catch on… so to speak. If the Republicans don’t send that one viral, then they’re even more clueless than we’ve been led to believe by watching their naïve behavior in trying to negotiate with Democrats. They’ve now set themselves up by the mere act of sitting down with the Treachery Team: now if they refuse to raise taxes the Dems will say Republicans don’t care about The Debt. However, if they agree to the Dems’ terms for upping the tax rate, their voters back home will can ’em.

Will someone please tell the Republicans they won? According to our President, victory means you never have to consult with the losing side. In the other ear, mention the sad fact that the Losers are determined to take us all down with them.

21 thoughts on “Let The Professionals Do It (To You, One More Time)”