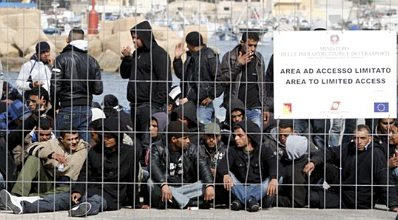 Only a trickle of additional Mediterranean refugees have landed in Europe (or been rescued) since I filed my most recent report.

What would be a laughably small batch of culture-enrichers to the Italians seems enormous to the Spaniards, who are apparently not yet used to the “Camp of the Saints” crisis. The following report describes the number of rescued migrants (67) as “incredible”, perhaps because of the tiny raft they were crammed into:

COASTGUARD services rescued an incredible 67 would-be immigrants attempting to enter Spain via the ‘back door’ on a jerry-built raft on Monday. They were found 30 miles out to sea off the coast of Motril (Granada) and are said to be in a good state of health, despite their ordeal. The majority are sub-Saharan Africans, although there are also some Arabs from northern Africa and a few who appear to be of Chinese origin. Among the huge crew were two women — one of whom is pregnant — and a baby. Emergency services were tipped off on Sunday night by Moroccan authorities about a boat which had been seen leaving the Alhucemas area and heading for Spain. They were finally reached about 24 hours later, and given first aid by Red Cross volunteers once they had been brought to dry land,. All 67 of them have been placed in a National Police shelter, and will soon be sent to the Immigration Centre for the Andalucía region.

Another fifty-two refugees landed in Calabria, near the toe of the Italian boot. This particular group consisted mainly of Afghans, Iranians, and Syrians, which means they probably originated in the Balkans or Turkey rather than North Africa:

(AGI) Reggio Calabria — A total of 52 migrants landed on Calabria’s Riace coast onboard a sailboat. The party of 52 were identified as mostly Afghan nationals, along with Iranians and Syrians. Twenty were children, fifteen were women. Their health condition is described as good. The vessel was taken into the port of Roccella Ionica.

The final story in tonight’s roundup is a follow-up to one of Thursday night’s items about a boatload of enrichment that neither Malta nor Italy wanted to accept. The would-be immigrants (originally reported as 111, but now listed as 114) were rescued by a Spanish military vessel in international waters, and were not allowed to land in Malta.

Surprisingly enough, the refugees have now been returned to Tunisia:

According to information provided by the Spanish Ministry of Defence, the Spanish frigate Almirante Juan de Borbón sailed to Tunisia earlier this morning (16 July) and, while remaining outside Tunisian waters near Zarzis, transferred the remaining 106 rescued migrants to the Carthage, a Tunisian naval vessel. 114 migrants were initially rescued by the Spanish ship. 5 of the migrants were airlifted to Malta for medical reasons on 13 July. On 11 July, shortly after the initial rescue of the migrant boat, 3 migrants were evacuated and turned over to Tunisian authorities. The original 114 consisted of 88 men, 20 women (5 of whom are pregnant), and 6 children. The Defence Ministry said that the decision to transfer the migrants to Tunisian authorities was a NATO decision.

While the decision to disembark the migrants in Tunisia is better than sending them to eastern Libya (something I was fearful would occur), Tunisia is problematic for several reasons. The migrant boat was reportedly carrying Tunisians. To the extent that any of them may have had claims for international protection, the claims have been effectively eliminated. It is not known whether any efforts were made to assess whether any of the Tunisians had claims for international protection. And to the extent that any of the non-Tunisians have claims for international protection, Tunisia is clearly less able to handle such claims and less able to provide care for asylum seekers relative to Malta, Italy, or Spain (or any of the NATO countries participating in Operation Unified Protector).

One would think that the decision was against EU “human rights” rules that forbid returning asylum-seekers to countries where they might be persecuted. Two possible reasons for this exception suggest themselves:

One thought on “Camp of the Saints: Back to Tunisia”