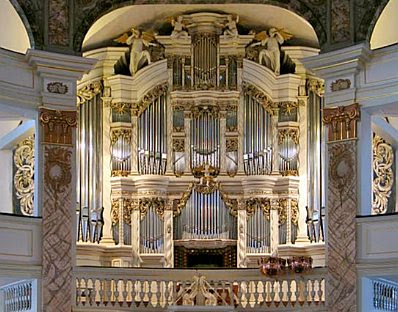 From time to time it’s salutary to step back a pace or two from the humdrum slog of Counterjihad work and reflect once again on why we fight.

There are a lot of reasons why we resist Islamization. Some of them are abstract: we fight for our countries, or for liberty, or for the preservation of Western values.

Others are more specific: our children, our wives, our friends, our homes, the town where we were born.

And then there are grander reasons that are harder to put a name to. These may involve religious feelings, or aesthetic experiences, or some combination of both. They will probably be the things that move us the most, that touch that hidden place in the soul from which our deepest motivations emerge.

The other day I was struck with such a moment while listening to the works of Johann Sebastian Bach being played on a pipe organ, and watching the hands and feet of the musician who made the music come to life. I knew then that this was, among many other reasons, why I get up every morning and roll the stone up the hill yet one more time.

The Baroque pipe organ is the apotheosis of the West. Nothing we have ever created is finer than this. Science, industry, technical skill, patient learning, and artistic inspiration have joined forces to produce the organs and the music that is performed on them.

The organs themselves are technological marvels, superbly crafted and physically gorgeous. Tier on tier of pipes, carved and gilded scrollwork, angels and caryatids supporting the frames… and when they channel the soul of Johann Sebastian Bach, there is nothing on earth more sublime.

This is as good as it gets.

There is no ideology in this, none at all. The sole purpose of all of the sweat and learning and training and hardship is to create in the listener (and the performer) a moment of aesthetic rapture, all in the service of the greater glory of God. There is nothing more.

But ideology may well destroy it. Just as there are no longer any Buddhas at Bamiyan, nor any Buddhists to carve them or contemplate them, there may come a day when all the pipes lie strewn across the paving stones of a shattered building, with no more fingers to race across the keyboards nor feet to tap the pedals.

That’s one of the main reasons why I do what I do: so that this shall not pass from the face of the earth.

One of the joys of YouTube is to be able to watch the master organists at work while listening to the music they produce. This essay was inspired by the video below, in which Hans Andre Stamm plays the fugue from J.S. Bach’s Fantasia and Fugue in G minor, BWV 542 (at times numbered BWV 541/2, for some reason), on the recently renovated Trost Organ at the church in Waltershausen, Germany:

The audio in this performance may not be the best, but the video offers a clear view of the organist’s hands and feet doing their marvelous work, and also gives us a look at the organ itself.

It wasn’t until I was well into middle age that I acquired a taste for pipe organ music, particularly Bach. For some reason it’s not something that many young people take to. It requires close attention and the patience to understand an archaic musical idiom. But once the ear is tuned properly — what magnificence!

They say that Bach is a mathematician’s musician, and it’s certainly true for me. His music is like mathematics turned into pure sound, and nothing is more mathematically perfect than one of his fugues played on a pipe organ.

The history of the pipe organ stretches all the way back into Greek antiquity. Simpler versions were used to accompany liturgical singing in the Middle Ages, but it wasn’t until the 16th, 17th, and 18th centuries that the complex organ that we know today was perfected.

Given their size and the expense of their construction, pipe organs were confined mostly to churches. There were organs in the Catholic churches of France, and some in England, but the finest examples were designed and built in Germany, Switzerland, and the Low Countries. The great organ composers — Samuel Scheidt, Johann Pachelbel, Dietrich Buxtehude, not to mention the greatest of all the organ masters, Johann Sebastian Bach — were German-speaking and Protestant. George Frideric Handel and Georg Philipp Telemann also composed for the organ, although that was not their primary oeuvre.

We think of the Lutheran Church as stern and austere, yet from it came the most sumptuous and extravagant music of the Baroque period. And all of that strenuous finger-numbing labor in cold, dim churches and cathedrals was driven by a religious fervor that we can barely comprehend three centuries later.

Yet the music lives on.

That’s why I fight: to keep the Taliban out of the organ loft.

For those who are interested, there is a pipe organ blog.