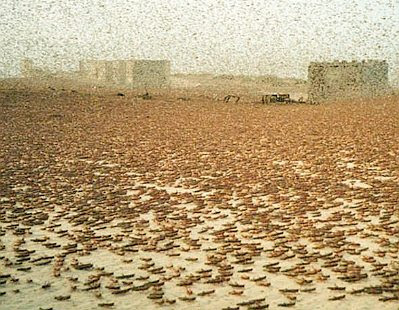 In the comments on last night’s “Camp of the Saints” post, randian had this to say:

I’m a little surprised they’re going for Italy. They could have overwhelmed Cyprus instead and functionally conquered it for Islam.

This is a good point. Why wouldn’t the Muslim invasion zero in on Cyprus as a strategic target?

I offered this response:

They would not be able to live well on the infidel’s dime on Cyprus. That’s the difference.

If they overwhelmed Cyprus, they would exhaust its resources very quickly, and soon be reduced to raiding one another to live (unless the UN stepped in with lots of aid, of course).

Italy is not the destination of choice. It just happens to be a Western nation of relative wealth and is the easiest to reach. The ultimate enrichment targets are Germany, the Netherlands, the UK, and Sweden. Word goes out through the ethnic networks about which places offer the fattest living for the least effort, and the enrichers tend to head for those places.

Ideology doesn’t have to be involved, except for the universal no-frills core principle that every Muslim takes in with his mother’s milk: “It is my right to take from the kafir as much as I can get, without ever having to give anything back.”

To conceive of the Islamic invasion as a centrally-directed process is to misunderstand its nature and impose a Western model of behavior on the collective psychological, social, and political actions of Muslims.

Overall Islamic strategy is not coherent and well-organized, no matter how shrewd and effective any of its individual actors and groups may be. To conceive of it as a political entity with a dictator or single decision-making body is to miss the point.

Islam is effective precisely because it is a distributed phenomenon, and utilizes what might be called a micro-ideology — a small set of easily-understood instructions that are encoded and replicated in hundreds of millions of minds across the length and breadth of the Ummah.

The last instruction is the engine of the Islamic conquest of non-Muslim lands. The exploitation of the infidel may involve a full violent jihad. It may also take the form of razzia — armed raids, pillaging, looting, rapine, and destruction.

In 21st-century Europe, Canada, and the United States, however, the preferred method is what has been called the “stealth jihad” — the gradual but steady infiltration, occupation, and subversion of Western countries.

This does not need to be a hierarchically-arranged and centrally-directed process to be effective. In fact, a full onslaught organized by an outside political entity would be detected and countered, because this is the traditional form of political conflict which the West recognizes, and in which it is supreme.

The stealth jihad in all its forms is the only strategy which can conquer the West, and it is very effective indeed, since our political systems have no template that includes it. We cannot fit it into any conceptual framework, and seem unable or unwilling to devise a new one that would allow us to deal with it effectively.

If the invaders were to attempt to overwhelm Cyprus, this would be recognized as dangerous external aggression (at least by the Greeks) and would trigger a traditional auto-immune response. Islam seems to understand this fact, in its distributed and decentralized fashion, and has devised strategies that are much more effective over the long term.

Most of the boat people who arrive on Lampedusa or Pantelleria do not view themselves as the vanguard of an Islamic invasion. They come with all the various motivations that you would expect from a group of poverty-stricken and mostly illiterate refugees — fear of repression and violence back home, a desperate search for a better means of subsistence, the desire to take advantage of the legendary bounty of Europe, etc.

However, since they carry within themselves the encoded instructions of Islamic micro-ideology, their modus operandi will be one of rapacious exploitation. They will have no moral scruples of the sort that a Westerner would understand, and feel no shame or embarrassment about being indolent parasites upon their infidel hosts — the simplified Islam they bring with them tells them that this is exactly their due, their basic right as members of a superior social group living amidst their inferiors.

Individual behavior driven by this imperative, when multiplied by thousands or millions, aggregates into an Islamic conquest. Not necessarily suddenly. It doesn’t have to happen all at once. Gradually, over decades, there are more and more Muslims. Always taking, taking, taking from the kuffar. Slowly, imperceptibly, as they become more numerous, our system fades away and is replaced by theirs.

In the long run, Islamic exploitation always fails. The parasite always kills its host. The process takes centuries — the glory of the Persians and the Byzantines persisted for a long time after the Islamic conquest. But in the end their lights guttered and died, and they became corrupt and backward satrapies until the magic of petroleum revived them.

A locust swarm is not guided by centralized direction, nor is there an overall strategy to its voracity when it destroys everything in its path. Each individual locust carries a simple set of instinctive imperatives that tell it when to eat, breed, migrate, and swarm.

No ideology is necessary. No boss needs to issue instructions. When conditions are right, locusts simply begin to swarm.

And the result is pestilence.

27 thoughts on “The Ideology of Pestilence”