This past week, after sixteen years in hiding, the fugitive Bosnian Serb General Ratko Mladic surrendered to the authorities, and has been extradited to the Hague to stand trial at the International Criminal Tribunal for the former Yugoslavia under the aegis of the United Nations.

General Mladic is was the commander of Bosnian Serb forces during the Bosnian civil war in the mid-1990s. His experiences during the war have drawn the interest of prosecutors in Serbia, who hope he can testify about other war crimes — those committed by Bosnian Muslims against Serbs.

The media do not even consider the possibility that the “genocide” in Srebrenica might have been largely manufactured in a propaganda coup by the Bosnian Muslims. General Mladic has already been convicted in the press, and the outcome in the Hague — assuming the defendant survives for the duration of the trial — is predetermined.

The Serbian authorities are hoping for testimony from Gen. Mladic about a particular Bosnian Muslim military leader, Nasir (or Naser) Oric, who is alleged to have committed a series of atrocities during the war. He was previously acquitted by the war crimes tribunal, but Serbian prosecutors believe that Gen. Mladic may be able to supply evidence of additional crimes on the part of Nasir Oric.

The following article provides a glimpse into what Mr. Oric did during the war. It’s from the archives of the Srebrenica Research Group, and was originally published on July 16, 1995 in The Toronto Star: 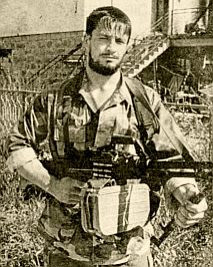 In Mladic’s view, the powerfully built Muslim commander had made life too difficult and too deadly for Serb communities nearby.

Even though the Serbs had Srebrenica surrounded, Oric was still mounting commando raids by night against Serb targets.

Oric, as blood-thirsty a warrior as ever crossed a battlefield, escaped Srebrenica before it fell. Some believe he may be leading the Bosnian Muslim forces in the nearby enclaves of Zepa and Gorazde. Last night these forces seized armored personnel carriers and other weapons from U.N. peacekeepers in order to better protect themselves.

Oric is a fearsome man, and proud of it.

I met him in January, 1994, in his own home in Serb-surrounded Srebrenica.

On a cold and snowy night, I sat in his living room watching a shocking video version of what might have been called Nasir Oric’s Greatest Hits.

Oric grinned throughout, admiring his handiwork.

“We ambushed them,” he said when a number of dead Serbs appeared on the screen.

The next sequence of dead bodies had been done in by explosives: “We launched those guys to the moon,” he boasted.

When footage of a bullet-marked ghost town appeared without any visible bodies, Oric hastened to announce: “We killed 114 Serbs there.”

Later there were celebrations, with singers with wobbly voices chanting his praises.

These video reminiscences, apparently, were from what Muslims regard as Oric’s glory days. That was before most of eastern Bosnia fell and Srebrenica became a “safe zone” with U.N. peacekeepers inside — and Serbs on the outside.

Lately, however, Oric increased his hit-and-run attacks at night. And in Mladic’s view, it was far too successful for a community that was supposed to be suppressed.

The Serbs regard Oric, once Serb President Slobodan Milosevic’s personal bodyguard, as a war criminal.

But they don’t want to send him to the international war crimes tribunal in The Hague, Netherlands. They want to track him down and kill him.

The only songs they want sung of Nasir Oric are funeral dirges.

6 thoughts on “From Our Archives: The Forgotten Story of Nasir Oric’s Greatest Hits”