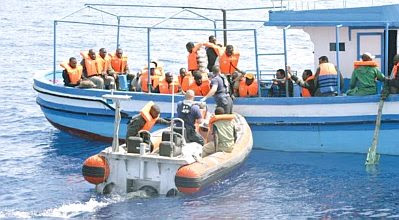 The Mediterranean refugee crisis has become so large that Hollywood starlets are beginning to take notice. I’ll have more to say on this topic later on in the post, but first the latest news on the boat people.

A ship from the Polish navy — which is in the Mediterranean as a part of the NATO air war against Libya — rescued an unspecified of culture enrichers trying to cross over to Spain in a dinghy. The Poles helped them reach their destination:

The Polish navy has rescued a group floating on a dingy in the Mediterranean, who were trying to escape the social upheavals in North Africa, it was reported Friday morning.

The group was transported to shore in Spain and given over to local authorities.

On Thursday evening the German mine-hunter Datteln spotted a group of people floating on a small vessel at a distance of about 80 km from the coast of Spain.

The emigrants were in good condition, but feared that their boat may start to sink at any moment.

The rescue operation was coordinated by the ship Admiral Xawery Czernicki, in the area as part of NATO-led anti-terrorist operations in the region.

Meanwhile the United Nations is once again hectoring the EU over its treatment of the Mediterranean refugees:

The UN High Commissioner for Refugees, Antonio Guterres, has called for “solidarity” within the EU to deal with an influx of migrants to the bloc.

Mr Guterres was speaking on Italy’s island of Lampedusa, where thousands of north African migrants, including many Libyans, have arrived recently.

But he said that “for Europe as a whole it is a drop in the ocean”, saying that many migrants had gone elsewhere.

Mr Guterres’s visit to Lampedusa — a tiny island in the Mediterranean — is to see for himself the crowded conditions faced by the migrants.

More than 40,000 refugees, including a large number of Libyans, have descended on the tiny island, often making the crossing in crowded, unsafe boats.

Some have been escaping the violence in north Africa, whilst many have seen an opportunity to get into the EU.

The next sentence is disingenuous at best:

“When one looks at the situation in Libya, about one million people left Libya after the conflict started and less than 2% came to Europe. So, sometimes the debate in Europe is — in my opinion — a debate that doesn’t correspond to the reality,” Mr Guterres said.

Secondly, the vast majority of the rest are attempting to make their way home to countries further south, or are refugees just across the border from their homeland. Many of those will relocate fairly quickly.

This is hardly the same issue as it is for Europe, which is required to expend large sums maintaining the migrants — probably over €10,000 per enricher just in the early stages of the enrichment process — whereas none of the African countries is doing anything similar.

So the reality is that the current crisis can have devastating economic consequences, particularly for Italy, if it continues indefinitely.

At least Mr. Guterres admits that Lampedusa has a problem on its hands:

He admitted that “for a small island like Lampedusa, to have such a large number of people coming is a huge pressure”.

But he stressed: “I believe that with adequate forms of solidarity this challenge can be overcome.”

Thousands of migrants have been sent to camps on mainland Italy, leading to a political row with other EU countries which fear the migrants may cross their borders.

Now we come to the celebrity angle: Angelina Jolie has taken up the cause of the migrants and is visiting Lampedusa. According to CBS News:

Lampedusa, Italy (AP) — The tiny Italian island of Lampedusa, which has been overwhelmed in recent months by refugees fleeing Tunisia and Libya, is getting some VIP visitors: U.N. envoy Angelina Jolie and the U.N. refugee chief.

Refugee chief Antonio Guterres arrived in Lampedusa on Sunday a few hours ahead of Jolie, who last week traveled to Turkey’s border with Syria to meet some of the thousands of Syrian refugees fleeing the conflict there.

Guterres has thanked Lampedusa residents for welcoming the migrants and urged Europe to continue keeping its doors open.

He says the debate raging in Europe about immigration “doesn’t correspond to the reality” given that the number of migrants who have actually arrived is tiny compared to the numbers who have gone elsewhere.

Finally, for some light relief, not all the migrants arriving in Lampedusa are human:

The Latest Illegal Immigrant to Land in Lampedusa Had Four Legs

A sheep that crossed the sea from Tunisia adds a light twist to the daily human drama of immigrants landing on the Italian island of Lampedusa. But the warmth doesn’t last.

Among the cries of joy and relief from the Tunisian refugees on the dock of this tiny Italian island, a very different voice joined in: a sheep bleating — almost as if to say: “I made it too!”

Authorities had rescued the immigrants, like so many before near Lampedusa, from a 10-meter long fishing boat. The Tunisian vessel was carrying 12 men, six women, a nine-year-old boy… and yes, one sheep. It was white, curly-haired, and an illegal immigrant like all the others. The sheep had been brought along to supply fresh milk for the boy.

The boat arrived in the harbor, with a show of 19 pairs of hands raised in the “V” sign for victory, and a triumphal pair of animal ears. “There is a sheep aboard,” said one of the rescuers by radio to the harbor police station. “What..?” the operator asked. “A sheep,” the policeman replied. It can happen on this island, the crossroads between two continents, the landing place for people who leave North Africa to run away from hunger, and to find a new place for their children to live.

You can read more about the immigrant sheep at the original article.

There’s only one thing I’m wondering: does anybody know whether the sheep was trying to enter Italy as a part of the Spousal Reunion Program?

5 thoughts on “Camp of the Saints: The Sheep Make Landfall”