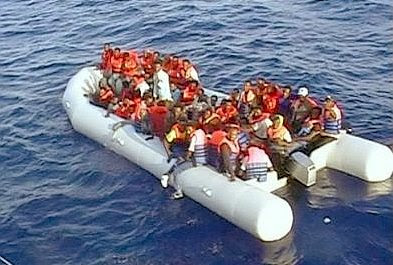 I was away for several days last week, and have been trying to catch up ever since, so the “Camp of the Saints” news has been neglected. However, during that time there has been somewhat of a lull, and not much has happened over the past week or so.

There’s just one story about a new boatload of culture-enrichers. It’s from Expatica, and concerns the rescue by the Spanish navy of 54 migrants:

A total of 54 people sailing from North Africa towards the Spanish coast were rescued at sea early Thursday, Spanish maritime sources said. The group including two pregnant women and two babies were aboard a rubber boat when their boat were seen by a spotter plane and rescued by a Spanish Navy craft 52 nautical miles off the coast of southern Spain, the sources said. Spain is a major entry point for a wave of illegal immigrants fleeing poverty in Africa for the European Union.

Of the enrichers already in Italy, six escaped from a holding facility in Cagliari, on the southern coast of Sardinia, and caused some headaches for the local authorities:

(AGI) Cagliari — Cagliari Airport was closed from 11 pm last night to 6:42 am this morning following instructions by ENAC.

The measure was taken for precautionary reason after 6 Tunisian immigrants escaped from the First Reception Center of Elmas, in the nearby military airport, where they had stayed for almost a month.

Tonight’s final article once again concerns the issue of responsibility for the would-be immigrants who have perished at sea while attempting to cross the Mediterranean to Europe. As discussed in previous posts, NATO vessels — particularly French ones — were accused of deliberately ignoring a stricken vessel and leaving it to drift on the water until most of the passengers died of hunger and thirst.

The Council of Europe, however, has extended its attention beyond that single incident, and is investigating the deaths of many other boat people.

Now, we all know who will ultimately be held responsible….

It can’t be the Libyans or the Tunisians, with their corrupt kleptocracies and despotic governments.

It can’t be the people smugglers, who send their clients across the water in leaky and antiquated boats after demanding an extortionate price.

It can’t be the enrichers themselves, who choose to set sail without resources or visas in an attempt to reach the Land of Milk and Welfare Benefits.

The Council of Europe’s parliamentary assembly on Thursday said it has opened an investigation into the cases of 1,000 migrants who went missing in the Mediterranean while fleeing unrest in North Africa. The Strasbourg-based body said it will issue a report in October to establish responsibility in the deaths of around 1,000 migrants who perished at sea while trying to reach Europe from turmoil-wracked North Africa since January.

“There have been allegations that migrants and refugees died after their calls for help were ignored,” said Dutch lawmaker and parliament member Tineke Strik who is tasked with the inquiry. “Such a grave allegation must be urgently investigated,” she said, adding she will examine how the migrant ships were intercepted by different national coast guards, military vessels and EU border agency Frontex. Last month reports said 61 boat people had died after distress signals had been ignored by armed forces operating in the Mediterranean.

Things have been pretty quiet for a while. But the “Camp of the Saints” doesn’t normally observe any seasonal lulls, nor does it take any vacations. We can expect more enrichment news in the next few days.