Late last night I received this note from an Iranian dissident group in Canada:

The invitation below has been circulated by the regime of Iran and its consulate in Ottawa. We need to organize a large protest against it and write articles and letters to the National Arts Centre president and major newspapers.

Their special event is By RSVP… 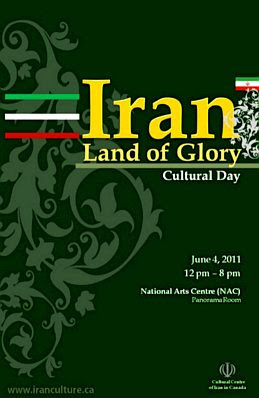 The text of the invitation:


Mr. Hamid Mohammadi, the Cultural Counsellor of the Embassy of Islamic
Republic of Iran to Canada, requests the pleasure of your company to attend
a special program entitled :
Iran, Land of Glory,
a Cultural Day at the National Arts Centre,
Panorama Room, Ottawa, Ontario
This event will take place on Saturday, June 4th, 2011
from 4:00pm to 5:00 p.m.
We look forward to seeing you.

Notice that the RSVP date is TODAY. Readers who are interested in attending this event to learn about Iranian culture are urged to act quickly…