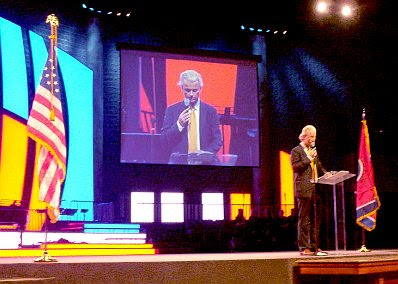 I just returned from an expedition to the area on my map where it says “Heare Be Monsters”. The exotic locale in question was in Extreme Southwest Virginia, although the autochthons refer to it by the quaint name “Tennessee”. Middle Tennessee, to be exact, in the city and suburbs of Nashville.

Geert Wilders was the only monster in evidence, of course — at least “monster” would be the correct term, based on the articles and opinion columns about him in The Tennessean, the local daily. I bought this morning’s print edition of the paper so I could read the report on Geert — more about that tomorrow. As Lou Ann Zelenik, the Executive Director of the Tennessee Freedom Coalition, said last night: “They don’t like us at The Tennessean.”

Fortunately, the citizens of Middle Tennessee do not have to rely exclusively on their newspaper for information about Geert Wilders, since an estimated six to eight thousand of them showed up to hear Mr. Wilders speak, all but filling the Cornerstone Church. It was a magnificent event, the best of its kind that I have ever attended. In addition to Geert and Ms. Zelenik, Sam Solomon and Bill Warner were featured speakers. The talk show host Steve Gill acted as emcee for the event, and Andy Miller, the chairman of TFC, introduced and closed the proceedings.

I’ll have more to say tomorrow about last night’s extravaganza and the two other events I attended earlier. My photos didn’t turn out very well, but I’ll post a couple more of them anyway to accompany my report.

It was a pleasure to mingle with some of my fellow Counterjihad activists. I’ve met several of them previously, including Sam Solomon and Geert Wilders, but I also had the privilege of meeting people whom I had heretofore known only virtually: Mr. and Mrs. Bill Warner, Rabbi Jonathan Hausman, Rebecca Bynum, and Jerry Gordon (the last two being well-known stalwarts at The New English Review).

I’m old and forgetful, so I probably left out other people I should have mentioned. Please send me an email to remind me, and I’ll rectify any omissions.

It was well worth the eight-hour drive to and from Monster Land. Everything went perfectly until I was on my way home on Interstate 40 this morning. I failed to move over to the left lane where a police car was stopped on the right shoulder, and the cop chased me down to give me a very expensive ticket.

Oh, well — it’s cheaper than the auto body repairs and the hospital bill if I had swerved into the path of a semi, right?

Besides, I look at the entire affair the way a Japanese gardener regards his garden: first he lovingly cultivates his flowers and shrubbery, arranges the beds of polished stones, and rakes out the sand until it is perfectly smoothed and furrowed. Then he picks up a large boulder and heaves it willy-nilly into the middle of his creation.

The rationale? It is not given to man to create perfection — that privilege belongs solely to Heaven. The boulder lying haphazardly in an otherwise exquisite garden is a reminder of that fact. It encourages humility in the gardener as well as in the visitors to the garden.

Or, as Wallace Stevens wrote, “The imperfect is our paradise.”

I got home too late to put together a news feed. The usual schedule will resume tomorrow night, God willing and the Creek don’t rise.