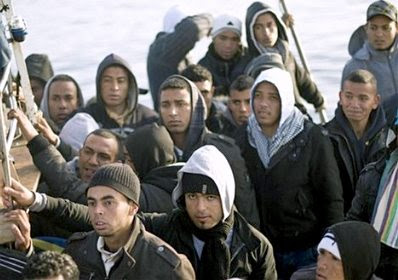 The flood of North African refugees continues to arrive in Lampedusa. Notice that the latest group does not consist of Tunisians:

(AGI) Lampedusa — The first 216 immigrants rescued off the island have arrived in Lampedusa with 40 more arriving in the afternoon. They were all on board two vessels intercepted this morning. The boat escorted by the Financial Police also had six women and a minor on board. the migrants allegedly all come from sub-Saharan Africa and left from Libya.

Earlier this evening I posted a French news report about a battle between Tunisian “youths” and French police. That incident may have been part of a broader front, which included the arrest of 138 Tunisian culture-enrichers in France.

Paris May 4 (Reuters) — French police arrested 138 Tunisian migrants on Wednesday, clearing out an illegal squat in Paris as unease deepened in France over an influx sparked by the upheaval in North Africa.

About 250 riot police were deployed to evict the squatters, most of them Tunisians who entered Europe a couple of months ago via Lampedusa, a tiny Italian island that is one of the closest points for people fleeing North Africa.

“In all, 138 people were arrested, and their situation will be assessed on a case by case basis,” a police officer told Reuters television at the scene of Wednesday’s eviction in the northeast of the French capital.

According to charity groups, 400-500 Tunisians have arrived in France since a popular uprising in Tunisia led to the ouster of the former French colony’s long-time ruler in January, sending a wave of pro-democracy upheaval across the Arab world. [emphasis added]

It’s probably an underestimate, but, for the sake of analysis, we’ll assume that half of the 30,000 migrants who have arrived in Italy since the crisis began are Tunisians. If five hundred Tunisians have wound up in France, 500 ÷ 15,000 = 3.33%, so only one in thirty Tunisians has managed to make it into France. In other words, the Tunisian enrichment problem is still mainly Italian, and not French.

The flow of North African refugees has mainly washed up in Italy and Malta, but Greece has its own enrichment problems which predate the current crisis. The Greek islands have been favored landing places for illegal migrants for years, and many of the invaders now in Greece have crossed the border into Thrace from Turkey.

The Greek prime minister is complaining about the same problem that Italy has: once the culture-enrichers arrive, they cannot be gotten rid of:

Athens, Greece — Greece’s police minister on Thursday called for new detention centers to be built as the country is powerless to expel undocumented migrants seeking to cross into other European countries.

Greece has struggled for years to reach a coherent policy on hundreds of thousands of economic migrants and asylum-seekers from Africa, Asia and the Indian subcontinent who arrive seeking a better future in the West.

Many are kept in overwhelmed detention facilities under squalid conditions repeatedly criticised by rights groups, and eventually find their way to a life of poverty, labour exploitation or petty crime in the cities.

The majority are unable to even return home, and Greece is bound by EU rules to keep them from travelling on to other EU states.

Land and sea patrols by EU border agency Frontex has helped alleviate the pressure but there were still nearly 3,000 undocumented migrant arrests on the Greek-Turkish border in April, up from 2,000 in March, police data shows.

“The situation is dramatic, there’s no doubt about that,” said Papoutsis, who called on local authorities to drop opposition to the new detention camps.

“Local societies are against migrants. They want them out,” he said.

This week, residents of the western Greek port of Igoumenitsa blocked the harbour for hours, calling on the government to remove scores of migrants who have built makeshift camps outside the town.

Riot police moved in when some protesters began throwing stones at some of the migrants who had gathered on the scene.

Immigration concerns have also surfaced in Italy and France with the arrival of thousands of Tunisians after a revolution toppled Tunisia’s dictator in January.

EU authorities this week conceded that controls in the bloc’s border-free Schengen area could be tightened in exceptional circumstances as a bulwark against migration pressure.

You can’t arrest them.

You can’t send them back.

You can’t send them on to Germany, where they really want to go.

To add insult to injury, Pope Benedict XVI thinks that Europeans need to welcome the immigrants with open arms, in the spirit of Christian benevolence.

According to Deutsche Welle:

In his Easter sermon, Pope Bendict VI lamented the violence and conflicts in North Africa and the Middle East and called on Europe to accept more migrants from war-torn countries.

In his traditional Easter message to the world Pope Bendict XVI contrasted the joy of the Easter season with the violence and strife in North Africa and the Middle East and called on Europe to welcome more migrants from war-torn areas like Libya.

“Here, in this world of ours, the Easter hallelujah still contrasts with the cries and laments that arise from so many painful situations: deprivation, hunger, disease, war, violence,” he said in his “urbi et orbi” (to the city and the world) address.

Ha! How many Tunisians and Somalis do you think the pope has living with him in his papal apartments?

There’s no end in sight to all this insanity. What new excesses of cultural enrichment will tomorrow bring?

4 thoughts on “Camp of the Saints: The Rising Flood”