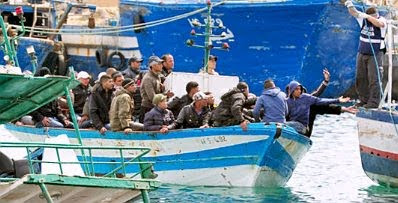 Before getting down to the detailed articles about the Mediterranean refugee crisis, here’s a general statement of principle from the President of the European Commission, who considers it essential that anyone should be able to move anywhere within the Schengen Area:

During a speech in The Hague yesterday, European Commission President Jose Manuel Barroso said that freedom of movement in the EU is a vital part of the European project.

“The right to free mobility is embodiment of the European project — one of the most tangible results of the EU’s efforts and central to both our economy and identity. Free mobility is to Europe what a foundation is for a building. Remove it and the entire structure is undermined. This is why the Commission will not compromise on this principle,” said Barroso, who is prepared to take Denmark to court if the border agreement proves to run contrary to the EU Treaty and Schengen agreement.

This is despite the fact that no country in Europe wants to allow the refugees that are accumulating in Italy to cross over into any neighboring countries. The French in particular are adamant that ils ne passeront pas.

There is a massive amount of hypocrisy in all this Schengen posturing. The French and the Germans will make sure that as few enrichers as possible trickle into their countries.

Despite the best efforts of the French authorities, the following article from The Independent reveals that the “Camp of the Saints” crisis has actually reached Calais, where desperate culture-enrichers hole up between attempts to cross the Channel to the Land of Milk and Social Benefits, a.k.a. Britain:

Unsafe in Libya, Unwanted in Europe: Exiles of the Arab Spring

Hundreds of desperate migrant workers have gathered near Calais

In a derelict industrial complex to the east of Calais they shiver under their sodden blankets dreaming of a Europe that simply doesn’t exist. Seney Alema and his friends are the northernmost vanguard of a human wave that has swept across the continent as Nato’s bombs continue to pummel Libya.

While Europe has applauded the steady toppling of North Africa’s dictators, the continent has been unwelcoming to the thousands of people who have fled the region — the separate states bickering over who should take the responsibility for the refugees’ fates.

When the war against Muammar Gaddafi broke out earlier this year, people like Seney were trapped. European powers scrambled ships to evacuate their own nationals but sub-Saharan migrants, who did the kind of jobs Libyans simply didn’t want to do, were left to fend for themselves.

As law and order broke down the beatings and robberies began. Some were press-ganged into fighting the rebels, others simply disappeared. So thousands are now fleeing across the Mediterranean in barely sea-worthy boats, hoping that somewhere like Britain will give them shelter.

“I didn’t really like my life in Libya but at least it was some kind of life,” explains Seney, a 17-year-old Eritrean with a pencil moustache who had lived in Tripoli for four years. “When the war broke out I fled inhumanity in Libya but I find inhumanity in Europe.”

Despite calls from France and Italy for the EU to “share the burden” of dealing with the migrant tidal wave that has been unleashed by the instability gripping north Africa — specifically Tunisia and Libya — Britain has refused to take in a single “Arab Spring” refugee.

Some East Africans caught up in the tumult are inevitably trying to head to Britain, where there are already sizeable communities of compatriots waiting for them. In the past few days small groups of such exhausted refugees have been arriving in Calais, after making a dangerous journey by boat from north Africa to the European mainland — usually Italy — and then up through the continent.

Their current home is a rubbish-strewn squat on the outskirts of town with broken concrete walls and no running water — euphemistically nicknamed Africa House. Night after night they try to smuggle themselves onto lorries heading towards Britain in a game of cat and mouse that often has fatal consequences.

Last week brought reports that a ship carrying 600 people, mostly Somalians, had sunk off the coast of Libya. The UN estimates that 10 per cent of those making the crossing were drowned.

Now here’s where it gets interesting: check out the officially reported year-to-date numbers of trans-Mediterranean migrants for 2011:

The official figures show that 10,300 people from Libya and 24,000 from Tunisia have landed on Lampedusa so far this year.

In other words: the official total for the Lampedusa crossings (evidently excluding Linosa, Pantelleria, Sicily, Malta, and the Italian mainland) is now 34,300.

Gates of Vienna’s reporting has thus been officially vindicated. As recently as ten days ago, various European media outlets were citing an overall total — for landings at all locations — of 25,000, even though the Italian government figure had been listed as 27,000 since early April. Less than a week ago the official Italian estimate was revised upward to 30,000, which still seemed too low to me. I had been tracking the new landings, and put the figure at close to 35,000.

So you read it here first.

However, the landings since last week would seem to have nudged it above 35,000, and that seems to be borne out by the following article:

One in ten migrants fleeing the unrest in Libya dies. They often make the journey in old and overloaded boats.

So far, UNHCR says over 12,300 migrants have arrived in Italy and Malta from Libya over the past two months.

The previous article listed 10,000 immigrants from Libya (although it did not include the other Italian ports or Malta in its total). Thus the additional 2,300 Libyan culture-enrichers would send the overall total up to 36,300.

A little over a week ago, 1,400 people drowned at sea trying to escape the unrest in Libya.

But the dangers are not enough to deter others making this perilous journey.

Here’s another story about the dangers of the crossing, this time coming from the Greek islands. The migrants in this case are from South Asia, and probably traveled overland through Asia Minor before embarking from the coast of Turkey:

Tragedy With Immigrants Off Preveza — One Child Dead, One Missing

A man and an eight year old boy were recovered dead from the sea are of Nicopolis bay in Preveza, West Greece. Another boy, allegedly the twin brother of the dead has been missing. The Coast Guard had rushed to the area after being informed about an overturned boat. Twenty two people were rescued so far. The boat was carrying illegal immigrants and was sailing towards Italy.

The immigrants were rescued and transferred to the old town hall of a nearby city.

The owner of the boat and captain of the horror trip was a 52-year-old Preveza resident, who was arrested by the police.

The incident happened in the early morning hours of Wednesday.

According to some Greek media, the immigrants had paid 5,000 euro per person in order to reach Italy. The immigrants were from Afghanistan and Pakistan.

Finally, we have an eerie echo of one of the recurring themes of Jean Raspail’s novel The Camp of the Saints — in order to prove to themselves that they are not “racists”, Europeans feel compelled to rescue all the unfortunate souls who endanger themselves trying to reach Europe:

(ANSA) — Lampedusa, May 18 — Italy’s top bishop visited Lampedusa Wednesday and praised the Sicilian island’s inhabitants for how they had coped with an unprecedented influx of migrants from North Africa.

“Let Italy and Europe not forget Lampedusa,” Cardinal Angelo Bagnasco said after touching down on this stepping stone between Africa and Europe.

“In the first stage of the (migrant) assault,” he said, “the community risked being depicted as racist but then it showed generosity, reaching a peak in the latest shipwreck, a few days ago, which could have been a tragedy but was not because people didn’t hesitate to dive into the sea to rescue (migrants)”.

Lampedusa was flooded with about 25,000 migrants from Tunisia in the first months of the year, followed recently by thousands of boat people suspected to have been sent deliberately by the Gaddafi regime in war-torn Libya in unseaworthy vessels which have risked foundering.

Three people drowned in the latest shipwreck but over 500 were saved.

The rules require that Europeans protect, house, feed, and clothe everyone that attempts to get to their shores, no matter how expensive and destructive their presence in such numbers becomes.

As I have often said, this is evidence of mass insanity.

2 thoughts on “Camp of the Saints: The Numbers Game Redux”