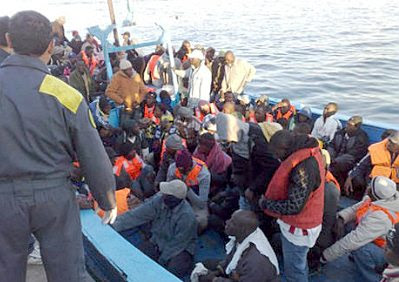 Three days of Mediterranean refugee stories have accumulated since the last time I did one of these posts. Today’s news item is the most interesting, for two reasons: rather than Lampedusa, the culture-enrichers arrived near Ragusa on the southeastern coast of Sicily, and all of the migrants plus their smugglers are Egyptian:

(AGI) Ragusa — 3 alleged smugglers have been arrested for a crime associated with the illegal arrival of 46 Egyptians yesterday. Police agents of the Ragusa-based Flying Squad Unit, the GdF agents based in Pozzallo and the Carabinieri of the Modica Company arrested Daouet Rachid Ali Mhammed, Muhammar Ahmed, and 25-year old Ateya Abu Zed, all Egyptian nationals.

They are accused of criminal conspiracy aimed at abetting illegal immigration.

The article doesn’t say whether the immigrants arrived directly from Egypt. A few weeks ago there were still thousands of Egyptian refugees in the Tunisian camps, so it’s possible that they set out from Tunisia.

Now for the “routine” arrivals, the humdrum daily roster of overloaded boats and drowned migrants from the waters off Lampedusa.

A large number of sub-Saharan African refugees arrived two days ago in Lampedusa:

(ANSAmed) — Palermo, May 20 — A barge carrying some 70 migrants, many of whom were minors, was intercepted off the coast of Sicily by local police. The “old wreck”, an old 15 metre fishing boat which was probably Egyptian, became stranded near the beach, enabling several passengers to swim to the shore and disappear. Up until now, 46 have been tracked down and taken to Pozzallo. Many of these were minors, aged 10-15. The remaining fugitives are being searched for. Another landing yesterday on the coast of Torretta Granitola, in the province of Trapani, ended tragically. Two smugglers ordered the passengers to jump 100 metres away from the shore; it was the middle of the night, the waves were high, the water freezing, and it was pitch black. Yet they were told to jump in and swim, that the shore was just a few strokes away. Seventeen Tunisians jumped. Three died less than 20 metres from shore. The survivors claim they come from Libya. Clearly, departures from Tunisia have begun again, with small vessels which escape the local army’s notice, and from Libya with old fishing boats whose value on the human trafficking market is much higher.

A vessel carrying 208 people reached Lampedusa the previous night, including 23 women and 3 children. Then another barge brimming with people was spotted some 20 miles to the southeast.

The local police rescued the passengers, who were then taken to the island. There were 500 of them, of whom 38 were women and 9 were children from several countries. Many of the passengers were African, but some were Asian, having left Libya on Tuesday after waiting for weeks. The echo of another barge sounded from Malta, a vessel carrying 320 people, also from Libya, having been rescued by the Maltese marine.

Notice that the boats are sailing from Tunisia once again, despite the agreement between Italy and Tunisia — which was hailed last week as “working” — and despite the fancy new coast guard vessels provided to Tunisia by the Italians.

This is an earlier article about the party of 208 that was reported above:

(AGI) Lampedusa — During the night, a Libyan boat with 208 migrants landed at Lampedusa, reaching the harbor at about 1:00 AM. Among the migrants, tentatively identified as sub-Saharan natives, there are 23 women and 3 children. Their arrival, after a few days of truce, coincides with a break in the weather. Coast Guard and Guardia di Finanza continue to patrol the Sicilian channel by air and by sea.

And the next story seems to feature the same 500-strong contingent that arrived from Libya, so it won’t affect the overall total, either:

(AGI) Agrigento — A boat carrying between 400 and 500 migrants was sighted this morning by a GdF helicopter 25 miles from Lampedusa. It was and reached this afternoon by six patrol boats and rescued. The boat was stricken and the passengers were transshipped in groups on Italian vessels, 3 of the Guardia di Finanza (GdF) and 3 of the Coast Guard. The first called in the port of Lampedusa at 4 pm. The immigrants all originate from Sub-Saharan African Countries and sailed from Libya.

As far as I can tell, the 300 arrivals covered in this report are not mentioned in the previous articles:

(AGI) Lampedusa — The vessel sighted at about 10.30 this morning by a Coast Guard helicopter, about 15 miles west of Lampedusa, is expected to dock by 4 p.m. Sources have reported that there are about 300 migrants on board, probably of sub-Saharan origin coming from Libya. This will be the second arrival today following the 208 immigrants, including 23 women and 3 children, who arrived in the night.

A report on the 300 that were rescued and taken to Malta, from The Maltese Times:

‘Many More’ Migrants to be Expected

Malta should expect many more migrants this year and possibly even in next year, Frontex said yesterday.

The EU’s border control agency has just carried out an in-depth analysis into the latest migration trends and developments on the economic and geopolitical front.

The report was released a few hours before a boat bearing more than 300 immigrants reached Malta last night.

As the ongoing crisis in North Africa, particularly in Libya, continues to unfold, the analysis shows that many involved in the conflict, including hundreds of thousands of sub-Saharan Afri­cans and even Libyans, would probably try to cross over to the EU in order to find new pastures.

The improving economic situation in the EU, with demand for labour increasing, is expected to act as a pull-factor.

However, as Libyan conflict started, the joint-patrol agreement between Italy and Libya fell by the wayside and the Libyan coastline is now almost a “free for all”.

That was the last of the articles that mentioned numbers of new culture-enrichers. It’s difficult to determine what the new running total should be, since it has never been clear whether the earlier totals included arrivals in Malta.

For the sake of simplicity, we’ll assume that the earlier year-to-date number of 35,000 to 37,000 was for arrivals on Italian territory only. We just added a little more than a thousand to that total, making the current baseline 36,000 to 38,000 since the Arab uprisings began in January.

The Italian foreign minister is still being a broken record about the inability of the European Union to deal with the refugee crisis in any meaningful way:

(AGI) Paris — Frattini said the EU’s effort to tackle the immigration emergency has so far been “weak and ineffective”.

On a different note, it’s worth remembering that not all of the displaced persons are fleeing northwards. During a civil war, refugees tend to flee in any direction, and some of the flow out of Libya is going south. In particular, some of the migrant workers who originally came from further south are attempting to return the way they came.

Benghazi, Libya — Thousands of migrant workers who fled fighting in Libya are stranded in a remote desert town in northern Chad, in what an international aid group warned Friday could become a humanitarian catastrophe.

More than 3,800 Chadians are stuck in Zouarke, a small town in Chad’s arid mountainous region near the border with Niger, after traveling for days through the extreme heat of the Sahara desert, the International Organization for Migration said. The migrants are said to include 310 women and children. Dozens are sick or injured, and at least four people have died after drinking water from contaminated wells.

“The situation in Zouarke could become a catastrophe,” IOM spokesman Jean-Philippe Chauzy told reporters in Geneva.

The Africans, who were working in Libya when the revolt against ruler Moammar Gadhafi erupted, had to endure a tortuous road journey via Niger, crammed onto overloaded trucks, hungry, thirsty, some injured. Two children are believed to have died from suffocation, and at least four people have died from contaminated water, the IOM said.

They are the latest among hundreds, probably thousands, who have died in desperate attempts to get away from the fighting — and escape charges that they were fighting for Gadhafi as foreign mercenaries.

Many of the 2.5 million foreign workers in Libya, including 1 million Egyptians, fled by air, road and sea in the first weeks after the Feb. 17 uprising against Gadhafi’s four-decade rule.

Soon flights were canceled, and then a no-fly zone imposed by the United Nations to prevent Gadhafi’s forces from bombing civilians halted the airlifts.

More than 10,000 who took to the seas in overcrowded vessels have arrived on islands off Italy, telling horror stories of hundreds who died along the way. Some said they were forced to board non-seaworthy vessels at gunpoint by Gadhafi’s soldiers.

Chad shares a border with Libya, but land mines along the Aouzou strip, left over from a war in the 1970s, make it too dangerous to cross there. Instead, the migrants searching for safety are forced to travel a roundabout route through neighboring Niger.

Even though the “Camp of the Saints” crisis in southern Europe is unprecedented in severity, almost twenty times as many migrants in the Libyan exodus have ended up in other African countries.

Conditions there are undoubtedly far worse than in the Italian camps, so one may expect that many of the refugees are even now planning a getaway across the Med, if they can possibly manage it.

One thought on “Camp of the Saints: Fleeing in All Directions”