Nicolai Sennels returns with a guest-essay about the looming water crisis in the Middle East, and a modest proposal for how it might be used to the West’s advantage. 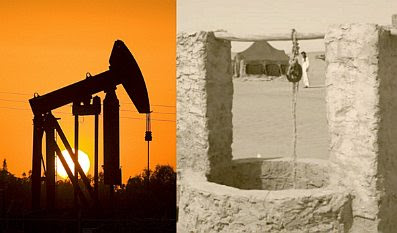 Arab drought: An “Oil for water” policy is an option

Soon our tankers may not travel empty on their way south, but be filled with water. Soon the West may be able to sell the Arabs water at the same price as we buy their oil.

Maplesoft Water Stress Index calculates “the ratio of domestic, industrial and agricultural water consumption, against renewable supplies of water from precipitation, rivers and groundwater.” The index pinpoints Middle Eastern and North African countries as the ten countries with the world’s greatest water stress:

Overpopulation, a Western-inspired life style, growing industry, climate changes, and a generally dry climate have made lack of water a deadly serious problem in the Middle East and North Africa. Water is needed for industry, food production, and of course for drinking. The water crisis is thus likely to cause a hunger crisis and an economic crisis, and is likely to spark violent conflicts over water resources and land for grazing and farming, which may lead to large streams of refugees heading towards the West.

Hopefully the risk of thirst, hunger and conflicts in these parts of the world will help increase awareness of overpopulation in the affected areas — both among Muslim and Western politicians and organisations. Meanwhile, Western countries should examine the political and economical possibilities that the lack of water in the oil-rich Muslim countries brings forth.