Who killed the “spirit of inquiry” in Islam?

That’s the subtitle of a book review (behind a firewall for the moment) regarding the fateful decision by Islamic scholars to make intellectual curiosity among the faithful sure grounds for blasphemy, shunning and death.

The crucial decision to turn away from new information (or even old, Platonic philosophical information) was the force which drove Islam into the corner to sit with a dunce cap on its head. The book, The Closing of the Muslim Mind: How Intellectual Suicide Created the Modern Islamist Crisis gives you the history of this foreclosure (as Freud would’ve called it). Slouched there even now, fingers in his ears, the fiercely irrational believer maintains that reason has no place in reasoning, and there is no cause and effect. In other words, it’s whatever the current dunce claims that “Allah Sez”…even if Allah’s slave is hiding in a well and waiting for the right moment to End It Fer Everybody.

In the Product Review on the Amazon page (linked above), they have this handy summary:

The Closing of the Muslim Mind solves such puzzles as:

As the reviewer, David Aikman notes:

but what use is reason in the face of the Iranian education ministry official who claims that the Tom and Jerry cartoons were concocted in the United States to improve the image of mice because, during the 1930s in Europe, Jews were called “dirty mice”?

What use reason indeed? Back in the 90s when I learned Iran didn’t let the printing press into the country until the mid 19th century – and Persians are supposed to be the smart ones – I knew they had a problem. Islam deliberately removes the faculty of reason. No surgery necessary, just endless indoctrination: loud, incessant, and beginning when children are young and malleable. Why develop something that won’t ever be used?

The Closing of the Muslim Mind, or rather the review of the book, focuses on the decision that it would be “dangerous” to permit free inquiry. Indeed. Not only did science die at the hands of Islam but it also obliterated historical inquiry, literature, the arts, and music – all the beautiful furnishings of the human mind – and replaced them with submission to life in its nasty, brutish and short form.

Why would there be any inquiry beyond requisite bathroom rituals when rational endeavor is forbidden?

Stumbling onto that review reminded me that I’ve woefully neglected an important book review of my own, one I’ve been waiting to “feel better” enough to write an in-depth essay. Well, t’ hell wid it…I ain’t never gonna feel well enough to do that so you get my scrambled version instead. I hope it’s enough to entice you to buy the book.

Our advisor has mentioned many times the need for Counterjihad fiction. She says contrarian artists need to invade all the arts and present the minority point of view so that the public can judge for itself. This is a challenging idea, but then her strategies usually are. It’s also difficult to create good art when you have an explicit agenda. Sometimes it works, but usually after the fact – e.g., excellent World War II fiction couldn’t rise to the top until we’d had enough time to create an aesthetic distance.

In this war, we don’t have the luxury of waiting. We must go with the literature we have now, the fictional works being created out of an author’s need to share a grim and overwhelming reality. In that spirit, I present a “thriller” (the author’s classification, though “terrorist thriller” is closer to the mark). 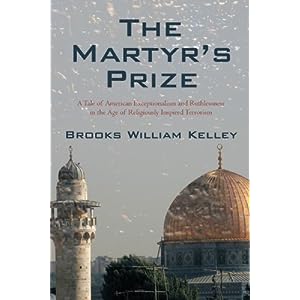 What’s the au courant expression for a book you enjoyed? “It’s a good read”? (Before you send me an email about this usage, I already agree. Using verbs as nouns is gauche, but people persist if it works). The Martyr’s Prize is definitely in the “good read” class; the author was right when he said in his cover letter that one ought to read at least a couple of chapters. He promises the reader they’ll be hooked if they do. Yes, indeedy.

Brooks William Kelley has written a page-turner. For a first effort, and self-published, it’s exceptionally well done. He’s made believable characters you’ll care about, and he builds the plot like he’s been churning them out for years. Do the gears grind in places? Sure. But this is not (yet) a polished professional author; this is an ardent storyteller, and he will improve with experience. Since he was smart enough to leave sufficient numbers of unresolved plot lines to make you want to find out what happens next, there should be sequels. There’d better be!

The Amazon page reviews are good, almost all of them five star. There is one fellow, a two star loner, who complains about “the overuse of vulgarity” and guesses (wrongly) that therefore the author is young. Well, knock me over with a feather cuz I never even noticed this language quirk. Living in cyberspace as much as I do, perhaps I’m inured. However, I agree with the fellow that Kelley has talent and will improve with time.

The dissenter calls the novel “rambling”…another criticism that passed right by. Kelley’s pacing is tight, given the issues he has to cover. Here’s a bit of outline from another Amazon reader:

Start with raw, believable and well-defined characters, both protagonist and antagonist. Layer the story with current events, genuine techno-babble, actual Quranic verses, and sprinkle a few factual news pieces gleaned from today’s actual headlines that perfectly mirror the storyline, and you have an all consuming adventure that a mere 380 pages is unsuccessful at satiating the pallet.

The locales are strikingly accurate (for anyone who’d ever been to them) to the point one can actually feel what the character feels. Your imagination will soar as you are drawn directly into the mind or geographic location of the scene painted so specifically by Kelley that you feel a part of the story as it unfolds….

Since I’m a technophobe, I can’t tell you whether those details are accurate but they sure are compelling. Not the geeky stuff at the beginning so much (though those details are crucial as plot devices). No, what glued me to the page was the rigging of a flat panel TV so that it would…well, you’ll have to read the book and sweat that part of the plot with the rest of us.

Amusingly, sprinkled in with the other bits o’ reality is a covert description of Robert Spencer playing himself but called, if I remember correctly, Dr. Pennington. RS appears briefly in one incomplete scene as the speaker invited to a college campus to give his lecture on Islam. For a brief moment, there he is, “rotund” and knowledgeable about his subject – and under attack by the usual suspects. It takes a certain amount of physical courage to do that and Mr. Spencer has proved he has this quality.

The fleeting de rigueur sex scenes will be a disappointment to those who want more, but they’ll also be a disappointment for those who’d have liked to see a female character taking her time before jumping in the sack. I realize mores have changed, but sometimes I hear rumblings from the younger generation that they’re changing back. At any rate the “love interest” remains as a hanging chad to be further resolved in book two. When you read it, ask yourself if the woman doesn’t remind you a bit of Ann Barnhardt.

And one so fervently hopes there will be a book two. I like Mr. Kelley’s characters, even the villains. Well, for the latter, they’re easy to ‘like’ because you know they’re going to exit stage left in a big bang. But the heroic ones remain with you after you read the last page. You wonder how Mr. Kelley will develop all those embryo plots you can see in the far distance…

The Baron never has time to read anything. If he has occasion to travel again, I’d like him to wrap this one is a plain brown cover (can’t be too careful with the TSA) and take it on his next wearisome plane ride. Two or three chapters in, he’ll be hooked…

13 thoughts on “What If All They Get Is Some Lousy Raisins?”