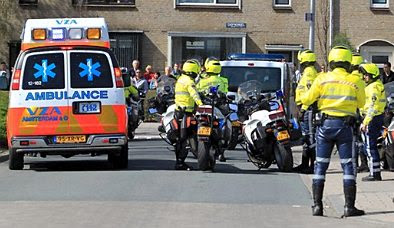 Last Saturday a deranged gunman killed six people at a shopping mall in the Netherlands, and then committed suicide. For more detail on the story, see this article from The Daily Mail.

When Dymphna first saw the news article, it made her wonder if the shooter — a native Dutchman — could perhaps have been a convert to Islam, like the young man who recently shot up a school in Rio de Janeiro.

She wasn’t the only one thinking along those lines. Our Dutch correspondent H. Numan just sent this essay on the reactions of the Dutch political culture to the shooting in Alphen aan de Rijn:

Wilders did it!
By H. Numan

Yes, he seems to be guilty of everything.

Global warming? Wilders did it!

The worldwide terror campaigns of muslims? All because of Wilders!

Even banning religious torture of animals is a big mistake, because Wilders is behind it all.

The latest addition of the Dutch gutter press? The shooter in Alphen aan de Rijn possible may have voted on the PVV. So Wilders is again behind it. Who would have guessed it…?

Actually I did, I was already waiting for it to emerge. Together with calls for tighter gun control.

It is impossible to know for which party someone voted. The last time I checked, that would have been electoral fraud. Someone may tell you: “I vote for so-and-so”, but that isn’t to say that it’s true. That person may very well have voted on a different party or person.

We don’t know, because voting is supposed to take place in secret. But that doesn’t stop the press from slandering Wilders and the PVV. I’ve no idea if there is anything that would.

I repeat: nobody can possibly know for which party somebody voted, unless that person declares this in court and under oath only.

I wrote Dutch “gutter press”, with good reason. There isn’t any real convincing evidence for this. It is an unconfirmed news item posted on Joop.nl supposedly coming from the NRC Handelsblad (nicknamed NSB Handelsblatt as they are virulently politically correct left wing nowadays).

Joop.nl is one of the most vocal anti-Wilders sites, and not known for its objective news. According to the item, the shooter was “very much anti-foreigner” and “somebody” heard him saying he hated all foreigners. On the NRC site itself I couldn’t find the article. Either it has already been removed or it wasn’t there in the first place. I assume the first, as this is almost standard procedure for left wing newspapers to slander Wilders. You publish some unfounded far-fetched accusations that would land you in hot water (if they concerned somebody else than Wilders), only to remove the article as soon as forums pick it up.

The rumor has done its job now that it can be tagged to Wilders.

You can’t buy a firearm just like that. First you have to join a shooting club. With a clean police record. Then you have to be member of that club for at least 18 months. In that period you have to shoot regularly, this is registered. Not enough turns on the range means no application form for a firearm. Then you have to apply to the police with that form. With, again, proof of no criminal record. You can’t carry the weapon loaded to or from the range. You cannot keep the weapon ready for use at home. It must be kept in a safe place (such as a vault), in at least two separate parts, So the weapon cannot be used even if a burglar were to find one part. Not shooting regularly would revoke your license. Only weapons for sporting purposes can be used. A Barret .50 caliber sniper rifle is not a sporting weapon. Neither is a Derringer. And more, and much more.

You cannot buy an airgun. Anything that would be able to pop a balloon must be sold with the above license. High-powered airguns are therefore strictly regulated in The Netherlands.

The police cannot really be blamed here, as they would require whole police units of crystal balls or dowsers to prevent nut cases acquiring a license. What I do blame the police for is that they have created an immense amount of paperwork which they themselves would rather not check, and certainly not on a regular basis.

A person with a slightly bad record in one city is able to obtain a license by simply joining a club in a different police area. Dutch police regions do not function in an integrated fashion; this trick does work. I know this has happened in the past.

There is a call to have all firearms stored at the club. That wouldn’t work, because it would make those clubs prime targets for serious criminals and terrorists.

Nearly all those clubs are, by nature, located in less densely populated areas. Makes sense: you don’t really want a shooting club in the middle of town. But that means that all those clubs can easily be observed and burgled. As you would have several hundred firearms, perhaps several thousand, nearly all of them in mint condition, that would be a terrorist’s dream. To prevent that, the law would no doubt demand proper security. That means most clubs would have to close down, because very few can afford the security of Fort Knox. Making the few remaining clubs even better targets…

Now to get back to the mass murderer in Alphen: there is something that very quietly disappeared from the news. The farewell letter with religious texts.

The news first mentioned that religious texts were in his farewell letter. Later they tuned it out as irrelevant, and now it has completely faded away. This, however, is very relevant news. Why? How many religions do you know that approve of suicide? Not that many. Actually, I only know one that does…

But we really don’t want that out in public, do we? As you all know, it takes usually forever for the media to inform about the ethnicity of a criminal. Two weeks ago a ‘inhabitant of Amsterdam’ drove at high speed under the influence (possibly/likely, this was clearly insinuated) and killed a 26-year-old woman riding a bicycle. The body was smashed into a lamppost many meters away, and several meters high. The driver fled the scene of the crime and was later arrested. In the middle of the night. He denied guilt. Not a word about ethnicity. Until the news somewhat faded away. Then it became ‘someone of South Mediterranean origin’. This is the politically correct euphemism for Moroccan.

Of course it is a giveaway: not that many people race around in the middle of Amsterdam at night, flee the scene of the crime and deny any involvement. When that happens, we usually think: eh, someone from Finland, no doubt.

Now, the ethnicity of the Alphen killer was released immediately. With his full name and unmasked photo. That is normally not allowed. Remember that even a badly made robot photo of an Amsterdam serial rapist was released only with the eyes blacked out. ‘As to protect his identity and reputation.’ Not in this sort of case, where we have to enforce the peaceful image of Mohammedanism.

Though I cannot prove a thing, I do think it is not unrealistic to assume this character may very well have written a letter informing us he had joined the jihad and wanted a virgin of 72 or 72 grapes in paradise. It certainly is a possibility. One doesn’t have to be a card-carrying member of the Al Quackies to go jihad.

However, it is so much easier to blame it on Wilders.