The Dutch television network VARA, founded in 1925 as Vereeniging van Arbeiders Radio Amateurs (Association of Workers’ Radio Amateurs), is an unabashedly socialist outfit, part of the Nederlandse Publieke Omroep (NPO, Netherlands Public Broadcasting), the taxpayer-funded state broadcasting system. One of the most popular evening features on VARA is the left-wing “Pauw & Witteman”, a news/discussion program.

Our Dutch correspondent H. Numan reported on Saturday about the extraordinary events that occurred on Friday night’s edition of Pauw & Witteman. Bertus Hendriks was one of the witnesses in the Geert Wilders trial, and while on the stand that afternoon he had contradicted another witness, Prof. Hans Jansen. During the discussion in the VARA studio, Mr. Wilders’ lawyer Bram Moszkowicz called in to the program and asked to have a word about what Mr. Hendriks had just said. Mr. Moszkowicz’s exchange with the presenters caused a sensation in the Dutch media. 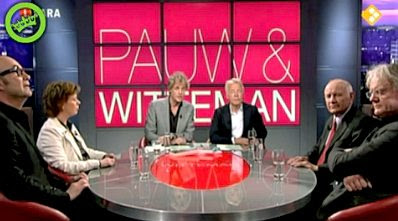 Late last night H. Numan and I exchanged several emails about the whole affair. Something about the scenario on Pauw & Witteman didn’t sit right with our Dutch correspondent, and he had this to say about it.

That “spontaneous” phone call from Mr. Moszkowicz was too good to be true.

Watch that clip carefully. And observe: Mr. Jeroen Pauw announces that Mr. Bram Moszkowicz has called ‘unexpectedly’. Possibly. The presenter handles this without interruption. Commendable. Nobody is surprised. No one finds this strange. Yet this is the first time a lawyer in the middle of a trial has ever called directly into a live TV show. Not even Hendriks bats an eyelid. 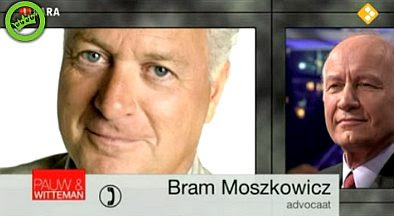 When Mr. Moszkowicz begins and more or less reiterates that Bertus Hendriks was accused of perjury, Hendriks remains unperturbed, even amused. This is a man who has nerves of steel. Suddenly, completely unexpectedly, you call your tormentor. In the middle of the show, when you never expected it — or so it would seem. And you don’t just keep a straight face; you can even laugh.

At 2 minutes 30 seconds, the trap is laid. Witteman asks about the interview in which Prof. Jansen makes a statement. The clip is then shown, about thirty seconds later. The clip takes about 28 seconds. Only the one relevant excerpt is shown. Nothing more, nothing less.

The presenter asks Mr. Bram what his opinion is about the clip being shown at that moment. He refers to what Hans Jansen said, and asks “Isn’t that perjury too?”

This was too smooth and too good to be spontaneous.

It cannot be done in a live TV program. It takes time to answer the perfect question, but it takes far more time to find the right interview and show only the relevant part. You cannot do that in mere seconds. Not without some minor mistakes, glitches, things you do because you have to hurry getting it on the air.

This is far too smooth. It seems to me it wasn’t really “live” after all, but well prepared beforehand.

What do you think, or am I getting paranoid?

I told H. Numan that he was probably right. “But why would Pauw and Witteman help Moszkowicz out? What’s in it for them?”

I don’t know. That is why I find it so strange. They have nothing to gain and a lot to lose. It might be an orchestrated effort to make the process become impossible.

The real intent was to cut Wilders off at the knees. That was the whole idea. But Wilders turned it around, with the help of his lawyer. Now “three pairs of legs”, as Geen Stijl calls them, the previous three judges, have been replaced. Another set of three pairs of legs barely made it out alive Monday afternoon.

It is almost inevitable that sooner or later they will be replaced by set number three. One magistrate is permanently damaged: Mr. Tom Schalken will in all likelihood resign his professorate and court position once this charade is over and he can quietly disappear.

How many more powerful men are waiting to be eaten by the Great White Shark? Not that many, I assume.

The idea of killing Wilders politically failed. Now the powers that be are mounting a damage control action. That is the best I can think of.

I said, “Maybe that’s it — maybe they wanted to help Schalken gently off the public stage without actually dragging him away. He had perhaps become a liability…?”

He certainly has, hasn’t he? He could have been a hero if it had worked. But since it hasn’t…

Look at Napoleon at Borodino. His idea was to follow up and destroy the Russian army. Had that happened, it would have been the masterstroke that destroyed the entire army. But it didn’t work out that way. Now everybody knows Napoleon was a dimwit simply trying to do the impossible.

Bodissey: “And what about Hendriks? Are they doing the same thing to him?”

I have no idea. But both Schalken and Hendriks are nothing but small change. You reward them when appropriate and get rid of them when worn out. Seems to me both are worn out now.

Later on, after I went to bed, he dug deeper into the matter and wrote back with his analysis of what actually happened.

The real story had nothing to do with Hendriks, but with Mr. Wilders’ resourceful lawyer, who had been so devastating to the prosecution’s case up until that point:

It was a set-up. Prearranged to lure Moszkowicz in a trap.

Obviously the public does not know that we are watching a trap. But Pauw and Witteman do. They are indeed themselves part of that trap. The direct attack is the question about whether Jansen’s statement did not also constitute perjury. You can then hear that Moszkowicz has some difficulty finding a good answer.

Witteman repeats the question, but with slightly different words. Instead of repeating the question exactly, he paraphrases the words. The interview was intended to make Jansen say something. The trick is linguistic: Mr. Jansen did you feel threatened or intimidated? “No, I didn’t feel intimidated” 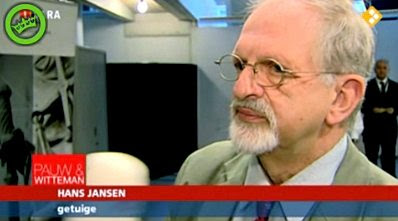 When they broadcast it, the glossed that over; nobody really recalls the exact wording anyway. So it became: Mr. Jansen have you been intimidated? That makes his answer (to the “feel” question) very different.

So I was right, it was a set-up. But it backfired.

Moszkowicz wasn’t ready for this, and he got into a bit of trouble. However, he knows how to pull off a proper save, and turned it around — but that’s because he’s tops in his field.

The whole thing was too good to be true. You cannot possibly prepare a clip like this within thirty seconds of broadcast time.

There was a very conscious decision to manipulate. The reactions of the presenters were too perfect. There were no gaps. Nobody showed the least surprise. This was a very nice trap — only it never snapped shut. The victim managed to save himself.

For a more detailed account of these events, see H. Numan’s piece at Het Vrije Volk (in Dutch).