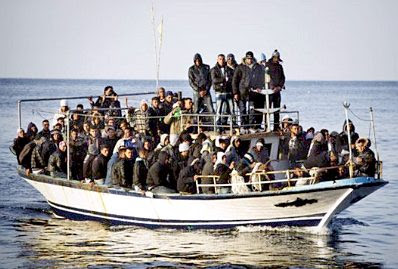 As pointed out in my previous post in this series, Italy is permitted by its agreement with Tunisia to repatriate up to sixty “migrants” a day. Let’s take a look at some recent numbers and see how all this is working out.

178 Left Libya and Land at Lampedusa

(AGI) Palermo — A boat with 178 migrants from the sub-Saharan region was escorted by a GdF patrol boat into Lampedusa harbor.

The migrant group, reached offshore during the night, included nine women and two minors. This is the second landing at Lampedusa within few hours. Last evening, 77 Tunisians arrived from Sfax, after a 10-day stretch without illegal arrivals.

(AGI) Palermo — Another large vessel carrying about 300 immigrants has been rescued about 40 miles south of Lampedusa, where 178 refugees had arrived from Libya. There are about 300 people on the boat now assisted by Italian Coast Guard patrol boats. The exact number will only be known when the boat docks in the island’s harbour .

(AGI) Palermo — Another two barges brimming with immigrants reached Lampedusa last night and this morning. Almost 2,000 foreigners have landed on the island in the last 24 hours. One of the two vessels, which was carrying 360 people, reached Isola dei Conigli beach, while the other, carrying 500 passengers, was rescued about a dozen miles off the coast. Both the barges came from Libya.

Thus, assuming the Italian government managed to repatriate the maximum number allowed during the same time period, we would have 1338 – (2 X 60) = 1218, or a net gain of more than 600 culture-enrichers per day. If the same rate were to continue for another six months, Italy would gain an additional 55,000 or so foreign (mostly Muslim) residents.

France and Germany will not allow Italy to ship any of this excess to other states in the Schengen area. EU human rights laws prevent the Italians from imprisoning illegal immigrants. EU laws also forbid Italy from declining to support the refugees, who must be fed, clothed, housed, and provided with other amenities at the expense of the state.

This is most assuredly an invasion.

The Italians are attempting to alleviate the load on the ports of arrival by distributing thousands of residents of the temporary camps to more permanent facilities in other parts of the country. According to AGI:

Italy: 2,500 Refugees to be Distributed Regionally From Monday

(AGI) Rome- From Monday about 2,500 CARA (Asylum Seeker Reception Centre) residents will be transferred equally among the regions. Franco Gabrielli, delegate commissioner for the humanitarian emergency, communicated the details of the Civil Protection plan to all the regions. Abruzzo is excluded from this.

Interestingly enough, France has begun the process of deporting Tunisians who have managed to get through its cordon at the Italian border. Some of them are even being deported to Italy, as their proximate point of departure. There’s no word whether the French are laboring under a daily limit on the number of allowed deportations.

“Tunisians have started being sent back to their home country,” the Interior Ministry’s press office said on Friday. “Others have been sent back to Italy in conformity with an agreement reached with Italy. We don’t have any figures to provide.”

French police have conducted round-ups of Tunisians the past three nights in Paris and Marseille where they have congregated. At a park on the edge of Paris where about 400 Tunisians were camped out, police showed up after dark last night to conduct identity checks. They filled five vans with young men, but wouldn’t speak to reporters on the scene.

Notice that France is acting ahead of any changes to the Schengen Agreement, or other authorization from Brussels. This is normal behavior for the French and the Germans, who are the dominant states of the EU, and thus may ignore the rules when they deem it in their national interest.

Presumably Silvio Berlusconi made his recent deal with Nicolas Sarkozy in hopes of gaining access to a trickle-down application of the new rules to Italy. It will be interesting to see if the Italians become more aggressive and less fastidious in their own border enforcement.

The Maltese, however, are unhappy with Italian policy even in its current state. According to ANSAmed:

Talking during a conference in Valletta on “the Libyan migration crisis”, Bonnici used harsh words against italy’s choice, saying that “the decision is not at all in Italy’s national interest”.

But what is Mr. Bonnici worried about? Is Malta a more attractive destination than Italy, so that the free-roaming migrants are likely to move there?

Malta is a tiny country with no mainland to which it can relocate its cultural enrichment. It is already overloaded with refugees in huge open-air camps, so it is presumably desperate to prevent the arrival of any more boat people.

The main plot, however, is currently being worked out in two-party consultations between France and Italy. The French and the Italians are practical people, and are not as deeply afflicted with political correctness as their more northerly neighbors. Under a fig leaf of EU legality, I expect some sort of common modus operandi to be worked out over the next few weeks, using various incentives — some nice, some not quite so nice — to induce the invaders to return whence they came, and to dissuade others from emulating their example.

But we shall see.

5 thoughts on “Camp of the Saints: The Invasion”