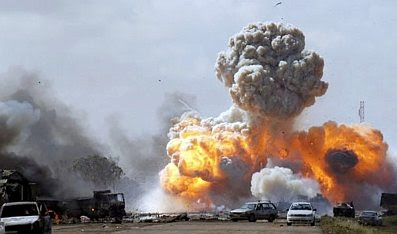 Two years into the reign of the Messiah, I thought it couldn’t get any worse. Especially in foreign policy — after the Cairo speech, and all the bowing, and an iPod for the Queen, and the cozying up to Chavez, how could it possibly get any worse?

Well, it has. Barack Hussein Obama’s foreign policy didn’t just crash and burn; it dug itself ten leagues deep into bedrock and pulled in the topsoil after itself.

And it’s not just Obama, nor all the other Democrats. The administration’s operation in Libya has been a notable occasion for bipartisan lunacy. A major chunk of the Republicans have drunk the ha-ha water and jumped into the bottomless pit with their Commander-in-Chief.

And it gets worse. I opened up a conservative opinion website this morning — I don’t want to embarrass it by naming it — expecting to find a refreshing change from the MSM, but alas! ’Twas not to be. I kept scrolling and scrolling, and everybody more or less agreed: “Obama has finally done something right. Maybe for the wrong reasons, but at least he’s going to get rid of that evil sumbitch Khaddafi.”

Their position wasn’t fundamentally different from that held by many of the opinionators at Huffington Post and Daily Kos, whose knee-jerk pacifism has mysteriously gone into remission. I took a look through their op-eds — there weren’t many; most of them weren’t discussing it — and the general attitude seemed to be, “Well, I’m not sure this is the best idea in the world, but, gee, it’s for a good cause…”

There were occasional voices of sanity on the right, of course. Frank Gaffney, for example, and Diana West, who described the Libyan action with meticulous accuracy as “making the world safe for jihad.”

In Congress, opposition to the Libyan caper is confined to hard-left Democrats and what used to be considered the right-wing fringe of the Republican Party. Regular Republicans — the kind who get re-elected fourteen times in a row and attend the same dinner parties as establishment Democrats — are not all that bothered about it.

Yes, Sen. Mark Kirk wants Congress to vote on something that he otherwise basically approves of. And Sen. Dick Lugar wants “more details”.

Certain Congressional Republicans would like Hussein to “explain” himself.

Some of the more daring Republicans are beginning to doubt that Obama’s war is a good idea.

Others are worried about the cost. Good old fiscal conservatism! Thanks, guys — glad to see you’ve got your priorities straight!

None of the major players pointed out that President Obama has committed an impeachable offense by usurping the specifically enumerated powers that are delegated to the Congress.

Nobody wants to deal with the fact that the Constitution reserves the authority to declare war solely to the Congress.

If anybody had any lingering doubts that we are being governed extra-Constitutionally, this should have removed them.

But no: Congressional Republicans continue to dwell in La-La Loopyland, ready to argue over a jot here and a tittle there, but totally indifferent to the fact that they have become neutered spineless lickspittle treasonous cowards, and are content to serve as eunuchs in the court of His Majesty the Caliph of the United Islamic Republic of America.

You don’t have to be a foreign policy wonk to know that flying close air support for the Libyan rebels is a bad idea.

Regardless of how murderous a thug Muammar Ghedaffi is — and he is sure enough a bad ’un — taking him out will inevitably bring on another Khomeini Moment, one of those many unlearned lessons of history that we seem doomed to repeat over and over again.

The unfortunate fact of the matter is that there are only two alternatives in the Muslim world, especially among the Arabs: The Thug or The Street.

When you blow away The Thug, your only choice is The Street.

Oh yes, you want to believe in Arab Democracy. We all do. But that’s a phantasm, a confection spun out of the finest gossamer, a figment of your own feverish imagination. Your conviction that democracy can be realized is born out of the delusory mind-state that desires a thing so badly that it thinks it can just be wished into existence.

And that means the Muslim Brotherhood.

Be careful what you wish for, guys. Because you’re about to get it.

And not too long after that you’ll be pining for good ol’ Moamar Qaddafi, the Man of Many Spellings.

19 thoughts on “The Triumph of the Loons”