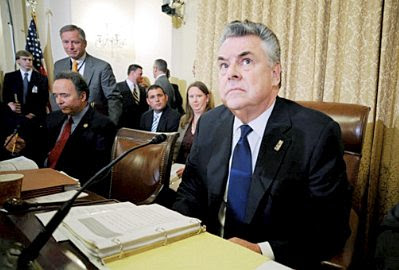 Regular reader and commenter Zenster has compiled a report on the King hearings, with a particular focus on the egregious comparison of American Muslims with interned Japanese-Americans during World War Two.

Of Kamikazes and Shaheeds — King Drives Honda Over the Edge

In advance of hearings on Islamic radicalism by House Homeland Security Committee Chairman Peter T. King (R-NY), protests are mounting from both inside and outside of the Muslim-American community. One particularly outspoken group is Japanese-Americans who have deemed the House hearings as “sinister”. This is a remarkable charge and one that merits some investigation.

… when I was a young child during World War II, we were confined for several years at Camp Amache, an internment camp in southeast Colorado, simply because we were of Japanese ancestry. Hundreds of thousands of innocent Japanese Americans were unjustly placed under scrutiny and suspicion because few in Washington were brave enough to say “no.”

This is both misleading and an incomplete presentation of facts surrounding the controversial internment of America’s West Coast Japanese population during World War II. At the time of these relocations, official agencies were unable to introduce important intelligence documents that justified this action for fear of causing a significant breach in national and military security:

… Naval Intelligence intercepts proved with no doubt whatever that, during the war, the Japanese had an extremely effective espionage network in the U.S. and that the U.S. government had in its possession names and identification of innumerable active Japanese agents. So as not to stir up race riots or any such disturbances, the U.S. has never released the names of the extraordinarily numerous Japanese agents in the U.S. The American public consequently remains, to this day, ignorant of the massive wartime Japanese intelligence operation in the United States. [emphasis added]

It becomes clear that — whether an overreaction or not — there existed definite and justifiable grounds for the internments. Furthermore, placing such singular focus on the Japanese relocations ignores how German and Italian immigrants experienced similarly suspicious treatment during that same period.

In later years while reparations to America’s interned citizens of Japanese descent were under consideration, former Senator Samuel Ichiye Hayakawa (R-CA) — arguably one of the most distinguished Japanese-Americans — sent a letter to the White House stating:

Japanese and Japanese-Americans in the Western states were relocated during World War II for their own safety at a time when the U.S. and Japan were at war. The relocation was in no way punitive. It was to remove the Japanese from the coastal areas for fear of what might happen to them if a hostile Japanese invasion force was to land on our shores.

All of this is conveniently swept under the rug of ongoing Politically Correct protests regarding the fear that America’s Muslim community might face similar treatment. The overlooked parallels are especially poignant, given how pervasive jihadist doctrine is in both Qur’anic scripture and regular addresses given at Wahhabist-controlled mosques throughout America.

There is also a note of immense hypocrisy that rings forth from Japanese-Americans who engage in these protests. Nowhere is there any outcry over how their ancestral homeland of Japan routinely restricts immigration from nearly all countries and has one of the smallest non-Japanese descended immigrant populations in the entire world. Nor is there any recognition that America admits more foreign immigrants on annual basis than all of the world’s nations combined.

Some statistics about Japan:

None of these figures are able to reflect the likely high percentage of fellow Asians that comprise Japan’s immigrant population. In addition, anecdotal evidence consistently reveals Japan to be one of the most racist and xenophobic countries in both modern and historical times.

Yet, somehow all of this is lost on Japanese-Americans who protest as “sinister” hearings into another of this world’s most xenophobic and racist cultures: Islam. Still, Representative Honda is somehow compelled to note that:

Rep. King’s intent seems clear: To cast suspicion upon all Muslim Americans and to stoke the fires of anti-Muslim prejudice and Islamophobia. By framing his hearings as an investigation of the American Muslim community, the implication is that we should be suspicious of our Muslim neighbors, co-workers or classmates solely on the basis of their religion.

Again, it seems to elude Representative Honda that Imperial Japan and modern-day Islam both share a doctrinal similarity that includes sensitivity to humiliation, a celebration of death in battle, abuse of civilian noncombatants and indiscriminate targeting of civilian populations during attacks.

He continues with this observation:

This should be deeply troubling to Americans of all races and religions. An investigation specifically targeting a single religion implies, erroneously, a dangerous disloyalty, with one broad sweep of the discriminatory brush.

All without observing that Islam demands that Muslims engage in seditious activity no matter where they reside and commands them to contribute tithes that help finance global jihad as well. If such doctrinally mandated activities do not constitute “dangerous disloyalty”, it is difficult to imagine what does.

Representative Honda then proceeds to flog the persistent meme of “a tiny minority”:

While protecting our homeland from acts of violence should be a top priority for policymakers, we must remember that no entire community can be held responsible for the acts of a few people.

All the while ignoring the results of public polls, which routinely find a high percentage of Muslims in support of the use of terrorism to spread Islam and Shari’a law.

Finally, his closing statement reveals a profound lack of knowledge about Islam:

We must aggressively investigate criminal behavior, watch for patterns that point to emerging threats, and stay constantly vigilant as citizens, but we must also not divide or target Americans simply on the basis of their faith or ancestry.

So, he advises that “we must also not divide or target Americans simply on the basis of their faith or ancestry” but, evidently, has no concerns about Islam continuing to divide its own communities into Muslim and dhimmi classes, all the while targeting its victims specifically “on the basis of their faith or ancestry”. This is especially disturbing in light of escalated Muslim attacks on Iraqi and Egyptian Christians in just the last several months. Such religious discrimination is part and parcel of Qur’anic doctrine and cannot be ignored when challenging those who would expose this aspect of Islam.

Being a member of a minority himself, Representative Honda should be especially sensitive to racism as it is practiced around the globe and not just in his own back yard. Nowhere does he unleash any criticism of his ancestral Japan, despite its intensely bigoted and homogeneous culture. Nor does he decry the countless wrongs committed by this world’s most violent and bigoted creed. Such selective criticism can only serve to discredit and negate any moral authority that this Politically Correct politician seeks to summon up with his ill-informed and misleading rhetoric.

11 thoughts on “Of Kamikazes and Shaheeds”