Our Norwegian correspondent Vikverjer has translated an interesting article about the ascendancy of cultural enrichment in a formerly Norwegian suburb of Oslo.

The article below was published today in Aftenposten, one of the major Norwegian newspapers:

“It is difficult to be ethnic Norwegian here”

Patrick Åserud has had enough of pressure about salami-free food, blond-hate and horrible language skills.

“I will not let my children grow up here. I do not dare to.” 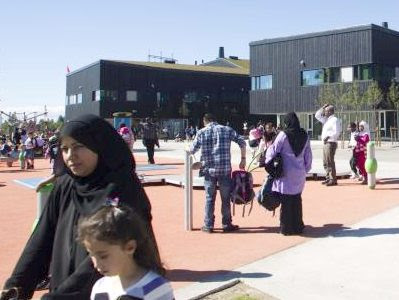 He has made up his mind. After spending his whole life in Groruddalen [a district of Oslo], the developments of the past year have frightened Patrick Åserud into leaving. In the coming summer he will move with his wife and kindergarten-age daughter from Furuset [in Groruddalen], and out of the city.

He is moving from a local area he thinks is on its way to falling apart due to the heavy weight of failed integration.

“It has become difficult to be an ethnic Norwegian in Groruddalen. There are huge language problems, and additionally a pressure that we [Norwegians] must adjust to norms that feel completely foreign to us, who have a Western lifestyle and mindset.

“There are kindergartens where almost no children or parents speak Norwegian, and there are schools where children are threatened with beatings if they bring salami with them for their school lunch.

“Girls are bullied for being blond, and they colour their hair dark to avoid it and fit in. It is especially not okay to be gay at the school, nor atheist, and especially not Jewish.

“Over the last three years it has been particularly frightening to watch and hear about everything that happens,” says Åserud.

A majority of parents need translator

He has quit his job at the kindergarten. It is especially during his fifteen years as a teacher at the school and kindergarten that he has noticed the changes in the population.

“We had to use a translator in 10 of 18 conversations with parents.

“What kind of possibility does one have to create a good environment and a co-operate with the families, when the situation is like this?” asks Åserud.

He feels that it is he and his family who must integrate as a minority in their own country.

“I was positive and optimistic earlier. But it has crossed a line when there is a majority that does not speak the language well.

“There are many of us that have strong feelings about this, regardless of the colour on our skin. An Indian family I know are expected [by the muslim immigrants] to live and behave as Muslims, just because they have brown skin colour.”

“Many people will perhaps think you are intolerant and not in line with the ‘New Norway’?”

“If that is the case, then there are very many who are not in line. The reality is that [Norwegian] people move away from this area. And they do so because of experiences they have had,” says Åserud.

Numbers from Statistisk Sentralbyrå back up his statement. 3,000 fewer ethnic Norwegians now live in Groruddalen, compared to only two years earlier. More people are moving away faster then before, but even over a longer time-span the trend is clear: Groruddalen has lost 20,000 ethnic Norwegians the last fifteen years, and still the population continues to grow.

The ethnic Norwegian percentage in Groruddalen has gone from 82% to 56% in fifteen years.

And this year Åserud will become a part of that statistics. He is moving with his family to [the town] Hamar.

“We have no connections there, but we can’t afford a house in Høybråten, Røa or the other places [my comment: Generally more ‘whiter’ areas populated by the elite politicians who praise ‘multiculturalism’ — translator] where we don’t feel like foreigners when going shopping,” says Åserud.

He has no good recipe for how the development can be turned around.

“I don’t know. I fear that it will start becoming like Rosengård [widely-known immigrant/Muslim area in Malmø in Sweden with heavy crime]. There shots are fired in the streets on a average once every week. I wish the best for this town, but I feel I can’t carry the integration on my shoulders,” says Åserud.

A sidebar on the article:

Last week [the newspaper] Aften revealed that four out of ten parents are trying to move their children away from minority schools [schools where Muslims are usually in the majority].

The principals confirm that the number of minority [Muslims immigrants] students is given as explanation by those who move. School analyst Ivar Morken says that the schools have become like a “social garbage can”, because they are thrown into the demographic problems that schools can’t solve.

Below the article, various Norwegians have left comments. A sample:

22 thoughts on “It’s Hard to be Norwegian in Groruddalen”