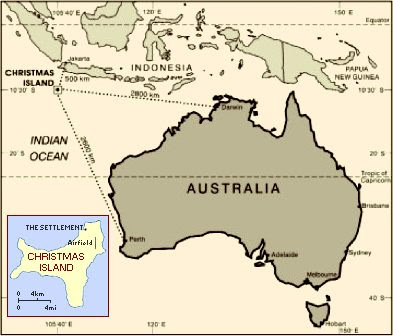 Although Christmas Island is just south of Indonesia, and is only 300 miles away from Jakarta as the crow flies, it is actually part of Australia. In recent years the island has become the preferred destination for immigrants from South Asia and Africa who want to gain entry into Australia and take advantage of the country’s generous asylum laws.

A favorite technique, particularly among Afghans, is to send an unaccompanied minor child on one of the boats to Christmas Island. The culture enrichers know that the law requires the expedited processing of underage refugees. Once the kid is in, he can contact the rest of his family, who will then be brought in under the “family reunification” rules. Everyone — Dad, Mum 1, Mum 2, eleventy children, Grandma, Grandpa — can then expect to be fed and housed at the expense of the Australian taxpayer.

Nice work if you can get it.

It’s no surprise that as soon as the laws were loosened, Christmas Island rapidly filled up with cultural enrichment. The detention camp is crowded, and accommodations there are primitive (by Australian standards, although perhaps not in comparison with Mogadishu), so the detainees have recently become restless and started to riot.

The night before last saw an escalation of the riots to include Molotov cocktails, arson, and general mayhem. When you watch the news videos at the bottom of this post, you’ll hear the announcer report that it was only a small portion of the detainees — 10%, or about 250 — who caused the trouble, with the rest of the asylum-seekers holding back from violence.

This is the Christmas Island version of the Tiny Minority of Extremists: we are required to acknowledge that the Vast Majority are Peaceful Moderates, and therefore we can do nothing about the situation except increase the local police budget and maybe put up a lot of razor-wire fencing — and even that might violate the human rights of the detainees.

Here’s a report from Yahoo:

Police fired dozens of tear gas canisters at more than 100 rioters in a pitched battle during which a number of asylum seekers escaped.

Police retreated after fighting for an hour and fired teargas over the fence in an attempt to regain control of the sprawling centre.

At least nine fires were lit by several distinct groups who threw Molotov cocktails at the centre’s buildings.

A wheelie bin was set alight and pushed into an ablutions block and seven canvas tents were set ablaze. Flames shot 10m into the air.

Groups of asylum seekers ran through the camp chanting slogans [one wonders if these “slogans” involved something about God being greater — BB].

The renewed violence came as the full extent of a riot on Wednesday night became clear yesterday, with confirmation that a mob of 250 men threatened security guards with sticks and rocks and backed down only after police blasted canisters of tear gas at them.

Immigration officials struggled to explain how detainees have been able to make a mockery of security at the North West Point centre, which houses single men deemed too risky to keep in medium-security units.

Detainees broke through fences yesterday and walked in and out of the high-security compound as they pleased.

Below is some additional background from Nilk at Vlad Tepes:

Way, way off the north-west coast of Australia, closer to Indonesia than Oz, lies a little itty bitty speck called Christmas Island. It used to be considered Australian Territory on a par with the mainland until the “asylum seekers” and their enablers, the people smugglers and refugee activists, realised that if you got to Christmas Island and claimed asylum, you’d be afforded all the legal and other comforts you could ever want without having to get all the way over here.

So a detention centre was built there, to process claims, which was difficult because somehow, these “refugees” could make it to Indonesia from Iraq, Iran, Afghanistan, Pakistan and so on, and get onto a boat, yet still not have any papers that would identify them.

This detention centre wasn’t built to house more than around 600 or so people.

Under John Howard, aka the Evil Right Wing War Monger (the last conservative Prime Minister), regulations were toughened up and an exclusion zone was devised. So now you could get to Christmas Island, but you didn’t automatically get Legal Aid or instant acceptance. Also introduced were Temporary Protection Visas, which did not give you all of the rights and benefits of a full Refugee Visa.

When John Howard was voted out in 2007, Kevin Rudd of the Australian Labor Party became PM, and as a part of his platform, he promised to loosen up the harsh regime that Howard had instigated.

Bolta’s graph [see Vlad for the image] outlines how since the laws have been loosened, there has been an exponential increase in boats arriving carrying illegal immigrants (or asylum seekers if you prefer).

There are currently over 2000 of these people on Christmas Island (with several thousand more on the mainland in detention centres and four-star motels), from several different nationalities.

Below the jump are two Australian news videos about the events on Christmas Island:

More on asylum-seekers at Christmas Island:

It will be interesting to see how much worse it has to get before the Australian Government comes out of its multicultural fugue state and decides to change the law back to something relatively sane. Since the Labor Party is currently in power, no one should expect anything to happen in the near future.