For many years it was forbidden to have a serious public debate about the Islamization of Germany. Pointing out the growing presence of a parallel Turkish society in many German cities was considered off-limits. The fact that a substantial number of Turks in such enclaves were becoming Islamic militants was also to be brushed aside — let the security services handle it; it was not a topic for public discussion.

All that has changed over the last few months, with Thilo Sarrazin’s book leading the new wave of glasnost concerning immigration. Mr. Sarrazin’s book became a best-seller overnight, and everyone is now talking about immigration and Islam.

The new openness does not mean the rules of discourse have changed — glasnost has yet to be followed by perestroika. Much media coverage is devoted to the attempt to demonize and suppress anyone who dares depart from the politically correct multicultural “narrative” that has been dominant in Germany for the last two generations. Politicians — many of whom rely on the Turkish vote for their margin of victory — continue to repeat the mantra that “Islam is a part of Germany” in an attempt to dispel any lingering public misgivings about the long-term consequences of such an assertion.

Yet the dissenting voices are being heard in ever-greater numbers. The Minister for the Interior, Hans-Peter Friedrich, is the latest to break out of the straitjacket and express heretical doubts about whether Islam really is a part of Germany.

Even Mr. Friedrich, however, confines himself to the mildest of anti-PC statements. He hastens to assure his audience that “people of the Islamic faith who live in the federal republic… naturally belong to the country as citizens.”

In other words, those who made it to Germany in the past and continue to reside there somehow belong there, despite their parallel society and enmity to German culture. In a sense, the Greens are right to say that “[a]ll Friedrich has to do… is go out on the street in Berlin and see who is living here” to realize that Islam belongs to Germany — the facts on the ground prove it.

So there’s a long way to go before a prominent politician in any major party is willing to plunge into the deep waters of Islamophobia and assert that it is the presence of Islam in Germany that is the problem, and not how long the immigrants have been there or how quickly they learn German.

Many thanks to JLH for translating the following article from Die Zeit online:

For Friedrich, Islam Does Not Belong to Germany 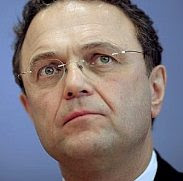 The new interior minister had barely received notice of his appointment from the Federal President when he contradicted the head of state: Islam is not a part of Germany.

Federal President Christian Wulff unleashed a debate in Germany with the statement: “By now Islam belongs to Germany.” Now the new minister for the interior, Hans-Peter Friedrich, has contradicted him. During the press conference shortly after he assumed office, he said: “That Islam belongs to Germany is not proved by history.” The CSU politician said that people of the Islamic faith who live in the federal republic, however, naturally belong to the country as citizens.

Friedrich continued that he stands by the opinion on the subject which he had given voice to in the Bundestag in the Fall as chief of the CSU state group. At that time, he had commented on Wulff’s speech on the Day of Unity, that the guiding culture in Germany is the Judaeo-Christian culture. “It is not the Islamic culture and it will not be in the future either.”

“Hans-Peter Friedrich has not yet been interior minister for 24 hours and already he is already smashing the china,” Said fraction head Renate Künast. All Friedrich has to do, she said, is go out on the street in Berlin and see who is living here. For a long time, there have been many people who have the central point of their lives here. “That is why Islam belongs to Germany.”

Greens chief, Cem Özdemir explained that Friedrich apparently has “a crude understanding of society if he accepts that people of Islamic faith are part of Germany in 2011 and simultaneously declares Islam not to be, on historical grounds.

Friedrich’s reply was that, as responsible minister, he intended to accord the Islam conference a high value. It is, he said, matter of utilizing the different potentials of a society. Part of that is “bringing things together and not driving them apart and polarizing them.”

The German Islamic Conference is a platform for a dialogue between the state and the representatives of about million Muslims in Germany.* It was started in 2006 by then Interior Minister Wolfgang Schäuble (CDU). Friedrich emphasized immediately that anyone who lives or grows up in Germany and wants to be integrated here, “must above all else know German.” With that, like other representatives of the government, he contradicted the comments of Turkish President Recep Tayyip Erdogan. , who had told his compatriots this past weekend in Düsseldorf that Turkish children in Germany must first learn Turkish and then German.

16 thoughts on “Does Islam Belong to Germany?”