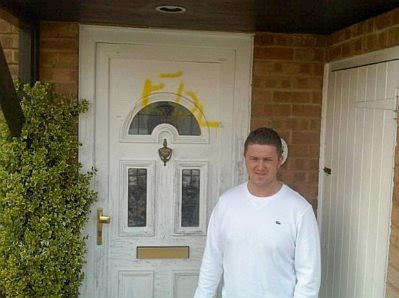 As has often been pointed out in this space, the most important theater of the Counterjihad struggle is the ongoing information war. Although we can whup the enemy’s fundament on any conventional battlefield, we are currently being defeated, because Islam is winning the information war hands-down.

Right now The English Defence League is the biggest threat to the Jihad in Britain — and possibly in all of Europe. By exposing the truth about Islam, the EDL is awakening the average native English citizen to what Islamization really means.

Islam cannot succeed in the long term if this education process continues, so Muslim zealots — and their allies on the hard Left — are determined to subvert and distort the image of the EDL, thereby neutralizing the message it conveys.

The preferred technique is to cement in the eyes of the general public the idea that the EDL is a “racist”, “Nazi”, and “fascist” organization made up of violent lower-class hooligans. The latest examples of this information war in action are a series of vandalism and arson attacks on private homes in Luton that are meant to look like the work of the EDL, or to be targeting the EDL, or both.

If these attacks succeed in their purpose, the EDL will be discredited and its members intimidated — a twofer for the Great Jihad.

The following article about the situation by EDL leader Tommy Robinson was published tonight on the English Defence League website (see the original article for links to full-size versions of the photos):

Since we held our extremely success full demonstration in Luton the town is alive with positive talk among the local people about the EDL. People were expecting a bloodbath, a bunch of rowdy thugs out to fight and riot with the Islamic community. Well that was the hype anyway — or should I say “Hope” for some? Of course, that’s not what we delivered.

The level of opposition that we encounter from every angle is astounding when you think about it. The aggressors and idiots who try to provoke and attack us come from the Islamic community, from the deluded and often riotous militant-Left brigade… and let’s not forget the real “far right” — those white supremacist dinosaurs. And of course there are many other bands of various misfits.

The point is we have survived many attacks, and we have become bigger, better and more organised than people give us credit for. Our opponents know this, so their actions become more and more extreme. This is exactly what we have seen in Luton since the demo.

Some people just can’t accept any positive media about the EDL, they can’t accept anything less than a sensationalist or even manufactured headline that paints us in the very worst light imaginable. That is how scared these people are about our message. They are so scared that we are gaining ground that they will do anything they can to turn the screw on us. They know that with growing mainstream support, not just with the working class but with middle England too, we are becoming their worst nightmare. To counter our success it takes something drastic. Desperate times mean desperate measures.

One example that comes to mind is when Socialist Worker reported that Bolton Mosque had been attacked on the eve of our demonstration in the city. They made it really clear that we were almost definitely to blame. But, of course, the incident had nothing to do with the EDL — and the police were all too happy to make this clear to the local community.

But this sort of thing is happening daily — our opponents reporting their own prejudiced assumptions as if they were unbiased news stories.

Why do some people still believe that the EDL racist? Because that’s what they really want to believe! They want us to be the bad guys, and for everyone else to believe that too, because perhaps then people won’t realise how clueless groups like Socialist Worker and the UAF really are.

They accuse us of dividing communities. How? By telling the truth? We encourage an open debate, we educate our members. They keep talking about giving ‘no platform’ and ‘smashing’ the EDL. They accuse us of things without any evidence, and they continue to tell people that we’re racists despite all the evidence to the contrary.

Which group is really dividing communities? 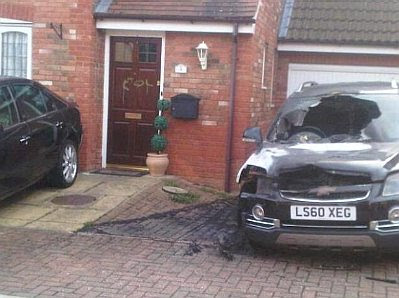 Anyway, here’s the latest example from Luton showing the desperate measures our opponents are willing to take…

Very recently people’s houses and property have been subjected to attack, their property vandalised, and then the letters ‘EDL’ daubed on a door, a window, a wall. The obvious intention is not only to intimidate, but to make the public associate the EDL with criminal behaviour, vandalism and destruction of property. Who would want to align with an organisation like that? Joe Public won’t get on board when we are seen as the aggressors, and it’s very much in our opponents’ interests to make sure that happens — whatever the cost.

In the first week after the demo in Luton there were 8 attacks that I know of. 4 attacks happened in the same road. It all started with yellow spray paint graffiti. Then the council offices were attacked and blame was aimed at the EDL. Now things have advanced somewhat. We’re seeing cars being burned out — 7 have been set on fire in the last week alone — each a random victim on different estates.

I was told that there had been an attack on a house that I used to live in so, of course, I had to find out what happened. What you see in the above picture is the house next door. The car had been set on fire and vandalised. Notice the EDL painted on the door to make this look either like a warning or a claim.

Luckily the car was not a petrol motor or it could have exploded and ripped through the house, possibly killing or injuring the family inside. Still, the flames did reach the house, and could have set light to the wooden facias. This is a family with kids for God’s sake! This bloke and his family have had absolutely nothing to do with the EDL, but now he’s a victim because of it? What kind of a message is that?

I did speak with the bloke whose house it is and he was really upset, and rightly so. I had to think what I’d be like if that happened to me, I felt really bad for him, and partly responsible. But then I thought, well why should I feel responsible? I didn’t do this, the EDL didn’t do this, someone else did, and that’s a fact.

Obviously it was not anything to do with the EDL, perhaps it was meant to intimidate me? I don’t know and I can’t be certain but what I can be certain of is that members of the black community also had their properties vandalised and the letters EDL daubed on the scene. Then recently as just a couple of days ago in fact, a couple of local Muslims come up to me and asked why had their cars been burned out and torched outside their house? I said I didn’t know, again I know it wasn’t anything to do with the EDL. Something just wasn’t right so I went to Bedfordshire Police and said something had to be done because it looks as though someone is doing this to cause a war.

The dirty war is one where hands don’t need to be dirtied at all. Some people will use opposing sides to clash, to cause some kind of violent anarchistic revolution, because that’s obviously what these people want. What I’d say to Bedfordshire Police is to keep looking to the militant left rather than the so-called “far right”. 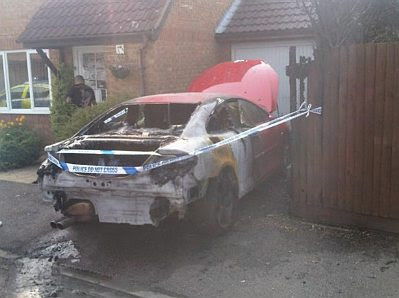 I’m glad to say that Bedfordshire Police have now arrested someone in connection to these attacks. They have confirmed that the person arrested has no connections to the EDL at all. However, we want to know who this person is, who this person was working for, and what his religious and political associations are.

So far there have been around 25 attacks that I can say I know of. It’s a small miracle our communities have not reacted to these attacks as yet. Let’s hope whoever is responsible for this is swiftly brought to justice.

This is a very dirty war make no bones about it. Please be vigilant, stay strong and never ever surrender!

2 thoughts on “A Luton Update from Tommy Robinson”