As regular readers know, the Austrian anti-jihad activist Elisabeth Sabaditsch-Wolff will go on trial again in Vienna on Tuesday morning.

Elisabeth has been charged with “incitement to hatred” and “denigration of religious beliefs of a legally recognized religion” for giving informational seminars about Islam. Tuesday will be a big day for her: a verdict may well be delivered in court that day. If she is convicted — which is a distinct possibility — she will then begin the difficult and protracted process of appealing the verdict all the way to the European Court of Human Rights.

We will live-blog her court appearance on Tuesday. This is a pivotal event, so stay tuned.

In today’s post about the 2011 CPAC conference in Washington D.C., Pamela Geller reminds her readers of the FDI event that she and Robert Spencer organized at CPAC this time last year. She mentions the list of speakers she featured at the event:

Last year I brought the world’s leading counter jihadists to CPAC: Wafa Sultan, Simon Deng, Anders Gravers, Steve Coughlin and others, to educate the CPACers on the jihadist threat — the political third rail.

Those who followed last year’s proceedings will notice the prominent absence of Col. Allen West and Elisabeth Sabaditsch-Wolff from this list. Elisabeth’s speech was popular with the audience that day, and earned a standing ovation. Videos of her presentation and that of Col. West went viral over the internet in the weeks after the event. 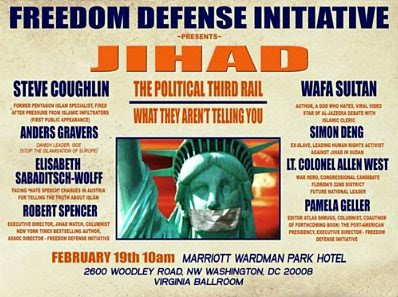 The absence of Elisabeth’s name from the listing of last year’s podium speakers is perplexing, given the fact that she is approaching a critical moment in her case. It is also disturbing that neither Atlas Shrugs nor Jihad Watch has posted any coverage of Elisabeth’s trial since last October.

We can only assume that this oversight on the part of the American Counterjihad’s most prominent bloggers is the result of two busy people who have many demands on their time, rather than a deliberate omission.

If there are any policy disagreements between the parties involved, we urge them to recall Ronald Reagan’s observation: “The person who agrees with you eighty percent of the time is a friend and an ally — not a twenty percent traitor.”

One behalf of the common cause, we call on Mr. Spencer and Ms. Geller to rectify this oversight and express public support for Elisabeth Sabaditsch-Wolff at this crucial moment.

There is more on Elisabeth’s case at the Save Free Speech appeal.

13 thoughts on “An Appeal to Rectify an Oversight”