When we began blogging we had a clear idea of which issues we thought were important but both of us knew that where we were headed was an unknown. It is one thing to have goals — in this case, to both fight against the undermining of Western culture by Islam and to rally people to Israel’s defense in order to further protect that culture. It is quite another to understand where this Garden of Forking Paths would lead us. Sometimes it is a blessing not to know the future.

We never planned to be a portal to Europe for Americans, but that’s what happened. Our job description grew in small, almost off-hand ways in the beginning. Then it became a long walk through the valley of the shadow of death for a while, and now it is something we never dreamed: a true, multi-continental effort that even crosses the equator. Who’d have thought?

The beginning of our journey toward things European occurred with a post I wrote in April 2005, “Buy the Book”. I’d found a news story on Middle East Online, of all places, on Denmark’s Queen Margrethe II. Their editorial interest lay in Danish royalty’s opinions about Islamic fundamentalism: 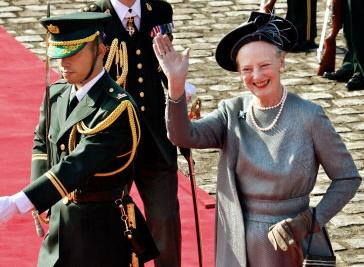 [She] warned against the rise of Islamic fundamentalism in Denmark and the world in a new book out on Thursday, saying people must on occasion “show their opposition to Islam”.

“It is a challenge we have to take seriously. We have let this issue float about for too long because we are tolerant and very lazy,” she said in the authorized biography “Margrethe” written by journalist Annelise Bistrup.

While she did not specifically refer to fundamentalism, she spoke of “these people for whom religion is their entire lives”.

This was a shocker. A European leader who spoke plainly about the problem?? Where was Queen Elisabeth? Never mind; we’d already seen Prince Charles in his jalabiya.

We became immediately interested in this Queen Margrethe and in her country.

As it turned out, her subjects returned our interest. And, of course, we were developing a correspondence and mutual interests with another Scandinavian, Fjordman — whom I later named “The Dark Prophet of Norway”. He has continued to live up to his soubriquet.

We focused on these countries, especially the problems being swept under the rug by Sweden… only Fjordman kept pulling up the rug and pointing to the sweepings. The takeover became harder to ignore; the active collusion of the Swedish government to flood the country with Muslim immigrants while refusing to discuss the resulting problems was shocking. True, what Islamic countries did to and against their citizens was barbaric, but these things — honor killings, rapes, attacks on Jews, etc., — were happening in Europe, in one of the wealthiest, most sedate of the modern welfare states on this planet.

The learning curve on the fact of the Islamization of Europe by a flood of immigrants was not an easy one to master. It ran contrary to everything we thought we knew about “civilized” Europe, an ancient place full of distinct cultures and languages. It’s deeply unsettling when everything you thought you knew turns out to be wrong.

The Anglo-Saxon world, if you excluded the sovietization of the UK, felt more secure. But that, too, was an illusion, as we were to discover. Slowly, as the idea of a Counterjihad alliance was born, we turned to the earlier voices who had warned us: Bat Ye’or, Oriana Fallaci, Phyllis Chesler, Mark Steyn. The rigid criminalization of speech into categories of hate — in Canada, in Denmark, in Austria, in Finland — was essentially disturbing. In our own country it was more subtle and less marked.

Denmark’s newspaper, Jyllands Posten brought things to a head with the Motoons. Or rather, they began the process. When the cartoons were originally published, they were little remarked upon in the Arab world. An Egyptian newspaper ran an account of the story, but there was no public pushback until…until a Danish imam made a tour of Middle Eastern countries with copies of the cartoons laced with much uglier pictures he’d inserted himself, just to get the conflagration going.

He succeeded quite well. Most Western media refused to run the cartoons. Middle Eastern countries began a boycott of Danish products. Arab politicians and diplomats began their pressure on Denmark’s Prime Minister to punish the newspaper. No matter how often it was explained to them, the concept of free speech didn’t sink in. It can’t. Free speech is as far from Sharia Law as you can get.

Meanwhile, Europe continued down the Yellow Brick Road with the so-called Constitution (now the Treaty of Lisbon) that no European country wanted but everyone got anyway. It’s clear that if the economic hard times don’t destroy this artificial union, the cultural cracks will certainly widen enough for all the bureaucrats in Brussels to eventually fall in.

The Counterjihad alliances in Europe have continued their work with one another. People from very different places have come together, moving past their language barriers to weave an informal, robust network of information-sharing. Would that the groups in America cooperated as cohesively as our allies across the Atlantic.

Among the many surprises in this journey has been the continued level of interest by wise Americans who want to know what is going on beyond our borders. Yes, we have a large European audience, but it is smaller than our readership in the U.S. This gives me hope that beyond our differences and beyond the distances involved, we can work to our mutual benefit to defeat those who would have us live under some universalist yoke, be it transnational oligarchs or Islam’s various — and lethally opposed — versions of their unrealistic Ummah.

Many Americans realize we are no longer separated from others by distance or by disparities in wealth. Our economic ruin, whether deliberate or not, will serve to bring our expectations into line with the rest of the world. We have learned the folly of throwing money at problems that were created by money in the first place.

Americans who read Gates of Vienna are conservatives. The rare liberal who wanders in doesn’t stay long. They are, for the most part, fiscal conservatives. Their social philosophies regarding marriage, abortion, etc., are probably more varied. The fact that these subjects don’t come up much for discussion is obvious: other things have taken a back seat to our survival as a Western-based culture. In that respect, Israel is our canary in the coal mine. If we don’t ensure that she has air to breathe, we’re the walking dead ourselves.

Our donors today, some of them coming in multiples from the same place, are:

Australia, Iceland, and the UK

Many thanks to all of you, in all of your diverse places. Your generosity keeps us going.

8 thoughts on “A Sense of Place: Where We’ve Been”