One of our Slovak readers, who prefers to remain anonymous, sends a translation about recent events in his country’s capital, along with this introductory note:

Last week a rally in support of the persecuted Christians took place in Bratislava. Your readers may be interested in how Slovak politicians react to recent horrible events concerning Christians abroad.

Below is his translation of an article from the respected Slovak newspaper SME:

Palko: Europe Shows Disregard for the Killing of Christians 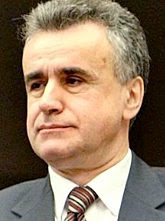 Bratislava — Europe hesitates with expressions of solidarity, as if the killing of Christians in the world was not worth noticing. Those words were stated today to the News Agency of the Slovak Republic by the chairman of the non parliamentary party Conservative Democrats of Slovakia (CDS) and former interior minister Vladimir Palko, who attended the rally in support of the persecuted Christians in Bratislava. The event had been arranged by Young Conservative Democrats of Slovakia, which is a youth movement of CDS.

“The motive is the increasing persecution, even killing of Christians all over world. Since we announced this event, several dozen Christians have been killed in Nigeria, 21 Christians in Egypt on New Year’s Eve, and many other incidents. It’s becoming increasingly apparent that this problem is acute,” Palko pointed out.

According to him, today’s rally resulted in an appeal addressed to the Slovak President, the Slovak government, and the National Council of the Slovak Republic, urging a push through our foreign policy for the observance of human rights for Christians and freedom of religion worldwide.

Palko is convinced that publicizing the persecutions is the first step for the protection of the persecuted. “We believe that this event will also inspire people in other European countries, and it has already happened. For example, I know that this rally has been an inspiration for the event which will take place on January 18 in Saint Wenceslas Square in Prague, Czech Republic. It’s possible that similar events will be arranged also in other European countries,” he added.

Not only a crowd of a few hundred people that attended the rally taking place near the convent church of the Notre Dame order, but also a member of European parliament Anna Zaborska (Christian-Democratic Party) who came to show her support. “The attacks against Christians intensify, and the reaction of the EU and Slovakia does not seem adequate to me. The reason why I attended this rally is because I intend it as an open declaration of my support,” she stated for The News Agency of the Slovak Republic.

Zaborska is also ready to ask in writing the President of the European Commission José Manuel Barroso and High Representative of the EU for Foreign Affairs Catherine Ashton to name the particular steps the European Commission has taken in order to support of the Christians all over the world. “I have arranged an appointment with our Minister of Foreign Affairs Mikulas Dzurinda (Slovak Democratic and Christian Union), where I plan to discuss the possibility of Slovakia joining the initiative of Poland, France, and Italy, for the EU should be the first community giving asylum to Christians expelled from their homelands,” she added.

26 thoughts on “The Growing Worldwide Persecution of Christians”