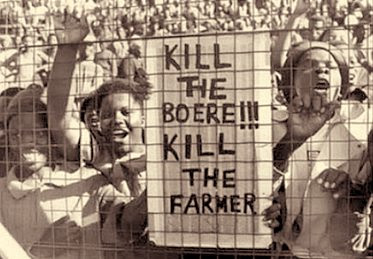 Nothing is more likely to cause an outbreak of the Screaming Nazi Heeber-Jeebers than mentioning the genocide of whites in South Africa.

It’s not a good idea to bring up the topic in polite company in my part of the world. If you do, you will immediately be identified as a sympathizer with — if not an outright member of — the Ku Klux Klan, the Aryan Nations, or the National Socialist White People’s Party. Even supposed conservatives will look at you askance and sidle away to ensure that none of the “racist” muck spatters on them.

But facts is facts.

White farmers are being assaulted, driven from their homes, and murdered, and the sole motive for these crimes is that the victims are white. Unfortunately, this race-based motive makes no difference: the charge of “racism” can only be applied to white people. When a non-white commits murder for racial reasons, only the murder is condemned, and not the motive. No “hate crime” here! If the races were reversed… Well, you all know the drill.

Coming on the heels of my previous post about Israel and the UN Declaration on the Rights of Indigenous Peoples, one thing is obvious: whites are not the indigenous people of South Africa. They have no better claim in that regard than the Palestinians do to Israel.

However, the Palestinians are at least conceded the right to their own homeland. This is not true of South African whites. Whenever a Palestinian suffers a hangnail or misses a meal, he is featured on NPR or the BBC as a victim of the “Israeli occupation”. But an Afrikaner who is butchered by machete in his own bathtub merits not even a mention in the same news outlets — his plight is invisible to the media.

Unless, of course, he is a prominent neo-Nazi — then his death will draw above-the-fold headlines. And the subtext, or even the explicit text, will be that he got what was coming to him.

More than 90% of the UN’s human rights boilerplate is devoted to Israel and “the plight of the Palestinian people”. To trans-national leftists, it’s a given that they deserve a homeland.

But what about whites in South Africa? Where is their homeland?

If they are being ethnically cleansed and butchered, to what refuge can they flee?

This is the problem that the organization Jus Sanguinis was established to address. A member of the organization emailed me a few weeks ago, but it got lost in the shuffle. I am happy to have been reminded of the site, and urge everyone to pay it a visit.

Before you start on me: yes, I know what kind of company I am keeping by linking to Jus Sanguinis. But I don’t accept guilt-by-association. And, as pointed out above, no one can stand up for white victims of racism without encountering Nazis, white supremacists, Aryan nationalists, etc., who all advocate for the same issue. There’s no way around it.

But take a look at the issue itself. Examine it on its own merits.

Jus Sanguinis argues for a “Right-of-Blood citizenship policy to preserve a Nation’s Cultural & Ethnic Homogeneity”. Using this standard, if whites in Africa cannot live in a secure homeland in their continent of their birth, they must be granted a “right of return” to the nations of their ancestors in Europe:

Readers who no longer suffer from the Screaming Nazi Heeber-Jeebers are advised to visit Jus Sanguinis and evaluate the organization’s case.

If you live in Idaho or Nova Scotia, you are unlikely to face what the whites of South Africa have to deal with every day. In all probability you will not be visited by machete-wielding marauders and be forced to flee for your life with nothing but the clothes on your back.

So put yourself in their position. What can be done? What should be done?

Do we simply leave them in the blood-soaked dust of their front yards, just to make sure that we’re not being “racists”?

One of the linked pages at Jus Sanguinis described the dilemma succinctly:

Europe commits Ethno-Cultural Suicide: Africa for Africans, Asia for Asians, and Europe for Everybody?