The following guest post by Phyllis Chesler was written in response to Martin Peretz’ “repellent” views regarding the bi-partisan push toward a presidential pardon for Jonathan Pollard.

Because of the subject matter, the comment thread for this post will remain closed. I haven’t the physical stamina to monitor people’s responses; it’s easier to simply omit that option. If you want to leave a comment on the subject, then the original post at Ms. Chesler’s website has commenting enabled.

One would-be commenter, who has already looked at the post over at her site sent me an email:

I just read the Chesler piece on Pollard/Peretz.

I can only say I’m stunned and disappointed almost beyond words about Peretz. If there is a somewhere after we leave this life Peretz is going to really have to explain himself.

His reaction is interesting because he’s quite familiar with the case. He is – or was – someone who thought that whatever Peretz had to say it couldn’t be “too bad” … but that was before he read Peretz’ own words. Many Americans who used to read The New Republic back when MP was the editor (i.e, anyone in the US not residing on the cliff end of the Lemming Left) are going to be taken aback. It would seem that the shunning process on the left is so utterly effective it produces the in-extremis position demonstrated by Peretz in his recent essays on Pollard.

You’ll also have to go over to the original post to get her links; it would’ve been too tiring for me to include them. Besides, I simply didn’t want to link to Peretz’ fulminations. There are lots of links besides those two URLs leading back to Peretz’ ravings. She has lots of background information for those of you not familiar with Pollard’s case. Ms. Chesler did an admirable job pulling all that information together, but then her work as an investigator of Islam – especially its codified treatment meted out to women – has no comparison in this country for depth of research and grasp of the material – not to mention her modulated presentation of horrific examples. The woman has nerves of steel.

In the last days of 2010, Martin (“Marty”) Peretz, the recently retired editor and publisher of The New Republic, published two rambling, hysterical, and gratuitously cruel pieces which strongly advised President Obama not to pardon Jonathan Pollard.

No one, other than his own demons, asked Peretz weigh in on the matter; he could simply have remained silent. After all, Peretz has lived the life of a wealthy, influential, and outspoken Jewish public figure-a life of honor and freedom. Pollard has been dishonored, despised, and imprisoned for 25 years, seven of which he was forced to spend in solitary confinement. He is a very sick man whose supporters have finally, after many hard years, begun to gather serious support for his release.

Noblesse oblige should have required Peretz to maintain a pained silence. Instead, on his own blog at The New Republic Peretz comes at Pollard with 800 pounds of shockingly anti-Semitic language in which he makes the case against the prisoner. 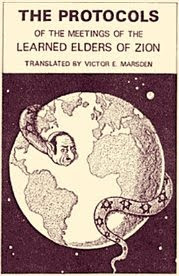 Peretz describes Pollard as “the single repellent figure,” a “sleaze bag transmogrified into not only a hero but a saint,” a “viper,” a “convicted espionage agent … who got paid for his work … His professional career reeks with infamy and is suffused with depravity.”

Peretz also accuses the prisoner of spying for Pakistan-however, there is no evidence of this in the public record.

Peretz not only despises Pollard; he despises his supporters as well and characterizes them as “brazen … professional victims, mostly brutal themselves, who originate in the ultra-nationalist and religious right. They are insatiable. And they want America to be Israel’s patsy.” If one googles “America Israel’s patsy,” the #2 result, right behind Peretz’s article, is a blog by an anti-Semitic conspiracy freak who argues that the Mossad knew about 9/11 in advance and links to an article by David Duke about “Israeli terrorism.”

Peretz damns Pollard because he does not like some of Pollard’s supporters who, he claims, engage in “incessant special pleading.’“ (“Special pleading?” Now where have I heard this phrase before?) If released, Peretz fears, Pollard will be greeted by “triumphant hustlers in the streets of Jerusalem … dancing the hora, of course, ecstatic.” And why? Because they will have “pulled one over on [President Obama]. Over America too.”

This language and these ideas are reminiscent of Hitler’s Der Sturmer, not of the left-liberal Jew who taught at Harvard for 40 years, bought The New Republic and is now temporarily living and teaching in Tel Aviv. When Jews are depicted as “repellent” and as “vipers,” I am reminded of Nazi-era propaganda; when Jews are depicted as sneaky, professional victims, forever pleading their special case even as they pull the wool over the world’s eyes and secretly continue to control the world, I find myself back in the fraudulent pages of The Elders of Zion or on the front pages of nearly every Arab and Palestinian newspaper today.

Peretz goes on to warn President Obama that “if you release Pollard, you would be encouraging the kind of ideological blackmail that has paralyzed Israeli politics not just in the ongoing diplomatic torpor…but through the general assault on civil liberties and freedoms that make the Jewish state so distinctive in the Middle East…Today they want Pollard free. Tomorrow they will be arguing the justice of racial discrimination against Arabs. The day after they will be pressing for limitations on civil liberties. Oh my, they already have.”

In other words, Peretz is telling Obama that if he pardons Pollard or grants Pollard clemency that Obama will be contributing to Israeli “racial discrimination against Arabs.” Further, Peretz assures Obama (whose candidacy he supported) that “Israel’s place in the American mind is quite secure…that American solidarity with Israel is quite firm.” In other words, that he, Peretz, rejects “the tremblings of some liberal Jewish (and a few non-Jewish journalists)” as irrational, that Pollard’s unending imprisonment is not viewed as a case of “anti-Semitism” among American Jews, that Obama will not lose Jewish support if he fails to pardon the prisoner, that Pollard is “not Natan Sharansky held captive after a twisted Soviet judicial hearing.”

Ah, but what if justice has not been served in the Pollard matter?

What if the charges against him are not true? What if only some of the charges are true-but are so minor as to pale in comparison besides far more major betrayals by other, non-Jewish American spies whose hands, unlike Pollard’s, are tainted with American blood? What if Pollard has done far more time than his crime deserves? What if others, whose crimes have been far more grievous, have been freed far sooner? Indeed, what if Pollard is neither the first nor the last American Jew in military intelligence who has been brutalized by anti-Semitism?

Might Caspar Weinberger’s own assistant Secretary of Defense, Lawrence Korb, who is now part of a serious effort to have Pollard pardoned-know something that Peretz refuses to understand? Korb has been working together with law professor Kenneth Lasson, former senior staff member of the Senate Intelligence Committee Angelo Codevilla, and former U.S. prosecutor and Army intelligence officer John Loftus on the Pollard case. Even as I write, Korb is speaking to the world media on this issue. With Barney Frank assuming a leadership role, 39 members of Congress and counting are also asking President Obama to grant Pollard clemency and to release him. Former head of the CIA, James Woolsey; former chairman of the Senate’s Select Intelligence Committee Dennis De Concini; and former U.S. attorney general Michael Mukasey have also urged clemency for Pollard.

Peretz stands alone. What can explain this? In my view, there is only one explanation.

Recently, Peretz himself was accused of being a “racist rat”-and at Harvard, on the very day Peretz’s many former students had chosen to honor him. I actually defended Peretz from his attackers. Now, in retrospect, I must reconsider that defense. While campus public shaming tactics are neo-fascist in style and intent, it is clear that Peretz’s unexpected attack upon Pollard is, indeed, a racist attack. It reeks of pure anti-Semitism.

This is Peretz’s bid to gain favor with the politically correct anti-racist left. How does a liberal Zionist Jew do this? He attacks, nay, he sacrifices and scapegoats the most vulnerable Jew, the Jew already accused of being a Jewish “traitor.” Pollard is guilty of dual loyalty-not Peretz. Pollard-the-dastardly-Jew chose Israel above America. No one should mistake him for Peretz-the-good-Jew.

While Peretz has, in the past, defended Israel among his left colleagues, (it is the only democracy in the Middle East, its Arab citizens will not renounce their Israeli citizenship to live under the authority of Hamas or Fatah and Peretz says so himself) and yet, at the end of the day, (which has now come), Peretz will not choose a right wing, nationalist religious Israel over and above his loyalty to the secular anti-Zionist “left.” His wild accusation against Pollard is meant to prove that once and for all. Yes, Peretz has struggled with his own dual loyalties, but he is now, publicly and emphatically choosing the liberal left which has rejected him-and he is doing so on the near-corpse of a Jew who has already been punished more than enough.

What a cheap shot! Peretz is casting the last stone, or rather, the only stone that counts, the stone aimed at Pollard at precisely the same moment when a host of wiser, kinder, saner voices are being heard at the White House.

Pollard might not be a saint but does each and every sinner have to be Jesus Christ in order to merit compassion in America?