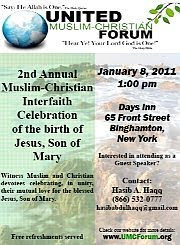 A Muslim community group wants to get together with Christians to celebrate “Jesus, Son of Mary”. When you hear about an event like this, it makes you feel all warm and fuzzy, doesn’t it? This sort of interfaith, ecumenical activity is what makes America a great place for people of all religions, right?

Right. That’s what you’re supposed to feel when you hear about it. If this sort of thing makes you feel nervous and uneasy, you try to squelch it, because you know such thoughts are intolerant. They may reveal a bit of inherent racism that you haven’t yet purged yourself of.

If it’s any consolation, in this case your instincts were correct: this is not a well-meaning interfaith outreach by Muslim-Americans wanting only to co-exist. It’s the tip of a very sharp stiletto of propaganda which, when fully inserted, is designed to do serious damage to the Christian faith.

The event in question is coming up next weekend in Binghamton, New York, and involves some characters who will be familiar to longtime Gates of Vienna readers. Many thanks to C5’s Simian Roadhouse for pointing me to the
flyer (pdf) for the event, and the press release for the United Muslim-Christian Forum:

In this upcoming joyful holiday season, where love and reverence for Jesus, born of the chaste Mary, is widely celebrated by Christians the world over, the United Muslim-Christian Forum (UMCF) is embarking on its 2nd annual event as a time for Muslims to acquaint those of their Christian brethren and the world, who are not aware of the fact that Muslims, too, share tremendous love for the blessed Jesus. UMCF invites Muslims, Christians, clergy and brothers and sisters in faith to join us on Saturday, January 8, 2011 at the Days Inn Binghamton, New York for this spectacular unity occasion.

In December 2009, the 1st annual celebration of Jesus Son of Mary brought together Muslims, Christians and members of other faith groups in Binghamton, New York, under the banner of the United Muslim Christian Forum to shed light on the esteemed role of Jesus, son of Mary. Muslims expressed the position of the Holy Quran- the only book other than the Bible that indeed verifies the existence of Jesus, defends his blessed mother from false allegations of slander and even contains a chapter entitled, “Maryam”, devoted to his mother Mary and his miraculous birth. Members of the public, press and media attended the 1st annual event and witnessed the devotees of these two great religions as they celebrated, in unity, their mutual love for the blessed Jesus. The United Muslim Christian Forum, again invites the world on Saturday, January 8th to witness this interfaith event.

By now some of you will be wondering, “Could this be…?” Yes, you’re right, it is indeed the Sheikh himself who is behind all this warm-hearted ecumenical brotherhood:

UMCF was founded by El Sheikh Syed Mubarik Ali Shah Gilani and stands on the unshakeable principle ‘Mankind is the Family of God’, belief in the One Almighty Creator, reverence for the Ten Commandments and fulfillment of the Golden Rule, “Do unto others as you would have others do unto you”. [emphasis added]

For readers who have never encountered Sheikh Gilani before: he is the founder not only of UMCF, but also Muslims of America (MOA), the front group for the terrorist group Jamaat ul-Fuqra.

Sheikh Gilani is a Sufi based in Lahore, Pakistan. He is no longer welcome in the United States, so he conducts his business here remotely, via local surrogates. The national headquarters of MOA is not far from Binghamton, NY; hence the intensive community outreach by the sheikh’s local organs.

For more information on the Muslims of America, see the “Jamaat ul-Fuqra” links on our sidebar. The most comprehensive information may be found in The Charlotte County Files.

Back to the UMCF and the “Celebration of Jesus, Son of Mary”. What are Sheikh Gilani and his crew in Binghamton up to with all this Jesus talk?

One clue may be found on the “About UMCF” page:

The United Muslim Christian Forum was established by His Eminence, El Sheikh Syed Mubarik Ali Shah Gilani, Vice Chancellor of the International Qur’anic Open University to recognize similarities between Muslims and Christians, diminish differences and seek a new solid foundation of joint respect based on the unchallenged commandments of God and love for the blessed Messengers of God (peace upon them all).

And there are two more hints in the flyer for next Saturday’s event:

Leaving aside the fact that the purported biblical quote may not actually be from the Bible (I couldn’t find it, but I’m not a Bible expert), these two verses are designed to demonstrate to Christians that God/Allah is a single undivided entity — that is, that there is no Trinity.

This is very important in Islamic theology. Muslims recognize Jesus (Nabu Isa) as a prophet, but he is not divine, and is not the son of God. Divinity is reserved for Allah, and Allah alone. As the UMCF About page mentions, Jesus is one of the “blessed Messengers of God”, which group also includes Noah, Moses, and (of course) Mohammed.

Here are some of the relevant verses in the Koran concerning Jesus (translation by Maulana Muhammad Ali). I’ve bolded certain phrases that are of interest for this discussion:

Jesus does play an important role in Islam, however. According to the Traditions of the Prophet, the Muslim Jesus was not crucified — someone else was crucified in his stead, and was mistaken for him. He is still alive, and will appear at the End of Days, when his job will be to slaughter all the remaining unbelievers who have never submitted to Allah.

This is what the ecumenical efforts of the United Muslim-Christian Forum are about. They are sliding their version of Jesus in under the Christian radar. Their smiley-face words will be enough to anesthetize most Christians, and they know very well that almost no non-Muslims will bother to do the research and learn what “Jesus, son of Mary” really means in Islam.

If you’re a Christian, it’s your job is to fill in the gaps. At the very least, buy a copy of the Koran, plus an account of the Traditions intended for a Muslim audience and a treatise on Islamic law. Study them carefully. Discuss them at church-related events.

Steel yourself against the inevitable accusations of “intolerance”, “bigotry”, and “racism”.