Our Dutch correspondent Bolleke sends his translation (with interpolated commentary) of an article from today’s De Telegraaf about what he calls a “fundamentalist bitch fight in the Netherlands”: 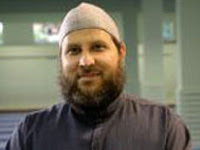 Imam Sheikh Fawaz Jneid [known hate beard] has attacked Shariah4Holland, the new Muslim organization that wants to introduce Islamic law in the Netherlands. “Either these young people are mentally insane and irrational, or this is a band of exploiters and criminals that are after bloodshed justified by Islam,” says the imam of The Hague’s as-Sunnah mosque, who asks the authorities in the Netherlands and Belgium to arrest the organization behind Shariah4Holland and Shariah4Belgium.

According to the imam the Muslim organization is a criminal organization or a bunch of crazy people, in any event, the organizers behind it must be incarcerated.

“If these figures actually suffer from mental disorders, then it is a duty to put them away in a mental institution. Otherwise they must be locked in prison,” says Fawaz in a written statement. His words are remarkable, because in the Netherlands preacher Sheikh Fawaz Jneid is known as a radical Muslim, who once in a sermon begged that Theo van Gogh and Ayaan Hirsi Ali would get serious diseases. But even for him the new shariah clubs are too radical [yeah, right!].

“Your actions have nothing to do neither with the Islamic law nor with the jihad. And also your behavior is not of the shariah, nor of the jihad. If you’re so concerned about our brethren in Afghanistan, then fine, go there. May Allah make it easier for you,” says Fawaz cynically.

“You exclaim: ‘we Muslims are coming’, to put the Muslim flag on top of the Royal House. That is aggression and an outright military challenge. You scare people away from Islam. Don’t worry about whether the unbelievers lock you up; if I catch you guys, I’ll beat you up!” warns the imam from The Hague.

The imam calls the shariah clubs a gathering place for criminals. “You guys are not mujahideen. You guys are murderers and scaremongers,” says Fawaz, who reproaches the shariah organizations for wiping out everything for which the Muslims have fought for during their years in Europe. “Tell me, who of the Muslim scholars has given you a fatwa for this error and unrest by which you set the Dutch against us?” asks Jawaz rhetorically in the secret recording. “Abou Imran, you are not even able to establish the Caliphate in Morocco, and you want to do it here in the Netherlands…?”

The PVV is calling for a ban on the Organization Shariah4Holland. The National Coordinator for Counterterrorism (NCTb) says it is aware of the activities, but sees no reason to intervene.

11 thoughts on “Fundamentalist Bitch Fight in The Netherlands”