Over the last few years, we’ve all become familiar with the sight of masses of Muslim men clogging up public spaces in major Western European cities with their posteriors pointed skyward as they pray towards Mecca.

Paris is the most notorious in this regard, although similar occasions have been observed in Switzerland, Germany, Britain, and other countries — even across the Atlantic in front of the U.S. Capitol. To devout Muslims, such actions are well understood as a symbolic occupation of infidel territory, and a preliminary claim of that territory for Islam.

Now the same thing has happened in the Bulgarian city of Pleven. Our Bulgarian correspondent RR sends his translation of this brief note from Posoki about the event:

Libyan tourists held their prayer in the middle of the very central square of Pleven yesterday. Despite the cold and freezing temperatures, the group of youths visiting our country as tourists spread their prayer rugs and performed their regular act of worship…

The journalist goes on to say in a playful tone that the passersby were curious and impressed by the unusual sight. 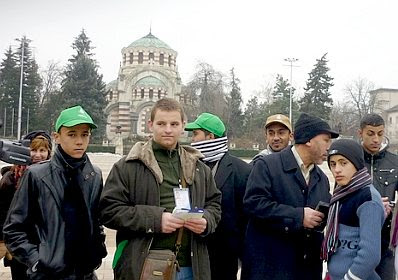 This is a huge memorial building hosting a chapel, dedicated to the Russian and Romanian soldiers who fell for the Liberation of Bulgaria during the Siege of Plevna of 1877. The remains of many of these soldiers are preserved in the mausoleum.

The “Libyan tourist youths” according to the photo in the first link are singing their Allahu akhbar facing this chapel just 50-60 meters away. I know the place very well, as I lived for fifteen years in Pleven.

In short, this “curious event” was in effect a highly symbolic act.

Suffice it to add that organized worship in public places in Bulgaria is regulated, so if a Protestant group, a Catholic parish, or even an Orthodox priest (the traditional denomination) plan some public ceremony or prayers, they are required to have permission from the local mayor.

But — when the powerful nations of Great Britain, France, and Germany tolerate the Muslim conquest symbolically sealed by the “faithful” occupying public places, what remains to a nation of seven million in the backyard of Europe? Submit and relax…

This report from Posrednik News is fuller and suggests there was some response from some local councilors. Again, translated by RR:

A group of about 30 Libyan youths has produced some upheaval among the citizens of Pleven on Thursday. In the early afternoon hours the tourists decided to organize a football play… on the central square of the city! The sports activity, however unusual for that place, was not the main shocking event. The group prayer in front of the Ossuary Chapel was the act that provoked uneasiness about the tourists. Their worship was noticed by the city councilors Liubomir Petkov and Ivailo Atanassov, who felt obliged to inquire whether the Libyans have a permission from the City Council for such public religious proceedings? The “youths” explained that they were tourists, on their way through the city, and not knowing where to find a mosque, they went on to fulfill their religious obligations to pray at the exact time just on the spot…. the central city Square. Councilor Petkov explained to them where the mosque is, and that such public activities require permits.

Despite this, the disturbing religious doings on the square went on for more than an hour without any reaction by the state institutions, and in particular, the police…. Councilor Petkov has announced he will organize a press conference to discuss the event, and why the law enforcement institutions remained silent… He stressed he has a tolerant understanding of those youths’ religion, but only if it is practiced according the law of the state.

We ask the City Council and the Mayor — is the central square the proper place for non-sanctioned religious activities? And if it isn’t — why is it that nobody reacted except the two city councilors on their personal behalf? Mr. Petkov announced that when he approached the group, there was a municipal serviceman, who admitted he is unprepared and unaware how to proceed with the “tourists”, who were giving interviews to the media along with observing their prayers…

A final note from RR:

So — in addition to my previous brief notes, this was certainly an organized action of propaganda. The temperature at that time was about zero in Pleven, and to imagine “Libyan youth tourists” enjoying an improvised football game and prayer in the freezing cold is highly unusual. Just as unusual is the very presence of the 30 (judging by the photo, maybe 40) “youths”. Pleven in winter has never been a tourist destination for young Arabs.

There is a more detailed article (in Bulgarian) about these events in Darik News.

15 thoughts on “First We Take Paris, Then We Take Pleven”