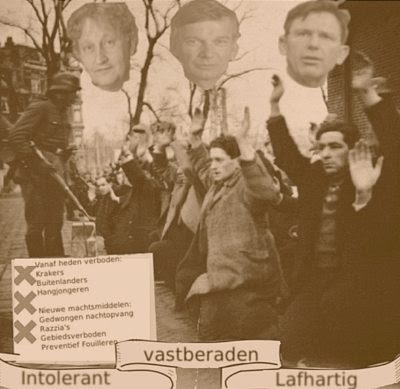 It is a time-hallowed practice of the Socialist Left to equate any action they don’t like — for example, a cut in social welfare, a tightening of immigration laws, or the deportation of immigrant criminals — with Nazism. A recent instance of this rhetorical gambit has popped up in Amsterdam, and concerns the eviction of squatters by the municipal authorities.

Our Flemish correspondent VH has translated an article on the topic and follows it with additional material and notes. First, from Elsevier:

Amsterdam and CIDI furious after razzia poster by squatters

[December 3, 2010] Squatters have put together a poster in which they insinuate that the eviction of squatters from squatted property is equivalent to the razzias[1] in WWII. The municipality of Amsterdam and CIDI (Center for Documentation and Information Israel) are furious. The poster can be seen on the Indymedia website, an online platform for squatters.

In the manipulated picture, Jewish men are kneeling with their hands in the air under the watchful eye of a soldier. This is a photo taken during World War II. At the top of the razzia poster, the portraits are added [from left to right — translator] of Amsterdam’s mayor Eberhard van der Laan [PvdA, Labour Party, Socialist], chief prosecutor Herman Bolhaar, and chief of Amsterdam Police Bernard Welten.

On Twitter, Aldermen Lodewijk Asscher [of the PvdA, Labour Party, Socialist] and Eric van der Burg [of the VVD, center-right liberals] speak of it as a “revolting action” to compare the squatters to Jewish war victims. Mayor Van der Laan also describes the poster as below standards.

In addition to this, the Center for Information and Documentation Israel (CIDI) finds the poster shameful. “The men in the pictures were taken from their homes in during WWII and gassed, that has nothing to do with the policy of the municipality,” a spokesman for the CIDI told the Amsterdam broadcaster AT5.

Whether a complaint has been filed against Indymedia is not yet known.

The squatters themselves however, say the poster has nothing to do with the squatters, but “the daily hunt for undocumented migrants”.

Statement by The Handyman

We’ve made this “photo-f***”[2] poster, because we find it shocking that Amsterdam, headed by the Triangle [mayor, prosecutor, police chief — translator], finds it normal to execute vulgar (as smelling of the second world war) razzias in Amsterdam.

This past week this happened in Amsterdam-East. The previous major action was in Amsterdam South-East. [link]

It is too sad for words that these kinds of filthy practices by the coppers are becoming commonplace. Stop and search, area-prohibition to drive teenagers from the street, surveillance cameras, heavy repression during student protests, the football-law [against hooligan-violence — translator] being used against youngsters who hang around on the streets, and so on.

Preventive stop-and-search often results in complaints and concerns about the fact that people with a tint other than pink are checked and caught more frequently. Never has anything been done against this.

These practices will bring us to the conclusion, by means of a so-called photo-f***, to draw attention in a very rough way to the misconduct of the state. We believe Amsterdam has lately become a police-city with the law-and-order mayor at the helm.

The photo-f*** has nothing to do with squatters. However, squatters have also been declared prohibited since October 1;[3] this target group is often articulate and combative enough to respond. The daily hunt for undocumented migrants is a very different kind of struggle. This target group is one of the most vulnerable in society. It is therefore necessary that other groups in society engage in the struggle against the fascist practices of the IND [Immigration and Naturalization Service — translator] and the police corps Amsterdam-Amstelland, and to begin the discussion at this point.

For years groups have made efforts to call for attention to the absurd policy of the Amsterdam police against undocumented migrants. Apparently it is necessary to make a very hefty photo-f*** to ask attention for this.

3 thoughts on “Squatters and Razzias”