Our Perth correspondent Anne-Kit sends this tale of extreme enrichment from her local daily, The West Australian. The article is not available online, so she kindly transcribed it from the print edition of the paper.

She includes this note:

This story has a Mohammed Coefficient of 100%, and I’ll bet my next salary that this would not even be a news story had the perpetrator been Fred Smith, white Aussie battler. He certainly would not be in line for getting his licence back!

Banned taxi driver may be able to work again 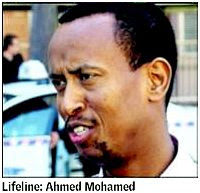 A Queens Park father of seven banned as a taxi driver because of his infringement-riddled traffic record has been thrown a lifeline by the Supreme Court that could have him back behind the wheel.

The Department of Transport cancelled Ahmed Sheikh Mohamed’s taxi licence last December because of the “number or nature of convictions for offences under the Road Traffic Act”. The State Administrative Tribunal upheld the decision after an appeal.

Mr Mohamed, who was a taxi driver for eight years after moving from Africa, said he was struggling to provide for his big family and could not find work because he had only one arm.

The tribunal judgment said Mr Mohamed had 36 demerit points over four years from 16 separate incidents, 12 of which were while he was on duty.

There were eight incidents of speeding, two of making illegal U-turns and one each of running a red light and a stop sign.

Mr Mohamed, 32, claimed he was a good driver, arguing his road indiscretions were “minor” and he knew of other taxi drivers with worse traffic records than his.

He refused to comment on passenger complaints outlined in the SAT judgment, which he called “prejudiced”.

But Mr de Villiers’ ruling said the complaints from 2006 to 2008 included Mr Mohamed being fined $200 for “making suggestive comments” to a female passenger and “touching her”, as well as claims he appeared drunk behind the wheel and fell asleep at traffic lights.

But it was noted in the ruling that none of the complaints led to a criminal conviction and only one resulted in a fine.

Justice Allanson ruled the tribunal did not recognize the difference between an infringement and a conviction, misunderstood the meaning of “good character” and gave too much weight to the opinion of an occupational psychologist.

It’ll be a good thing if Mr. Mohamed gets his license back, because he’s got seven kids. Who do you think will be supporting them if he can’t drive that cab with his one arm?

Face it, Aussies: he’ll either be on your roads, or in your wallets. Those are the only choices you get.

6 thoughts on “Make Way for Mohamed”