The following article about Elisabeth Sabaditsch-Wolff appeared today in the print edition of Wienerin , a glossy Austrian magazine. I have no idea what the magazine’s politics are, but based on the cover images displayed on its website, it seems to be an Austrian version of Vanity Fair. If so, this article is a remarkably even-handed view of Elisabeth and her case.

She is said to have incited hate against Muslims, and is before the court on a charge of incitement. But even a conviction will not silence Elisabeth Sabaditsch-Wolff. S. M. Steinitz accompanied the new figurehead of the Islam critics to Copenhagen. And witnessed how Sabaditsch-Wolff made her trial a manifesto — and gained in political influence. 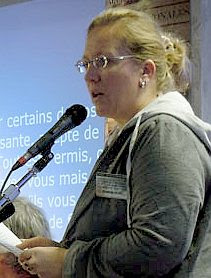 The prosecutor apparently did not consider it necessary to prepare for the trial. No, he said, he had no questions for the defendant. The tape recording of her comments, the basis for the charge against Elisabeth Sabaditsch-Wolff, 39, he had only heard “in excerpts.” On this tape, covertly recorded by a reporter in the fall of 2009, can be heard how Sabaditsch-Wolff — during her seminar “the Fundamentals of Islam” — says to a participant, among other things,: “Cardinals rape in spite of their religion. Muslims rape because of their religion.” Sponsor of the seminar: the Freedom Education Institute. A charge was laid after a report appeared in the weekly magazine, NEWS.

A year later in Room 31 of the Viennese Regional Court: the prosecutor seems confident of success, almost bored. Even the onlookers do not doubt that a verdict will be reached quickly: Sabaditsch-Wolff — guilty of incitement and denigration of religious doctrines. Like Susanne Winter, that FPÖ representative who was convicted two years ago because of her comments about the founder of Islam. (“In today’s system, this Mohammed is a child molester.”)

But it was different this time.

Defense attorney, Dr. Michael Rami, turns to Judge Bettina Neubauer: “Your Honor, today it is not Mrs. Sabaditsch-Wolff, but freedom of expression that is on trial.” At first, Neubauer acts unimpressed. What did Sabaditsch-Wolff mean when she said that about rape, she wants to know. “When a Muslim marries a nine-year old,” says the defendant, “he can invoke Islam, which allows him to do that.” “How do you conclude something like that?” asks the judge. “Muslims are supposed to emulate the Prophet in all things,” is Sabaditsch-Wolff’s answer. “That is what it says in the Koran.” She holds up a copy of the Muslim holy book. “And because Mohammed married a six-year old, Muslims, in Yemen among other places, still assume the right to marry and abuse children.” She gives the judge a penetrating look. “I have a six-year old daughter. I do not want something like that to happen to her.” Neubauer asks matter-of-factly: “Why should that happen?” “Because Europe is under threat of Islamization,” says Sabaditsch-Wolff… I give my seminar to inform and warn people.” “What do you think you call forth with such statements, if not hate?” asks the judge, who was already somewhat unnerved. “I do not create hate,” replies the defendant calmly. “Reading the Koran causes far more hate than my seminars.” The trial is adjourned.

The charge of incitement is the high point of her career as a provocateur thus far. Elisabeth Sabaditsch-Wolff devotes up to ten hours a day to her campaign, prepares speeches and seminars, confers by e-mail and skype with allies all over the world. A look at her life history could offer an answer to the Why: As the daughter of an Austrian diplomat, she experienced, at age six, the takeover of the ayatollahs in Iran. “These shouting figures in their black robes, the palpable fear of the religious police in the streets — all that unsettled me greatly.” Years later, she was working in the Austrian embassy in Kuwait when Iraqi troops marched in. The embassy employees became hostages of Saddam, and were allowed to leave the country only after weeks of diplomatic negotiations. Sabaditsch-Wolff treated the trauma of her captivity in the book “I Was Saddam’s Hostage.”

Later she returned to Kuwait, then worked in Libya after that. “Life in Islamic countries is terrible,” she maintains. “… And the Muslims are the first victims of this ideology. They should be freed from their religion.” Does she really believe that Islamization is threatening Europe? “It is already fully underway. And if we do nothing, Europe will go under.”

Copenhagen, a few days later. Elisabeth Sabaditsch-Wolff, invited by the Free Press Society to a conference in the Danish parliament on the topic “Freedom of Expression,” was introduced as a “martyr for freedom of speech.” The guest list reads like the Who’s Who of European rightist parties: Jimmie Åkesson, head of the Sweden Democrats, who this year managed to enter the Swedish parliament with a controversial ad (burka-wearing women with baby carriages scaring an old woman off of welfare support). Peter Skaarup, foreign policy spokesman for the Danish People’s Party, is also there. Then too, René Stadtkewitz, founder of the German party Die Freiheit, modeled on the example of Geert Wilders’ Netherlands party of the same name [in Dutch]. He also intended to come, but had to cancel, at the last minute. “He is watching my trial with great interest,” says Elisabeth Sabaditsch-Wolff, who had met Wilders in Berlin in October. “He himself is accused of incitement. It’s crazy how many of us they want to get.”

She is greeted as a friend by the politicians. The paying public too, which has come to see Sabaditsch-Wolff live, is happy. “I know you from the internet. You are Elisabeth from Austria,” says an elderly lady. “You are a heroine!” shouts another. “Elisabeth from Austria” is a web celebrity. On more than forty connected websites she is celebrated as a “free speech advocate,” as a “fighter for freedom of speech.” On the website set up especially for her — savefreespeech.org — donations are requested, for her trial, which she will pursue “if it is necessary, all the way to The European Court of Justice.”

In today’s speech, Elisabeth Sabaditsch-Wolff offers a glimpse of her agenda: Up until now, Europe has had no political leaders who would show the way against Islamization. “However, several are already on the scene and one day they will be the true leaders of individual European nations,” she says and nods in the direction of Åkesson, Stadtkewitz and company. “Our time is now!” she cries into the room, and the people leap to their feet. Standing ovation. A few handkerchiefs are even pulled out. She has done it again. “Those are the best moments.” says Elisabeth Sabaditsch-Wolff later, “when I stand there and feel the people’s enthusiasm. That gives me incredible power.” Does she want to go into politics sometime? “No, I don’t want that,” she says. “I can accomplish more where I am now.”

Two gentlemen are following the event with interest: FP Ö dinosaur Hilmar Kabas and city councilman David Lasar have come to tie their party more firmly to the network of the new European right. An alliance which is visibly moving their views on Islam into the mainstream. Recently, support is even coming from Israel. Representatives of the ultra-rightists who would like to continue the settlements on the West Bank rather now than later, are looking for support for their plans in Europe. And they get this from Strache & Company, who for their part, want to wash off the Nazi smell that still clings to them, by means of emphatic friendship with Israel.

The common “enemy, “ Islam,” unites them all. And so, at the beginning of December, the Israeli politician, Eliezer Cohen, leads Messrs. Strache, Dewinter and Stadtkewitz through the West Bank. Also there: Elisabeth Sabaditsch-Wolff, personally invited by the organizers. Her speech to the political greats of Israel — including Vice Minister Ayoub Kara of the ruling party , Likud — is favorably received. “Islam is a threat for Europe,” she says. And that Israel is “an oasis of civilization in a desert of barbarism.” Applause. Following on, Strache introduces her: “This woman is politically persecuted, She says what you say about Islam. But in Austria she is brought to court because of that.” The Israeli Ultras are indignant.

The career of Elisabeth Sabaditsch-Wolff continues. Next, she and Strache are invited to a series of speeches in Canada. And the spear tip of the USA rightist conservatives, Sarah Palin, has already become interested in the troop. “I appreciate your work,” she sends a message, “and I look forward to meeting you soon.” “Global politics are being pursued,” Elisabeth Sabaditsch-Wolff declares. Astounded follow-up: “And I am right in the middle of it.”

Shooting Yourself in the Foot

The prosecutor in the Viennese Regional Court does not know all that yet. The trial against Elisabeth Sabaditsch-Wolff could prove to be a mistake. As a “martyr for free speech,” her profile increases and she is far more useful to the new right. “They underestimated me,” she says. “However my trial turns out, it will help our cause.”

This is not the “housewife with an unusual hobby”, as she has been represented until now. More like a wolf in sheep’s clothing. Confronted with this picture, Elisabeth Sabaditsch-Wolff laughs. “The wolf has had a bad image for a long time. Even so, it is a very useful animal: in its territory, the wolf maintains the balance of the species.”

The trial against Elisabeth Sabaditsch-Wolff will continue on January 18, 2011.

6 thoughts on “An Unusual Hobby”