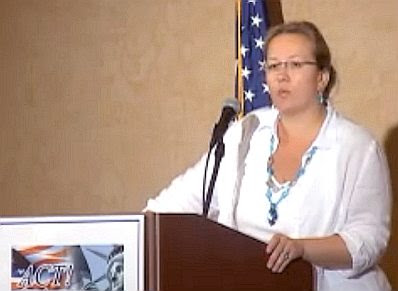 The trial of Elisabeth Sabaditsch-Wolff for “denigrating religious teachings” begins today in Vienna. For those who are unfamiliar with the case, see the list of previous articles at the bottom of this post. This post will stay on top for a while, and updated as required. Later material will be added at the top.

This is an historic moment. Those who are not paying attention now will wish they had in years to come. The Bard’s words are fitting:

And gentlemen in England now a-bed
Shall think themselves accurs’d they were not here,
And hold their manhoods cheap whiles any speaks
That fought with us upon Saint Crispin’s day.

Note: The times given here are Helsinki time, which is an hour later than the time in Vienna. They are seven hours later than EST.

Final update 14:34 (7:34am EST): The remainder of the hearing has been postponed until January 18th, so it seems that Elisabeth’s ordeal will be dragged out for at least several more months. Those of you who are religious, please pray for her.

Below is Henrik’s final report for the day:

The NEWS journalist Dolna was called as witness. Technicalities of her recording equipment were discussed by the judge, including the fact that of the first seminar, only half an hour was recorded.

The judge inquired about some of the statements quoted being from breaks, not from the seminar proper. Only three to four persons heard those, not 32 or more, the criterion for a statement being “public”. This is important for legal reasons, as only statements made to a large group can be punishable.

The judge dug further into the methods of the journalist. Why did the journalist quote statements made in the breaks, not part of the lecture? The journalists says “For journalistic reasons”. Also for dramaturgic reasons, that it makes for a more dramatic and catching article.

Further, the judge asked if it was made clear in advance that the journalist would be recording the seminars. She responded that she had not told anyone, as her work constituted “investigative journalism”, a journalistic tool.

The lawyer probed further into the issue of the quotes being part of the prepared seminar, or offhand comments in the breaks.

Next, the events concerning the opera “Idomeneo” were discussed. The background is that the performance of this classical Mozart piece by Deutsche Oper Berlin, which was cancelled due to Islamic pressure. The director had added decapitation of Buddha, Jesus and Muhammad to the original play. Fear of unrest caused the play to be cancelled. The well-known German magazine Focus had, in that context, written that we should under no circumstances cave in to pressure like this.

This rounded off the day after roughly three hours of hearings. Since there is a need to play the complete recordings (eight hours) from the seminars, the next hearing was scheduled for January 18th.

The proceedings had a serious breach of procedure: The journalist from NEWS.at had not been summoned as a witness, yet was permitted to take the stand. Witnesses are not permitted to be present at the hearings before they are summoned. The defense lawyer will look into possible consequences of this.

This is the end of reporting for today. Please join us on January 18th 2011 for more news from the frontiers of defending the free societies of the West.

Live-blogging of the trial of Elisabeth Sabaditsch-Wolff will resume on January 18th. In the meantime, I ask everyone to please publicize her case. We need to light a fire under the fundaments of the Austrian oligarchs who brought about this travesty of “justice”.

Update 13:54 (6:54am EST): The hearing was adjourned for the day at 12:08 local time. The afternoon session was skipped, because they will have to play the whole tape, which will take extra sessions.

A photo, courtesy of SOS Heimat:

Henrik will have a final report on this morning’s session.

Live-blogging in German at SOS Heimat.

Update 12:40 (5:40am EST): The lawyer continues to ask Elisabeth to explain various statements:

Elisabeth explains polygamy in Islam, and the fact that this is a reality in Europe, today.

Elisabeth finally tells about the First Amendment of the US Constitution, the absolute right to express ones’ opinions, as a fundamental prerequisite for a sound democracy.

At this point, more people have arrived. There are 18 seats for the audience, 30-35 listeners total.

Update 12:06 (5:06am EST): The significant event at this point of the trial is the unwrapping of ’Umdat al-salik wa ’uddat al-nasik, or The reliance of the traveller and tools of the worshipper. It is commonly referred to as Reliance of the Traveller when cited in English.

They are using the Revised Edition (published 1991, revised 1994), which is “The Classic Manual of Islamic Sacred Law ’Umdat al-Salik by Ahmad ibn Naqib al-Misri (d. 769/1368) in Arabic with Facing English Text, Commentary, and Appendices”, edited and translated by Nuh Ha Mim Keller. This an authoritative source on Sunni Islamic law, because it is certified as such by Al-Azhar University in Cairo.

The defense lawyer goes through some points of the charges, asking Elisabeth:

The defense lawyer explains the death threats against Ayaan Hirsi Ali and the security she needs to live under.

Elisabeth tells about the killing of Theo van Gogh, and the Quran quotes used to justify that.

[The defense lawyer and Elisabeth have explained about the classical Sunni Islamic book Reliance of the Traveller, unwrapping a fresh copy in court.]

4:50 am EST: I just got up, and am catching up with what has been written so far at Tundra Tabloids, which will be mirrored at the Save Free Speech website.

Henrik Ræder Clausen is present at the court, and is communicating with KGS, who is posting all this. Henrik says Austrian TV is outside the courtroom with a camera crew

The room has seats for 15, but 25 spectators are there. ATV and other press asks for comments, but on advice of the lawyer ESW says “No comments now, after the hearings”.

The judge informs ESW about her rights, that all she says can be used against her.

The public prosecutor makes a short summary of various conclusions from ESW, taken out of the context from eight hours of lectures. Without the context, they sound ominous, like speaking of a “Burqa ghost”, comparing her statements to those of Susanne Winter, mentioning that Muhammad married a child of six, as well as the risk that we will eventually have a civil war.

The defense lawyer speaks of the principles of gender equality, freedom of religion, and the lack of reciprocity that exists in Islam, for example that other religions cannot be freely exercised in several Islamic countries. That ESW grew up in Islamic countries and has experienced the situation of women there directly.

He continues to explain that the statements mentioned were taken seriously out of context, and that some were not public, and thus not relevant to the case. And that we should play the eight hours of recordings to understand the context.

He proceeds to invoke three expert witnesses who will testify that ESW speaks the truth:

10:53: The judge inquires if we are talking about Islamic extremism, or of Islam as such?

Elisabeth explains that we are talking Islam as such, as defined by its scripture, and quotes Erdogan that there is no moderate Islam anyway.

The judge accepts that we can play the tapes.

Then proceeds to ask about us being lied to 24 hours a day. Elisabeth explains the concept of Taqiyya. The judge says: “That is your interpretation”, to which Elisabeth responds: “No, this is the canonical interpretation”.

Next question is: “Is Islam in a never-ending war with the West?”

Elisabeth refers to history and newspapers to document that, and that Jihad has at times been considered a pillar of Islam.

Elisabeth took a photo of a woman in a burqa in Meitlinger Hauptstrasse, Vienna, and told about this in her seminars. It is difficult to figure out why the public prosecutor finds this offensive, not to mention illegal. The defense asks about this. Elisabeth explains a few things about freedom for women — all women — to decide for themselves.

A reference is then made to debates at OSCE, where she discussed child molestation, and says: Christian cardinals molest children in conflict with their religion; Muslims in line with theirs. As background the marriage between Muhammad and Aisha is related, as documented by several Hadith authors.

Paedophilia is discussed, in light of Muhammad being the perfect example for Muslims, as stated in Quran 33:21. That means everything Muhammad ever did or said, which is in the hadith.

Elisabeth explains what the hadith collections are, how they constitute an indispensable part of Islam, due to 33:21 and similar suras. And emphasizes that she is not making up statements, merely quoting canonical Islamic scripture.

11:34: The Judge opens a discussion if we’re talking of “All Muslims” here.

Elisabeth says no, for most Muslims do not know what is in the Quran, which is in a language (Arabic) they do not understand, and thus place their confidence in the imams for interpretations.

Then the quote about “Islam is s***” is debated. Elisabeth points out that she was debating, using visual quotes, if it is legal or punishable to say “Islam is s***”. Thus, what we are discussing here is the meta-question:

Is it illegal, or punishable, to debate the legality of saying: “Islam is s***”?

9 thoughts on “The Trial of Elisabeth Sabaditsch-Wolff, Day 1”