Jerry Gordon at the New English Review recently interviewed Elisabeth Sabaditsch-Wolff about her upcoming trial in Vienna on “hate speech” charges. If you are new to Elisabeth’s case, Jerry’s introduction is a good summary of the background on it.

I’ve included the introduction and excerpted part of the interview below. At the bottom of this post is a list of previous articles about Elisabeth’s case. 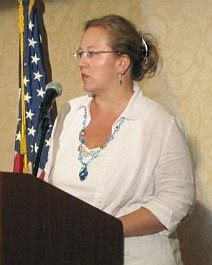 Elisabeth Sabaditsch-Wolff, a Viennese housewife is going before a Kafkaesque Tribunal on November the 23rd for doing something which is legal under our US Constitution, criticizing a religion. That is one of the express purposes of the First Amendment which protects the freedom of speech in America. She had been suborned by a glossy weekly publication NEWS in Austria that sent a journalist into several lectures she gave about Islam, the Sunnah and Sharia, secretly recording them. Then lawyers for the left liberal publication gave the transcripts to the Viennese public prosecutors office as evidence of hate speech against one of the officially recognized religions under Austrian law, Islam. On September 15th charges were filed by the Austrian State against her and a trial before a single female Judge convened to be heard on November 23rd. The burden of proof in that proceeding rests solely on how Sabaditsch-Wolff and her talented counsel present her case. What the Austrian publication NEWS, the cabal of leftist allies of Austrian Muslims, and the Vienna Public Prosecutors Office realize is that they will be facing a formidable opponent, who will do her best to put Islam on trial in the proceeding. Sabaditsch-Wolff is not an ordinary Viennese housewife. She is the daughter of an Austrian diplomat who spent time in several Muslim countries, including Iran, Kuwait and Libya. She learned firsthand as a child of six the horrors of the Islamic Revolution in Tehran when Ayatollah Khomeini deposed the Shah’s regime. She was in Kuwait when Saddam Hussein invaded in 1990 and was evacuated to safety. She returned to Kuwait in the late 1990’s and learned what Sharia and Islamic doctrine mean in a Muslim country. She was in Libya on 9/11 and encountered evidence of Islamic anti-Semitism. Her travels with her diplomatic family also took them to Chicago for a consular posting during which time she learned the principles of our US Constitution and precious First Amendment free speech rights as a teenager. Her motivation for being the ‘local hero’ in Austria is as much protection of her six year old daughter’s future as it is arousing her fellow countrymen to understand the threat to their future from accommodation of Islamic doctrine and Sharia.

We were fortunate to have interviewed Ms. Sabaditsch-Wolff just prior to her November 23rd trial.

Read the rest at the New English Review.