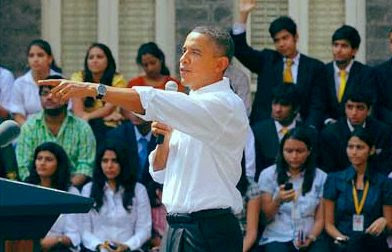 President Obama held a “town hall” event today at St. Xavier College in Mumbai as a part of his much-ballyhooed visit to India. After speaking for a while to the students, Mr. Obama took a few questions from the audience.

The first question took me by surprise — hadn’t the president’s staff screened his potential questioners carefully? And I thought at first that Mr. Obama must have been surprised by it, too. But as he slid smoothly into such an eloquently delivered response, it became apparent that he was quite prepared for the topic, and delivered a well-oiled spiel on jihad that could have been cribbed directly from Imam Rauf’s briefing book.

Here’s what the young lady asked Barack Hussein Obama, as recorded in the White House transcript:

Hi, good day, sir. Hi, my name is Anna and I’m from St. Davis College. My question to you is, what is your take on opinion about jihad, or jihadi? Whatever is your opinion, what do you think of them?

Now let’s take a close look at President Obama’s answer, bearing in mind the lessons we have learned over the last few years about taqiyya as it is practiced by the Muslim Brotherhood’s agents planted in the West:

Well, the phrase [sic] jihad has a lot of meanings within Islam and is subject to a lot of different interpretations.

This is always the first line of defense about jihad. There are many interpretations: it really means an “inner struggle”, and violent jihad is a fringe interpretation, etc., etc.

But this is not true. As Hans Jansen pointed out in his expert testimony at Geert Wilders’ trial, a consensus of the scholars — the Muslim legal experts and jurists who defined the precise meaning of Islamic legal terms a millennium ago — holds that jihad means waging war against the unbeliever until he converts, is killed, or accepts second-class status under the supremacy of Islam.

The only time when jihad means anything else is when fork-tongued dissemblers like Tariq Ramadan perpetrate their hoaxes on gullible Westerners.

But I will say that, first, Islam is one of the world’s great religions.

And more than a billion people who practice Islam, the overwhelming majority view their obligations to their religion as ones that reaffirm peace and justice and fairness and tolerance.

Yes, this is true. But these four words have different meanings to Muslims than they do to other speakers of English:

I think all of us recognize that this great religion in the hands of a few extremists has been distorted to justify violence towards innocent people that is never justified.

Once again, this is precisely true: Islam forbids violence against innocent people. The trick here is the Islamic definition of the word “innocent”. No one can be considered innocent unless he has declared his submission to the law of Allah. Therefore non-Muslims are never “innocent”, and may be killed with impunity.

It’s in the Koran.

Notice also the “tiny minority” fallacy, which has been described previously in this space by both El Inglés and Pike Bishop.

Murderously violent people are always a tiny minority of any population. Among the world’s Muslims, even one-tenth of one percent is a huge number of people. Are we required to accept death at their hands because there are only a million of them?

And so I think one of the challenges that we face is how do we isolate those who have these distorted notions of religious war and reaffirm those who see faiths of all sorts — whether you are a Hindu or a Muslim or a Christian or a Jew or any other religion, or your [sic] don’t practice a religion — that we can all treat each other with respect and mutual dignity… that those are what we’re living up to, as we live in a nation or nations that have very diverse religious beliefs.

Who has a “distorted notion of religious war”? And what happens to “diverse religious beliefs” under an Islamic regime?

“Diversity” under those circumstances mean that Christians and Jews may be (at most) tolerated if they pay the tax and live as second-class citizens, recognizing the supremacy of Islam. But Hindus are considered vile idolaters, and will not be tolerated at all. If Sharia is followed strictly, they may choose conversion or death — those are their choices.

Surely there are some Hindus in India who are familiar with the historical evidence for this fact…?

And that’s a major challenge. It’s a major here in India, but it’s a challenge obviously around the world. And young people like yourselves can make a huge impact in reaffirming that you can be a stronger observer of your faith without putting somebody else down or visiting violence on somebody else.

Who visits violence on whom? Which religion habitually practices violence against all others?

And what is a peacefully-inclined young person to do if his faith or his atheism comes under violent attack from the forces of Islam?

Would President Obama prescribe “dialogue” to answer that “challenge”?

[…] And those circumstances — I think all of us have to fundamentally reject the notion that violence is a way to mediate our differences.

And what happens if some of that violence is directed at us? Are we supposed to non-violently allow a tiny minority of misguided extremists to slit our throats?

Or will you, Barack Hussein Obama, step in and interpose your own body between those who would kill us and their intended victims?

16 thoughts on “Obama Takes the Muslim Brotherhood Line on Jihad”