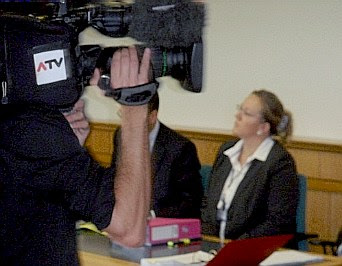 Our Austrian correspondent AMT sent a tip about this essay by Andreas Unterberger, and included this note:

Andreas Unterberger has hit the nail on its head and succinctly analyzed the sad state of affairs in Austria. However, after yesterday’s trial there is some hope that freedom of speech may remain. We should not hold our breaths just yet.

Many thanks to JLH for the translation from Dr. Unterberger’s website:

Freedom in the Dock

Austria is on the path to becoming a totalitarian state. That will be clearer than ever this Tuesday. The justice system is actually prosecuting a woman for making critical statements about Islam.

Seminar lecturer Elisabeth Sabaditsch-Wolff — in the cabinet of Wolfgang Schüssel in the 1990s, and later active at several embassies in the Arab world — will be accused of making Islam-critical statements. Meanwhile, in Austria, for time out of mind, every discriminatory act or word against the Catholic church goes unpunished.

Behind the Sabaditsch trial — even if it should ultimately result in a not-guilty verdict — is of course stupid partisan political calculation: since the comments were made at a Freedom Party function, the belief is that the rise of the FPÖ [Austrian Freedom Party] can be combated in this way. As a next step in consequence of the show trial, the funds allocated for the Freedom Party’s academy can be removed. As the ruling parties have in the meantime decided to do, to the cheers of the Greens.

Almost simultaneously with the bringing of the charge against Sabaditsch-Wolff, probably the most depressing document of postwar Austrian legal history became public: a precise documentation by the longstanding president of the supreme court, Johann Rzeszut, which shows how very much the prosecutor’s office thwarted the pursuit of the accomplice in the kidnapping of Natascha Kumpasch.* A copy of his communication to all parliamentary groups may be found in its entirety in the internet.

It is not new that the Red and Green, in the face of steady electoral losses, are ever more willing to turn from the voting booth to the courtroom. Similarly, every dissident in the countries of Eastern Europe after 1945 was persecuted by the communists through show trials. (Something that the Social Democrats, among others affected by that, should remember). Similarly, with political trials, the Nazis criminalized dissidents by the thousands.

It is just disturbing that a minister of the ÖVP has also given permission for such a thought trial. Which, to be sure, merely confirms current judgements on the intelligence and foresight of this minister. Even more disturbing is the fact that not a soul in the ÖVP will stand up and advocate for freedom of expression. At any rate, ÖVP has long been the first party, among the meager Austrian offerings in this regard, to represent the values and convictions of classical liberalism.

In the case of the SPÖ, this kind of tradition came to an end with the departure of Bruno Kreisky. Recall wistfully how patiently he confronted the democracy-hostile and violent stupidities of his own party’s young (whose exponents then ended up with the Greens).

Even if Sabaditsch-Wolff’s every statement were nonsense, that must not be a cause in a constitutional democracy to bring her to trial. For in other venues too, pure foolishness is spoken, hate-filled theses on class warfare are drummed out, and other similar things.

The condition of justice is also symbolized by the fact that the charge against Sabaditsch-Wolff stems from, of all people, a reporter from the News — that is, from a paper that embodies all the negative aspects in domestic journalism (and happily is suffering from a steady loss of readers).

Naturally, it must not only be allowable to dispute with Islam pointedly and critically — it is urgently necessary. Anyway, the sacred books of Islam designate unbelievers — that is all others — as “worse than animals.”

Sabaditsch-Wolff, to her credit, has revealed many abuses that have arisen because of the advance of Islam: public swimming pools closed to non-Muslim women; kindergartens that no longer serve pork; girls who are not allowed to ski. And everyone who cares about the future of Europe must deal with the fact that most terrorists on earth have an Islamic motivation; that in all countries where it is in the majority Islam means restriction of human rights; that critics of Islam are exposed to threats and real mortal danger worldwide and for years on end; that Muslims from Pakistan to Egypt carry out bloody persecutions of Christians.

Austrian jurisprudence is walking in the footsteps of that of the Netherlands, which has likewise allowed leftist radicals to use criminal trials to badger critics of Islam.

The most prominent example is electoral winner Geert Wilders. In the Wilders trial, a judge even tried to secretly influence an expert witness against the defendant. To be sure, there are independent instances which show the judge to be biased and have caused the trial to start over from the beginning. Especially scurrilous in the Wilders trial is the fact that even the prosecution has for a long time been requesting a dismissal that Wilders be set free. (He had compared the Koran with Mein Kampf.)

In our case. however, Claudia Bandion-Ortner’s prosecuting attorneys are on the rampage.

By contrast, a shocking poll by an institute for research into youth culture (close to the SPÖ) taken among Arab and Turkish young people living in Vienna is being shelved immediately. 45% believe that Jews have too much influence on the world economy and 37.9% believe that Hitler did “a lot of good” for people. This is being ignored while criticism of Islam is being punished with imprisonment. Indeed, the young Muslims in great majority are choosing “correctly.”

In Germany, on the contrary, there are still courageous politicians, who point out the problems connected with Islam. Wolfgang Bosbach (CDU), chair of the domestic affairs committee, has pointed out that religions can supply motives for violence and this is the case with Islam rather than with Christianity. The German family minister, Kristina Schröder, confirms — like the German philologists’ association — a growing hostility to Germans among Muslim youth. She advocates severe punishments up to expulsion of criminal and integration-resistant young people. She dares to say, “There are mosques where values are transmitted that clearly do not belong on the foundation of our constitution.”

Really, the Austrian media should quickly grasp the fact that the steady constriction of freedom of expression impacts the media above all. They could learn from an impressive example from, of all places, Bolivia. As protest against a new anti-racism law, the large newspapers there appeared for a full day with an almost blank front page. The only text read: “There is no democracy without freedom of expression.” The newspapers fear that the law could be used as a pretext for closing newspapers for spreading or justifying racism.

Apparently, Bolivian journalists are smarter than ours. And braver.

Finally, it is not just about Sabaditsch, but about recalling our most central basic values. It is about our central demand: Hands off freedom of expression!

Otherwise, soon, as now in many lands, every Turk who denies the genocide against the Armenians will have to appear in court. And every US citizen who denies the genocide against the Indians. Every Muslim who treats homosexuals as inferior. Every Frenchman who glorifies the war-starter Napoleon. Every Protestant who denigrates the Catholic Church. Every Catholic priest who, like a Belgian bishop recently, calls AIDS “immanent justice.” Or every leftist demonstrator against pro-lifers who carries a sign like “If Mary had aborted, we would not have to put up with you.”

None of them comprehend that with Sabaditsch-Wolff their own freedom of expression is threatened. Certainly these questions can be commented on intensively and passionately. However, a constitutional democracy can only function if everyone can debate every question in complete freedom. With ever so stupid and ever so obnoxious as well as ever so clever pronouncements. If this freedom of expression is taken away, then the move toward totalitarianism can longer be held back.

Should it happen in the future that only comments from a particular political direction are punished, then we are no longer on the way to totalitarianism. We arrived long ago.

3 thoughts on “Freedom in the Dock”