Below is a fascinating essay by Olavo de Carvalho about René Guénon and Frithjof Schuon. The article was originally published in Jornal do Brasil, and was translated from the Portuguese by Alessandro Cota and Bruno Mori for the author’s website.

I admit to an unfamiliarity with Guénon and Schuon, but from browsing the online information about the two men, it seems that they would probably have been labeled Theosophists if they had lived in the Anglosphere.

Discreet influences
by Olavo de Carvalho
Jornal do Brasil, May 8, 2008 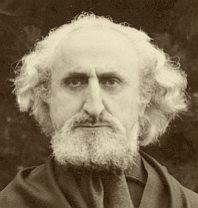 When the Swiss painter and poet Frithjof Schuon (1907—1998) returned from the East in the forties, transfigured into the supreme master of one of the most influential Muslim esoteric organizations and announcing that he would Islamize Europe, he gave the clear impression of being completely mad. Today it behooves us to examine with humility his words and the course of his actions, whose overwhelming efficiency contrasts with the total discretion with which they were undertaken.

To begin with, the creation of Schuon’s tariqah (Islamic initiation lodge) in Lausanne was hailed by the esoteric writer René Guénon (1886—1951) as the only promising result of his own efforts of four decades. This clearly shows the meaning of those efforts and, the later rupture between Guénon and Schuon notwithstanding, evinces the perfect continuity of the work of these two esoterists, whose respective disciples nowadays prefer hating one another to celebrating the common victory over a spiritually weakened Europe.

Guénon, the author of masterly analyses of the decay of the European West, had concluded in the 1920s that only three roads offered themselves to this civilization: the fall into barbarism, the restoration of the Catholic Church, or Islamization. On uttering those words about Frithjof Schuon, he had already given up the second alternative. The fiasco of the Second Vatican Council, whose appearances the popes have in vain been trying to save, proved in the end that his diagnosis was, in outline, correct.

The radically de-Christianized Europe is today the stage of an open strife between barbarism and Islamism. There is no third way, apparently (“secular civilization” is a joke). The possibility of rescuing the Christian option depends entirely on the American influence or on the admirable dedication of Eastern and African priests and pastors, who, in a paradoxical turn of history, have come to try to recatechize the people by whom they were Christianized.

The action of such characters as Guénon and Schuon goes unnoticed by the media, political analysts, and “intellectuals” in general, whose eyes are hypnotically fixed upon the garish surface of events. But without it the “occupation from within” by means of immigration would have remained innocuous for lack of the cultural conditions that disarmed the European intellectual and political elite. Guénon and Schuon contributed much to create them, subjugating the uppermost and most circumspect strata of this elite to the intellectual superiority of the East in every decisive area except the natural sciences and technology.

Guénon wrote his first articles under the pseudonym Sphynx, denoting that his readers had no choice but to profit from his lessons intelligently or to let themselves be dominated without ever understanding them. In a single European country those lessons have been meditated with serious intent by independent thinkers: Romania. When I lived in Bucharest, I found there not a single eminent intellectual who did not have a profound and critical understanding of Guénon’s work.

What has been seen in the rest of Europe is the oscillation between obtuse rejection and devout submission, including a significant number of secret conversions to Islam and the regimentation of many intellectuals and leaders—among them the prospective king of England—into the scheme of state protection of Islamic expansionism. It is no coincidence that Romania is one of the rare European countries where the Muslim penetration is negligible.

To give an idea of how powerful the subtle influence of Guénon and Schuon has been, it suffices to inform that the latter interfered directly in producing the crisis between Monsignor Lefèvre and the Vatican in 1976, and until now the Catholic historians—whether progressive or conservative—have not taken the slightest notice of that.

I know that this article of mine is addressed to few readers and that, among these, some of those who can more or less understand it will definitely hate it. But there are things that one must say just in order not to be accused, in the future, of bearing witness only too late.