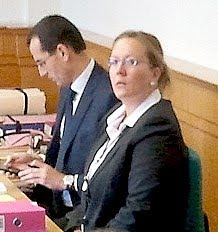 In this morning’s live-blogging report on Elisabeth Sabaditsch-Wolff’s “hate speech” trial in Austria, we mentioned that Robert Spencer was one of the potential expert witnesses who might be called when the trial resumes in January. Elisabeth herself also mentioned Mr. Spencer’s offer of help during her interview last week in the New English Review, excerpts from which were reposted here.

That appears to have changed: Elisabeth says Mr. Spencer has withdrawn his offer of assistance as an expert witness. While this news is dismaying, it is fortunate that Prof. Hans Jansen and Wafa Sultan are both still willing to appear on her behalf. Professor Jansen is Dutch, and assisted Geert Wilders at the latter’s recent trial. Prof. Jansen is one of the foremost Arabists in the world. Wafa Sultan, originally from Syria but now living in America, is a Muslim apostate. She is a psychiatrist specializing in the tyranny of the theological and political ramifications of Islam.

In other words, Elisabeth has excellent, expert witnesses who can stand by her during the coming ordeal of her trial. Nonetheless, the absence of Mr. Spencer is a keenly felt setback. No one can take Mr. Spencer’s place when it comes to speaking eloquently about the danger of Islam.

I have been privileged to hear Mr. Spencer speak twice, both times in October 2007. The first occasion was in Antwerp, where he gave a talk to a gathering of Vlaams Belang members. His presentation impressed everyone. He spoke again two days later at the Counterjihad Brussels conference. Both lectures were lucid and inspiring.

Mr. Spencer’s work, his wisdom, and his ability to respond to those who promote Islam as a “Religion of Peace” have earned him a unique place as a leader in the Counterjihad. Come January, his knowledge and eloquence will be sorely missed in Vienna.