An EDL protester was recently fined £200 for “making offensive comments about Allah” during a demonstration in Leicester. Even though police officers and the EDL were the only ones able to hear what he said, the prosecution said people were “likely to be offended” and the police were “likely to have been alarmed”. His words were considered “threatening, abusive or insulting” and likely to cause “harassment, alarm or distress”.

The convicted man said he did not think he would offend anyone.

But suppose he had intended offense? Why is that a legal issue?

Why is offending someone the sole basis for prosecution in countries that supposedly uphold civil liberties for their citizens?

Vlad Tepes and I discussed the issue for a while and devised the following response: 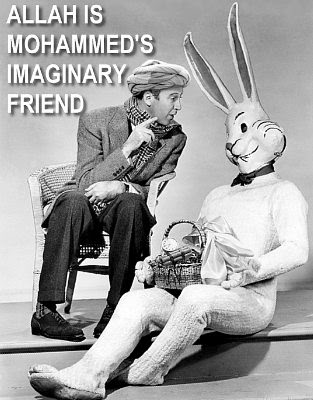 This became a Vlad-Baron joint venture, with Vlad doing the video and the talking, and me doing the image and the spelling — a win-win for everyone.

We are launching a new protest campaign that aims to drive a wedge into the thin crack between leftists and the Muslims.

We’re going to do this with this image [point at it], and the slogan: “Allah is Mohammed’s Imaginary Friend”.

We aim for protesters to get arrested for having a picture that shows Mohammed talking to a giant bunny.

In fact, participants must insist on being arrested, and on being tried.

By doing this we proclaim our fundamental rights, which were not granted to us, but were always ours, and are only now being taken away by the tyranny of state power.

We will go to jail for saying that Allah is imaginary.

We will say nothing about Muslims being violent.

We will say nothing insulting at all, only that their god is imaginary. If someone chooses to be insulted by this, that is his decision.

Any atheist has the right to say what we say. It is one of our fundamental freedoms.

Vlad suggests that people download the image from his site and make T-shirts for themselves and friends, for placards, signs, posters, etc.

At demonstrations, participants should chant the slogan while waving a card or sign.

And everyone should stick to the slogan, and not be sidetracked into calling Muslims “thugs” and so on, because that just supports the idea that we are evil insulting people.

Stick to message, and go to jail for saying that Allah is imaginary.

Even the most diehard leftists will choke hard when they are forced to condemn us as “racists”.

Muslims will be offended, of course, and that will serve as grounds for our arrest.

This will only serve to emphasize that all speech that does not agree with the Koran and the hadith and the sunna of the prophet is offensive to Muslims, and must be prohibited.

And the fact that our governments prohibit it means that they are enforcing full sharia upon everyone, not just on Muslims.

Which is a violation of our rights, the same rights that our government claims to protect when they arrest us for saying that Allah is Mohammed’s imaginary friend.

Vlad’s video about Allah the Imaginary is below the jump, to foil the Blogger Bug:

17 thoughts on “Allah the Imaginary”