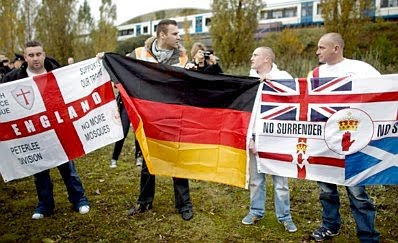 Paul Weston and Elisabeth Sabaditsch-Wolff reported yesterday about what happened to the EDL delegation when it arrived at the train station near Generatorstraat in Amsterdam on its way to the free speech demonstration.

The Dutch police forced the EDL’s rented minivan to travel very slowly through a crowd of “anti-fascist” demonstrators on its way to the venue while the violent Antifas pelted the van with stones and bricks, smashing the windows. The Dutch police told Tommy Robinson and the other passengers that they must proceed the rest of the way on foot — reportedly about 300 yards — while offering them little or no protection from the anarchists who were attacking them.

I spoke on the phone this morning to an EDL source, and can now add a new wrinkle to this story. As Elisabeth mentioned yesterday, members of the Metropolitan Police were present at the demo, and advised the EDL to depart early. My contact has now shed some light on the role played by the British officers in the day’s events.

According to EDL people who were passengers in the minivan, the British police had accompanied the EDL to Amsterdam to offer them what protection they could. When the EDL guys had to abandon their van and run for it, and the Dutch police declined to protect them, the Metropolitan Police beckoned their compatriots over to their own police vehicle and gave them protection while accompanying them the rest of the way to the venue. 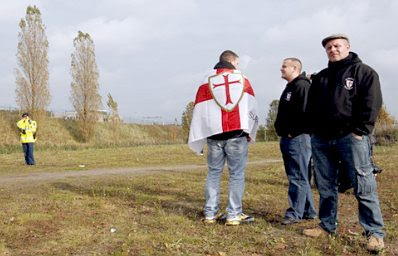 A little while later the British police assessed the situation and determined that it would be very difficult to protect the EDL much longer, given the presence of the violent leftist mob, and the — shall we say — diffident attitude of the Dutch police towards their English visitors. So Tommy Robinson was forced to give an abbreviated version of his speech ahead of schedule, and then the EDL departed.

This report casts the Metropolitan Police in a new light. The London cops, after all, have often been the object of anger and derision on the part of ordinary Britons who oppose the Islamization of their country and are victimized by the police.

But things are not always what they seem, and it appears that the EDL have at least a few friends on the police force — even if those doughty coppers have to travel all the way to Amsterdam to be able to show their true colors.