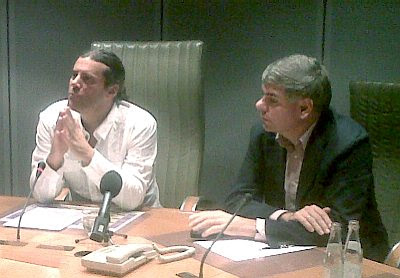 Oskar Freysinger, the leader of the Swiss People’s Party, was invited to speak in Brussels last weekend. The Brussels police (presumably with the prodding of the Socialist mayor) banned Mr. Freysinger from both proposed venues, but the Swiss anti-jihad leader was able to give his lecture at the Flemish Parliament in Brussels with the help of Filip Dewinter, the leader of Vlaams Belang

I know the Flemish Parliament building well: we spent some intensive hours there back in 2007 holding the Counterjihad Brussels conference.

Below is a report on last weekend’s events, as compiled by our Flemish correspondent VH, based on sources in various languages.

Oskar Freysinger was invited by Eubuco to give a lecture in Brussels. The venue was to be the Diamond Center (see 1A, below). This was blocked by the Brussels authorities. Then it was moved to the Crowne Plaza Hotel (see 1B), which was subsequently also blocked by the Brussels authorities (see 2). Finally Oskar Freysinger was able to give his lecture in the Flemish Parliament, on invitation of Filip Dewinter (see 3).

“All that is necessary for the triumph of evil is that good men do nothing.” — Edmund Burke

Conference organized by “EUBOCO”[1] on the topic of “Islam, a threat?” by Oskar Freysinger, National Parliamentarian of the UDC and UDF in Valais, Switzerland

The man who stopped the construction of minarets in Switzerland.

The police of Brussels-Schaerbeek, who administratively are under the acting mayor Cécile JODOGNE, contacted the Diamond Center, and, under pretext of possible disturbances by uncontrollable individuals, ordered the cancellation of the booking for Saturday, October 9th.

If we have really gotten to such a point that the police and the authorities are no longer able to enforce security, and prefer sacrificing freedom, then you will understand that the lecture by Oskar Freysinger is more necessary than ever.

The lecture will be held on Saturday, October 9 at 10:00 (Morning) but it now will take place at the following address:

Oskar Freysinger’s lecture “Islam, a danger?” will be followed by a press conference on the theme “Is freedom of opinion and expression also under threat?”

Do show up, despite this setback!

No conference out of fear for anti-minaret man

[Tuesday, October 5, 2010] BRUSSELS — A conference of the Catholic Association Euboco that was planned for Saturday, October 9, was canceled on the advice of the police and the municipality of Brussels-Schaerbeek. The Catholic Association had invited Oskar Freysinger. This is the man who called for a ban on minarets in Switzerland. He was to give a lecture in Schaerbeek.

The police and the municipality of Schaerbeek did not appreciate this. “We sat down with the manager of the venue,” said Roland Thibault of the Brussels-North police. “We showed him messages of Muslims calling for a demonstration against the appearance of Freysinger. The manager of the venue was not aware of the intentions of those hiring the room.”

The manager called Euboco yesterday afternoon to cancel the conference.

Freysinger made various efforts in recent days to give a lecture in Brussels, but at the instigation of the Brussels city council was refused entry at the Crowne Plaza Hotel and at the Diamond Center. In Switzerland Freysinger organized the referendum against the construction of minarets.

Dewinter then invited him[2] to give his lecture “Islam, a threat?” in the Flemish parliament on Saturday. Some fifty people attended the lecture.

“The Socialist mayor of Brussels muzzles just about anyone with a critical position or Islam, opposes Multiculturalism and the immigration invasion. The Flemish Parliament therefore was a symbolic place for this conference to take place. After all, the freedom of speech in Brussels should be permanently guaranteed,” said Dewinter.