The judges in the Geert Wilders trial will issue their verdict on November 5th. Despite the fact that the prosecutors have asked that Mr. Wilders be acquitted of all the charges, he may well be convicted.

EFI is an umbrella organization, whose member groups include (among others):

In anticipation of the verdict in the Wilders case, EFI is planning a demonstration in Amsterdam on October 30th. The “anti-fascists” (antifa) are promising a violent confrontation against the defenders of Geert Wilders. For previous articles about the “anti-fascist” thugs, see the bottom of this post.

Below is a press release from EFI about the demonstration on October 30 (a Dutch version of this press release may be read here).

The European Freedom initiative will demonstrate at Museumplein, Amsterdam on 30 October from 2pm — 5pm. The action will be mounted in support of freedom of speech, and particularly in protest against the outrageous treatment that Geert Wilders has received at the hands of the Dutch state. The intimidation of political dissidents has become a serious problem across Europe and this is something that needs to be opposed.

Since the European Freedom Initiative (EFI) announced its intention to stand up for freedom of expression by demonstrating in Amsterdam so-called ‘anti-fascists’ have been planning counter demonstrations, and goodness knows what else! The EFI is a peaceful citizens movement made up of a diverse group of people from a number of European countries. It has come together in the spirit of international co-operation against a dangerous trend that has come to threaten our most cherished traditions of freedom.

Freedom of expression is the cornerstone of Western Civilisation, and the basis of our open democratic societies. Our political leaders have, for some time now, been undermining that freedom. Geert Wilders was brought to trial because he opposes the spread of sharia, and as a result he has faced intimidation via the judicial system. Many more citizens from across Europe face similar treatment at the hands of an overbearing state.

Antifa are well known across Europe for their violence and intimidation against those whose political beliefs conflict with their own and Antifa groups have pledged to oppose the EFI’s rally for free expression. The efforts of so-called ‘antifascists’, to demonise those who want to oppose the establishment of sharia norms in the Netherlands and across Europe, show a gross disregard for the principles of an open society based on fact and rational debate. It is necessary to ask why they apparently support sharia, which is a total system and not an alternative to a legal system based on equality? Do they really want this barbaric and iniquitous legal code to become entrenched in Europe? Do they believe in the equality of women, the right of people to be honest about their own sexuality, the right of people to have true freedom of religion, and their right to enjoy equality before the law? 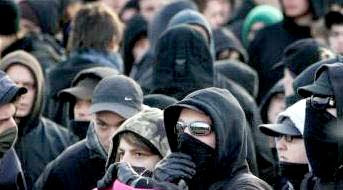 Left wing groups recently mobilised against Amsterdam Mayor van der Laans’ attempt to address the problem of squatting in Amsterdam. The result was extreme violence as the scenes at around 1:55 in this video illustrate, violence that is also reported in articles, here, here, here, and here. Some background information about Antifa can be found here, here, and here. How such groups that appear to have so little regard for private property and public safety can lecture others is truly astonishing.

The EFI will not be intimidated by the Antifa movement and is determined that people receive their right to protest and their right to be heard. Antifa does not have a veto on who can demonstrate and who cannot. It would be a sad day for democracy if violent groups are allowed to interfere with the right to protest.

The well being of rally participants, counter protestors, and members of the public, is a key consideration for the event organisers who want to ensure a peaceful and enjoyable demonstration. The EFI has been liasing closely with local officials and police to help ensure that the event runs smoothly and with minimum disruption. The EFI will have its own stewards in place to help the police to maintain good order and the its motto for the day is ‘safety first’.

It is intended that the event will be a celebration of international co-operation in the fight against tyranny and tyrannical systems. It will be an opportunity for those who have been ignored by the political establishment to have their say and to make their voices heard. Politicians should listen to their electors and not call them names for raising inconvenient facts.

EFI looks forward to a successful and peaceful demonstration in Amsterdam on 30 October.