Our Flemish correspondent VH has translated a batch of material about the sordid political machinations that lie behind the trial of Geert Wilders. The translator includes this note: 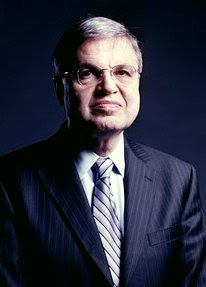 These articles show that the trial is, as one would expect, a political process with the aim of undermining Wilders and thereby indirectly the PVV.

It has become obvious the main villain is the Christian “Democrat” and outgoing Justice Minister Ernst Hirsch Ballin. It seems the (outgoing) Christian Democrats have indeed been playing a foul game.

The pit opens, and it gets dirtier and dirtier.

First, from an interview with Bram Moszkowicz, published in Trouw last week:

“My hands are itching”

“Absurd,” the Amsterdam criminal lawyer [Bram] Moszkowicz calls the indictment [against Wilders]. Because one must be able to say what a person wants, as long as it does not involve a call to violence. “If you do not agree with Wilders, then you should rather begin a debate with him. In Parliament, in newspapers, on television, anywhere. But not in the courtroom. Many of his most fervent opponents also agree with that. I think even the prosecution [Public Ministry, OM] is of this opinion. The prosecution actually did not want to prosecute, but still had to do so, by order of the court.” […] The Wilders case, says Moszkowicz, is in fact no more than a criminal file, of which over the years he has known hundreds. “But then with regard to the elements that make it a special matter,” he adds. Because the trial against the PVV leader is, according to Moszkowicz, “one of the most important lawsuits the Netherlands has known.” And even though Moszkowicz calls the prosecution “absurd”, he looks forward to the trial against Wilders, “My hands are itching”.

Q: What makes the case against Wilders such a major trial?

“It’s a very fundamental issue in an unexplored field. What may and may not someone say? That this arouses emotions is shown by the barrage of opinions. The timing, of course, also makes it special. We are dealing here with one of the most prominent politicians of the Netherlands, whom one tries to silence. Wilders is closely involved in the formation of the new government. The PVV almost became the largest party. Just imagine, then the prime minister would have had to appear in court.”

“Besides, I think I know that the fact that Mr. Wilders had been summoned even before the parliamentary elections was a deliberately planned action, which has been directed by the highest echelons of the OM [that might be the Justice Minister, Ernst Hirsch Ballin of the CDA —translator]. I can imagine that the desired effect would have been that in the elections Mr. Wilders received fewer votes. If, in that sense, Wilders speaks of a political process, I understand that very well.”

Q: And that ruling in the case is planned to be on November 2, the day Theo van Gogh died. What do you think about that?

“I had not realized that yet. The session days have been decided in agreement between me and the OM. I must nevertheless assume that this is a coincidence. At least let me say that I have not aimed at that date.”

Next, an opinion piece by Afshin Ellian (who was featured here a couple of weeks ago), from Elsevier, Monday, October 4:

I spent the entirety of Saturday watching the Congress of the CDA in Arnheim. It was an amazing congress. Who were most of the speakers? The opponents.

Why did the polls continue to indicate that most CDA’ers are for a government with the VVD with the support of Geert Wilders? Were those polls wrong? Of course not. Ultimately, a large majority of attendees to the congress voted for participation in that government.

Why were most of the speakers against the agreement? This is precisely the problem of the Netherlands. The supporters of Wilders do not dare to express themselves.

This can also be seen in the media. Only 32 percent were against the government-agreement. And 68 percent were for participation in the government by the CDA. But this percentage we did not see represented in the number of speakers.

It is really distressing that a large number of citizens are afraid to express their opinion. Only a single person dared to articulate the concerns of citizens. This was a woman who during her contribution referred to the insecurity, and especially lack of civilization in public transport. “This is not our set of norms and values,” the lady said.

Why is it scary when people do not dare to express their opinion? Because accumulated anger with a large number of people is a dangerous matter.

Is it any wonder that people do not dare to express their opinion? No. Today, parliamentarian Geert Wilders is standing trial because of his opinions.

Back to the CDA: 68 percent voted in support of Maxime Verhagen [CDA party leader and negotiator] and the majority of the members of the CDA parliamentary fraction. You would think that the problem is resolved. Democracy has spoken. Even 52 percent would have been enough. That is the way democracy works.

Yet later we see in the comments of the two dissidents [in the CDA fraction] and Ab Klink [who as co-negotiator suddenly tried to block negotiations and later stepped out the CDA-fraction], conscientious Ab, that they find the opinion of 68 percent of CDA’ers irrelevant.

How can you act conscientiously in a democratic order when you despise democracy? Ab, can you answer that for me?

The ‘Ab group’ is engaged in a coup within the CDA for the elimination of the incoming government. Even now it is suggested [especially by outgoing justice minister Ernst Hirsch Ballin [1]] that Ab and other opponents must return to the Parliamentary fraction to torpedo the formation of the government.

This is a pure coup via legal means. What is legal is not necessarily legitimate. The legitimacy and legality of the CDA parliamentary fraction (there a majority decides), especially since the congress, cannot be doubted.

Just imagine that there are five people, who on the basis of democratic rule want to make a decision to visit a friend. The result is 3 to 2. The decision was made and they want to leave. But the two losers begin to stab the tires, to prevent the decision of the majority from being executed.

Those two may have the right to do that just because they own the car. But the legality does not make their act legitimate.

The word democracy in the name of the CDA is now at stake. According to democratic rules, the loser accepts the majority decision. Those who execute the coup do not want to leave the CDA, but to take it over. Ab Klink and his little friends despise the democratic decision of the congress.

It is shocking to see how some prominent CDA’ers want to set aside the basic principle of tolerance. What is that? The principle of democracy: the minority will accept the majority decision.

This political coup will make the CDA fall into chaos. Because there are no circumstances under which the VVD may or can govern without the CDA. That CDA is an unreliable club of people who despise the democratic tradition in their own ranks. Why, then, should the VVD trust them?

Better a ‘purple-plus’ [CDA plus Labour and extreme left wing parties]. A pity, but it is the only solution. Such a ‘purple plus government’ will after a short while arrange its own fall.

The coup plotters want a ‘cordon sanitaire’ against the PVV. But how long can you sustain that when your own electorate is defecting to the PVV?

If the conspirators succeed, then the CDA will be out for a long while.

PS. Now I understand better what forces were at work and with what motives were employed within the CDA at the time of the Fitna controversy. The last word has not yet been spoken on this.

Hirsch Ballin was consulted over the trial

Outgoing Minister Ernst Hirsch Ballin (Justice) was personally involved at a very early stage in the decision-making on whether or not to prosecute Geert Wilders.

The information has quite a bit of piquancy, because in our country the justice minister habitually keeps a necessary distance to prevent exposing the OM to changing political influences. In addition, with this information a different light is shed on the role of Hirsch Ballin as one of the fiercest CDA opponents of tolerating the support of Wilders’ PVV [for a new coalition government].

On March 14, 2008, the prosecutor-general and the prosecutor in Amsterdam emailed each other on the advice of Rick Lawson, professor of European Law at the University of Leiden. Lawson was asked by the OM for a mapping on whether prosecuting of Wilders would have a chance. On the last page of his ten pages of analysis, Lawson concluded that it is “well-founded to prosecute Wilders”.

This opinion was received with cheers by both prosecutors, as can be established from the email correspondence: “What a superb piece!!!!” And: “Monday there will be a meeting with the Minister of Justice about this advice. We will try with all we have to provide as much input as possible to Harm Brouwer (OM chief) for this conversation. Everything is welcome.”

Wilders’ lawyer Bram Moszkowicz is stunned by the internal information. “From this it shows that not only that at the highest ministerial level the possible prosecution of my client was discussed, but moreover that there has been a substantive degree of political involvement in the decision to prosecute.”

Despite Lawson’s analysis, the prosecutor decided not to prosecute Wilders. The court, however, later ordered it to do so.

According to a spokeswoman for OM, there is nothing strange about the involvement of Hirsch Ballin. “In cases with a social impact, it is very common for the OM to discusses and exchange views with the minister. He is politically responsible for the OM and is regularly called to Parliament to explain why something will or will not be prosecuted. Also, when it concerns a prominent politician. The law provides that if the Minister disagrees with the OM, he may give a directive for an alternative action, which in this case has not happened.”

3 thoughts on “Legality Does Not Guarantee Legitimacy”