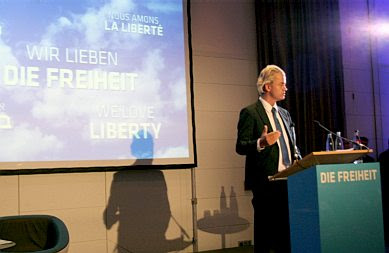 A number of representatives of the Counterjihad Collective (including several members of ICLA) attended today’s events in Berlin. The occasion was a speech by Geert Wilders to a group of about five hundred people, sponsored by René Stadtkewitz and his new political party, Die Freiheit. 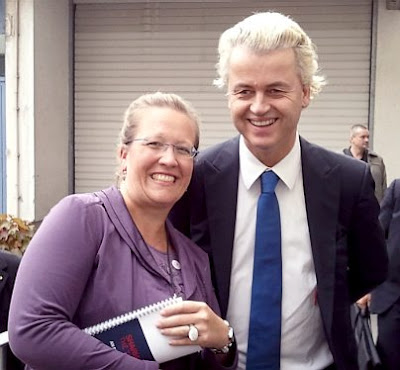 As you can see from the photo above, Elisabeth Sabaditsch-Wolff was one of those present. She says she was able to discuss the hate-speech charge against her with Mr. Wilders, and the two of them compared notes on their respective cases.

Although the two cases differ considerably in scale, they are similar in other respects: each defendant being is prossecuted for purely political reasons, at the whim of the state and its prosecutorial apparatus. Each is being targeted for speaking out against the Islamization of their countries. Their prosecutions are an attempt to appease the Islamic lobby and satisfy the requirements of Orthodox Multiculturalism. 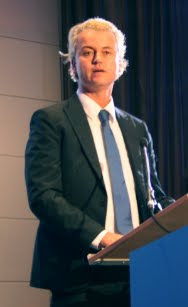 Delegates came from all over Europe to hear the speech. The ICLA group included people from Denmark, Sweden, Finland, France, Austria, and Switzerland. Of the various anti-jihad political parties, the Danish People’s Party (Dansk Folkeparti, DF), the Swiss People’s Party (Schweizerische Volkspartei, SVP), and the Sweden Democrats (Sverigedemokraterna, SD) were represented in the audience.

The stars of the day were, of course, the Party for Freedom (Partij voor de Vrijheid, PVV), and the new party hosting the event, Die Freiheit. The latter was recently formed by the Former CDU politician René Stadtkewitz, the former CDU security specialist Marc Doll, and a former member of the board of the Pirate Party, Aaron Koenig.

The entire oligarchical establishment of Germany, the Netherlands, and the rest of Europe is arrayed against them, ready to use the power of the state and its shills in the media to bring them down by any and all means necessary.

But the wind is at their backs — you can feel it now, all across Europe. The self-appointed enlightened elites who run the EU may not realize it, but the Counterjihad is not going away. It has grown unimaginably quickly during the last four years — and it’s just getting started. 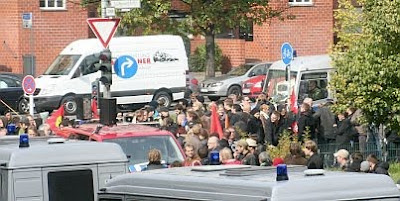 As you saw in the Al Jazeera report earlier, “anti-fascist” protesters showed up in front of the venue. However, several eyewitnesses report that their numbers were very small — “pathetic”, even, according to one observer. They were outnumbered by the police.

One of the bystanders said, “There are five hundred antifa-affiliated organizations in Germany. They don’t even have one from each of them here — that’s pretty sad.”

Photo credits: The Counterjihad Collective for ESW & Geert, Europe News for the other three.

32 thoughts on “Dispatches From Berlin”