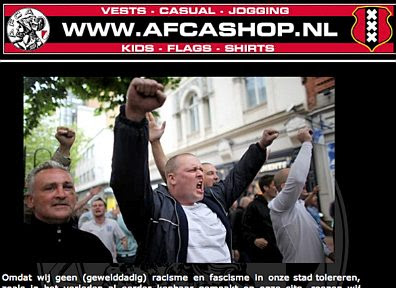 Our Flemish correspondent VH sends this report about an organized group of Dutch football supporters — “hooligans”, according to some observers — who have been roused by the words of the mayor of Amsterdam to organize a push-back against the EDL at tomorrow’s demonstration:

If I understand it correctly, as of the “Nieuwsuur” presentation, Antifa had not yet filed a permit for a demo, and the Mayor urged them to do so. With his “football-hooligan” spin he woke up the supporters of the Ajax/AFCA organization (or at least its supporters’ “leadership”). 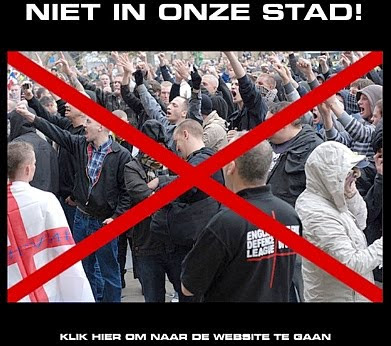 Here’s a translated article from the AFCA website. It’s dated October 28 — which is well after the mayor publicly said he had “solid indications” hooligans would show up:

“Because we do not tolerate (violent) racism and fascism in our city, as in the past already has been expressed on our site, we call each AJAX-supporter with some balls on to next Saturday show that we do not agree with this demonstration. Gather at 13:00 at the station Sloterdijk and form there the trip will be made towards Gerneratorweg.

Note: no violence against police and/or ME (mobile unit; riot police), we only plead for our city, and in this case do not tolerate the EDL in our city!

This message does not mean that we as AFCA are ANTI or PRO Wilders, we are only are against these kinds of Mongols who are rousing public feeling …”

Now the mayor has to stop those “Ajax supporters” — or whoever poses as such — from siding with the fascists of Antifa in threatening an officially permitted demonstration.

9 thoughts on “Ajax vs. the Mongols of the EDL”