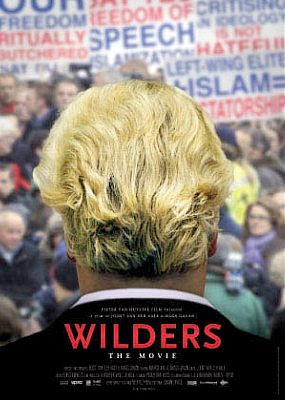 Back in May, in the post “Reds Rebel Against Geert Wilders” (based on excerpts from PI News), the Dutch investigative reporter Sukarno dug into the background of a media outfit called “Red Rebel Films” that was preparing a documentary about Geert Wilders and the PVV. His conclusion:

Expect a Red Rebel hit job on Wilders that tries to discredit him based on the people who support him.

The film is now scheduled for release on Sunday, and a trailer has been posted on the internet. Our Flemish correspondent VH has been watching for the release of the film, and now says that Sukarno was exactly right.

VH begins his report with a summary of the film and the tactics the directors used against Mr. Wilders:

There is no other topic. It is “a Red Rebel hit job on Wilders that tries to discredit him based on the people who support him”.

In his approach to various European and American anti-jihad activists, the RedRebel filmmaker Joost van der Valk described the project as “an objective look at the Dutch politician, and not an attack piece”. He and his colleague Mags Gavan were hoping to interview bloggers, commentators, and authors for a documentary about Geert Wilders. Joost van der Valk explained to prospective interview subjects that his film company “was working on a programme for Dutch Television (VPRO) about the PVV and other similar parties which strongly oppose Islam in Europe“.

But, as expected, the RedRebel documentary is only about the PVV and Geert Wilders.

RedRebel describes the documentary as follows: “ […] The world has a picture of lovely liberal Holland: Freedom of sex, drugs and politics. But Holland has shot to the right, led more than anything by one extraordinary man: blonde bombshell Geert Wilders. From the moment he was banned from Britain until his huge success in Holland’s latest elections, Mags [Gavan] and Joost [van der Valk] have followed him in a game of cat and mouse to find out: who is the real Geert Wilders?” 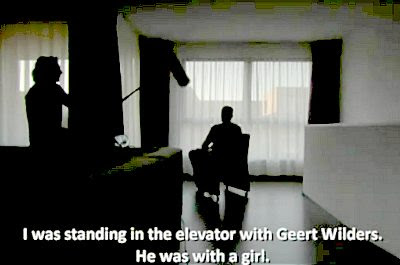 And to discover that, among other things they staged an “anonymous” interview with someone suggesting he had once encountered Wilders in a lift accompanied by someone the anonymous man “knew was a junk[ie]: “—”At a certain moment I was standing with uh… Geert Wilders in the lift, with a girl, who was known to me uh as a junk[ie] so to speak, and who uh… walked the streets” [trailer, 01:25—01:34]

Mags Gavan (co-director) and Joost van der Valk worked on this 80-minute film together with Pieter van Huystee. “This Teledoc of Pieter van Huystee Film (for which also does he publicity [curien@pvhfilm.nl]) and the VPRO [broadcaster] was realized with financial support from the Dutch Film Fund and the CoBO Fund.” [source]. The Executive Producer in fact is Annemiek van der Hell (annemiek@hell-o.nl), who was reported earlier to have been working in April 2010 “on a documentary by Joost van der Valk on the PVV of Geert Wilders.”

Note: Joost van der Valk has been photoshopped into the above still. He can be seen highlighted to the left, the man with the arrogant look.

Now for various related articles from Dutch-language sources. VH’s first translation is from the VPRO blog:
– – – – – – – – –

Geert Wilders knows how to generate both national and international debate, anger, and admiration. During the most recent elections (June 2010) his Party for Freedom (PVV) was the big winner. Filmmakers Joost van der Valk and Mags Gavan became fascinated: who is Geert Wilders, who are the people who vote for him and how does it happen that he is so successful? In Wilders, the movie the filmmakers examine the motivations of Wilders and his followers.

Who feels attracted to the ideas of Wilders, and what does the growth of the PVV signify for the Netherlands? Through voters, fellow party members, colleagues, and an investigation into Wilders’ past, the filmmakers try to understand the Wilders phenomenon. Wilders, the movie is not a political pamphlet and also not a moralistic or demonizing statement; it is a portrait of Geert Wilders and his hitherto invisible voters.

[screen dump is below] 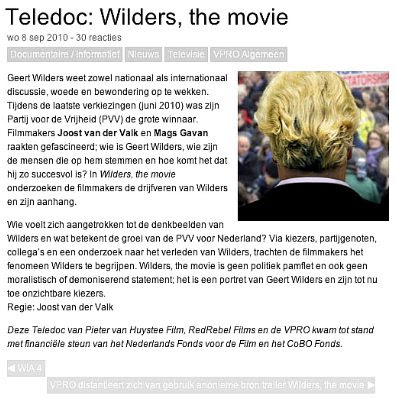 The VPRO announced that on Sunday, September 12 the documentary Wilders: The Movie about Geert Wilders will be broadcast. The trailer for the documentary raised a lot of controversy, for the film suggests that Wilders shares his bed with heroin-addict hookers.

The VPRO has cut the fragment — in which an anonymous man can be seen who makes the allegations — from the documentary. The man who appears only in silhouette, says that he has seen him in an elevator standing with “a girl who was known to me as junk and hooker.”

In the trailer, which already is on YouTube, the fragment is still in place [note: the clip however, was immediately taken down after publication of this article, but a copy has been uploaded a few hours ago here, also embedded above].

Spokeswoman Marloes Steverink explains that the “heroin-hooker-fragment” has been removed from the documentary, because the allegation could not be proven.

The trailer will now be adjusted. “The fragment ended up in the trailer by mistake,” says producer Pieter van Huystee to the Dutch newspaper De Volkskrant.

Director Joost van der Valk and filmmaker Mags Gavan want to paint a profile of Geert Wilders and his constituents in their film. The documentary is sponsored by Nederlands Fonds voor de Film [Dutch Film Fund] and CoBO Fonds.

Previously, Professor Meindert Fennema published a book on Wilders, De Tovenaarsleerling [“The Sorcerer’s Apprentice”]. In this, Fennema says, without much factual substantiation, that several female journalists, party officials and MP’s from other parties would, according to Fennema, be eager to spend a night with Wilders. [see also “Meindert Fennema analyzes Wilders”]

Always good fun, a Green-Leftist who boasts of his professorship, lives in a priceless villa in Aerdenhout [a village known for its expensive villas] and then, in a completely objective way of course, analyzes Geert Wilders. Meindert Fennema, full-time left-winger and former CPNer [Communist Party Netherlands, merged with the Socialist Pacifists (PSP) and evangelical Christians (EVP) in the party ‘GreenLeft’] has, without even speaking with Wilders, written a political biography about Geert Wilders. The anti-Wilders pamphlet book finds its main source not in truth but in the monologues Fennema has with himself. Despite all this, the professor calls his book ‘scientific’. 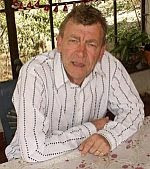 “Wilders actually has become the face of the sentiments against foreigners,” as we read in an interview with Meindert Fennema in the newspaper De Volkskrant. Thus the leader of the PVV is a vulgar racist. Well, we hear that again. Nevertheless Fennema also notes that Wilders partly bases his radical stance on the experiences he shared with Hirsi Ali. That has opened the eyes of Wilders [thereby completely ignoring the fact that as far back as the late nineties Wilders warned about radical Islam]. The conclusion that the PVV leader is thus struggling against Islam on principled grounds, comrade Meindert leaves unnoticed.

The ‘scientist’ medicalizes Wilders’ behavior [as in the USSR the politically correct (called politicheskaya pravil’nost in Stalin’s Socialist Republic) did with their dissidents — translator] and speaks as if he is qualified to diagnose Wilders. He also then skillfully determines that another cause of Wilders’ radicalization was the threats made to his address. Previously, politicians remained silent when they were threatened, as Fennema seems to know, to then conclude almost indignantly that Wilders keeps on going. Yes, and then you thus become radical.

Incidentally the UvA professor [Vrije Universeit van Amsterdam; “Free University of Amsterdam,” quite a left-wing ‘elite’ breeding ground] mentions Wilders has had affairs with other women, of course without mentioning any source. To the newspaper De Volkskrant Fennema says: “I cannot say anything about that. Apart from it being true.”

Science and defamation have seldom got together this close.

Also from the VPRO blog:

VPRO dissociates itself from using anonymous sources in trailer ‘Wilders, the movie’

The VPRO dissociates itself from the use of an anonymous source suggesting that Geert Wilders would have contact with prostitutes in the trailer for the VPRO documentary Wilders, the movie. The images of the man who claims to have stood in an elevator with Geert Wilders with a junkie who was a hooker, are not included in the documentary now, because the allegations could not be substantiated.

The documentary will be broadcast Sunday, September 12 under the responsibility of the VPRO. In consultation with the VPRO, the producer has now changed the trailer.

Transcript of the section that was erased:

— “At a certain moment I was standing with uh… Geert Wilders in the lift, with a girl, who was known to me uh as a junk[ie] so to speak, and who uh… walked the streets”