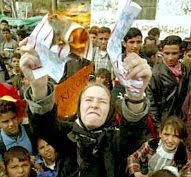 Most people are familiar with the tragic case of Rachel Corrie, an American “peace activist” who was backed over by an Israeli bulldozer and killed when she was in the Gaza Strip acting as a human shield against the destruction of Palestinian houses.

As several photos of Ms. Corrie reveal, she not only sported the keffiyeh — a length of cloth with a distinctive pattern representing “Palestine”, and worn as a neckerchief or other trendy accessory by leftists — she also veiled herself in the hijab, Muslim-style.

This always made me wonder about the back-story of Ms. Corrie’s involvement with Palestinian “peace” activism. When you see a woman wearing hijab in a Muslim context, it’s not only signal that she is an observant Muslima, obeying the strictures of Islamic law concerning the modesty of women. It also indicates that she is the property of a man — her husband, brother, father, son, or other male relative. An uncovered woman is a “whore”, fair game for the first man who happens upon her. A covered woman is protected from such assaults, but only because access to her is guarded and controlled by a man recognized under sharia as her legal keeper.

Chances are that when Rachel Corrie arrived in the territories, whether she slapped on a hijab or not, she was fairly quickly acquired by a local strongman in the area she chose for her “protest”. She would have been considered an especially choice target, being young, not unattractive, and blonde — all characteristics that rich Arabs are willing to pay good money for.

All of the above must remain mere speculation, since Rachel Corrie will never be able to reach a wiser maturity and write her memoirs about what really happened to her. However, from the following article in Arutz Sheva, we catch a glimpse of what befalls young naïve “peace activists” of a similar stripe when they arrive in the territories:

Two activists have exposed a disturbing phenomenon that they say is an open secret within the “peace camp”: female “peace” activists are routinely harassed and raped by the Arabs of Judea and Samaria with whom they have come to identify. They say the phenomenon has gotten worse lately and that many foreign women end up as wives of local Arabs against their will, but cannot escape their new homes.

Roni Aloni Sedovnik, a feminist activist, penned an article in News1 – an independent website run by respected investigative reporter Yoav Yitzchak – under the heading “The Left’s Betrayal of Female Peace Activists Who were Sexually Assaulted.”

“A nauseous atrocity has been going on for a long time behind the scenes at the leftists’ demonstration at Bil’in, Naalin and Sheikh Jarrah [Shimon HaTzaddik],” she writes. “A dark secret that threatens to smash the basic ideological values upon which the demand to end the occupation of the Territories rests.”

Now, why has this remained a “dark secret”? There are numerous witnesses to what goes on in “Palestine”, and not just Muslims or other young women in a similar bind. In the photos taken immediately after the accident that killed Rachel Corrie, you can see young Western men crouching over Ms. Corrie’s prostrate form. There are plenty of Western useful idiot males in the Palestinian environment who could blow the whistle on the “dark secret”, if they had a mind to.

But they don’t, and this is the result:

It turns out, she explains, that when female peace activists from Israel and abroad come out to Judea and Samaria and demonstrate against the Israeli “occupation,” they are assaulted sexually by the Arab men whom they have come to help. These are not isolated incidents, Aloni-Sedovnik stresses. Rather, this is an “ongoing and widespread” phenomenon that includes verbal and physical abuse. She accuses the ‘peace’ camp of purposely covering up the trend so as not to offend “the Palestinians and their heritage, which sees women as sexual objects.”

That is, the primacy of political ideology and the maintenance of solidarity are more important than whether the young women in their midst are systematically exploited as sex objects.

That’s the Left for you.

Aloni-Sedovnik cites two specific cases which she has knowledge of – one is a case of rape and another is “severe sexual harassment.” The attackers in both cases, she stresses, were familiar with the victims and knew that they were “peace activists.”

The rape occurred several months ago in the village of Umm Salmona, near Bethlehem. The victim, an American activist, wanted to press charges but leftist activists put pressure on her not to do so, so as not to damage the struggle against the ‘occupation.’

The second case involved an Israeli activist who took part in the demonstrations at Shimon HaTzaddik neighborhood in eastern Jerusalem, where the High Court ruled that Jewish families may move into homes that they have owned for generations. This woman filed a complaint with the police but retracted it after “severe and unfair pressure” from the demonstrations’ organizers, according to Aloni-Sedovnik. Furthermore, the organizers appealed to demonstrators to dress modestly when they come to the Arab neighborhoods and suggested that they wear head scarves.

Unfortunately, wearing headscarves by itself is not enough: every veiled woman must also have an owner. If a woman is lucky, she will find a protector who is interested in her only for her political value, and become attached to him. But obviously this is not always the case.

Aloni-Sedovnik accuses the Israeli media of complicity in the cover-up.

“How is it that we do not hear the voice of the radical feminists who repeat, day and night, that occupation is occupation, and it does not matter if it is a nation that is doing the subjugation, or a man who is subjugating a woman?

How indeed? Whence this Silence of the Feminists?

“It appears that there is a gap between the radical-leftist feminist theory about the active resistance to the occupation of the Territories, and the stuttering self-annulment in the face of the violent conquest of women.”

The gap is unbridgeable: Marxist ideology — including its modern offshoot, Multiculturalism — trumps the rights of women. We saw a version of the same phenomenon in the 1970s, when even the most gung-ho feminists ignored the way American black revolutionaries treated their women. Smashing the state was more important than the rights of women back then, and it still is today — especially when the state is the Zionist Entity.

Earlier this year, a blogger and literature buff named Yehudah Bello, who writes in various venues about history and the theory of evolution, wrote a blog post with the striking title: “The Female Leftist Activists are Raped Day after Day, Night after Night.” Bello is no ultra-nationalist, and he supports the creation of a PA state – a fact which makes his claims all the more believable.

Most female leftist European activists, writes Bello, are brainwashed in their youth into hating Israel, and then sent directly into Judea and Samaria, without spending a single night in Tel Aviv, lest they see civilian Israeli society for themselves and find that they like it. They are whisked off to Shechem, Jenin and other PA towns and housed in Arab educational or cultural facilities, or private homes. Local Arab girls are sent to befriend them and they have no choice but to trust them.

It is easy, explains Bello, “to carry out a sexual crime against a foreign girl, in her first days away from her family, in a place where no police have ever visited. And this is what happens, and has happened.”

“These are not just cases of rape carried out to satisfy lust,” he writes. “Usually, they are carried out systematically in order to make the girl pregnant and then take her as a wife – after she converts to Islam, of course. We know about this system from the stories of women who underwent a similar process within Israel and escaped to Europe. But it is hard to escape from the Palestinian territories. Sometimes these women – some of whom are no longer young – are never allowed to leave their homes unaccompanied, in order to forestall their escape.”

If someone were to compare the list of foreign female activists who enter Judea and Samaria to the list of those who leave, Bello claims, the magnitude of the phenomenon would be proven. “Everyone knows about it, but no one dares talk about it…”

“Everyone knows about it, but no one dares talk about it…”

This is the heart of the matter. As in everything else concerning Islam’s impact on the West, the problem is not Islam itself, but the radical Left.

These young women could not be led like lambs to the slaughter without the cynical connivance of the international Socialist establishment, which is more than willing to break a few blue-eyed blonde eggs, provided they get to make their anti-Zionist omelet.

From Dymphna, an update to this post, based on Phyllis Chesler’s recent essay. She verifies and underlines the ugly truth here:

What is happening on the West Bank reminds me of the American 1960s, when idealistic young white and Jewish women, who thought they were volunteering for Martin Luther King’s non-violent movement for black civil rights, found themselves up against many angry, sociopathic, criminal, and sexually violent members of the Black Panther Party. I was one. I have my war stories.

Today, privileged, young, white, Jewish, and Arab women who travel to the West Bank to “protect” Palestinians from Israeli soldiers, also seem to be facing similar troubles. According to one recent and very disturbing report [note: this is the same report cited in our post, above], foreign (American and European) and Israeli Jewish and Arab left-feminists are being routinely harassed, raped, and even forced into marriage by the very Palestinians whom they have come to “rescue….

Ms. Chesler has her own experience in this mess. As a young woman:

I myself was once pressured by leading left feminists not to reveal that I had been sexually harassed and then assaulted by my United Nations employer.” It would not look good for (white) feminists to accuse a black man of what may only have been a cultural misunderstanding…” I nevertheless continued to demand justice-and was not supported by some of the very same feminists who years later would support Anita Hill against Clarence Thomas.

In other words, this repression of the reality of race-based and “cultural” brutality has been going on for fifty years.

So much for feminism. We need to walk it back to the very early feminists ideals and start over. Modern-day lefty feminists are deeply embedded in and part of the problem. They stopped being part of the solution during the very early days of the ‘60s “Revolution” when they failed to speak out about their own experience of abuse in order to ‘belong’.

In reality, it was just more of the same Bolsheviks cynicism two generations previous to the Civil Rights “revolution”. Only this one was more cynical than ever because the sixties couldn’t claim ignorance. They simply buried the truth of history.

It appears that no matter where you step on the left, you sink up to your neck in the muck of rotting, corrupt ideas that ought to have been given a decent burial long ago.

45 thoughts on “Peace Through Rape”